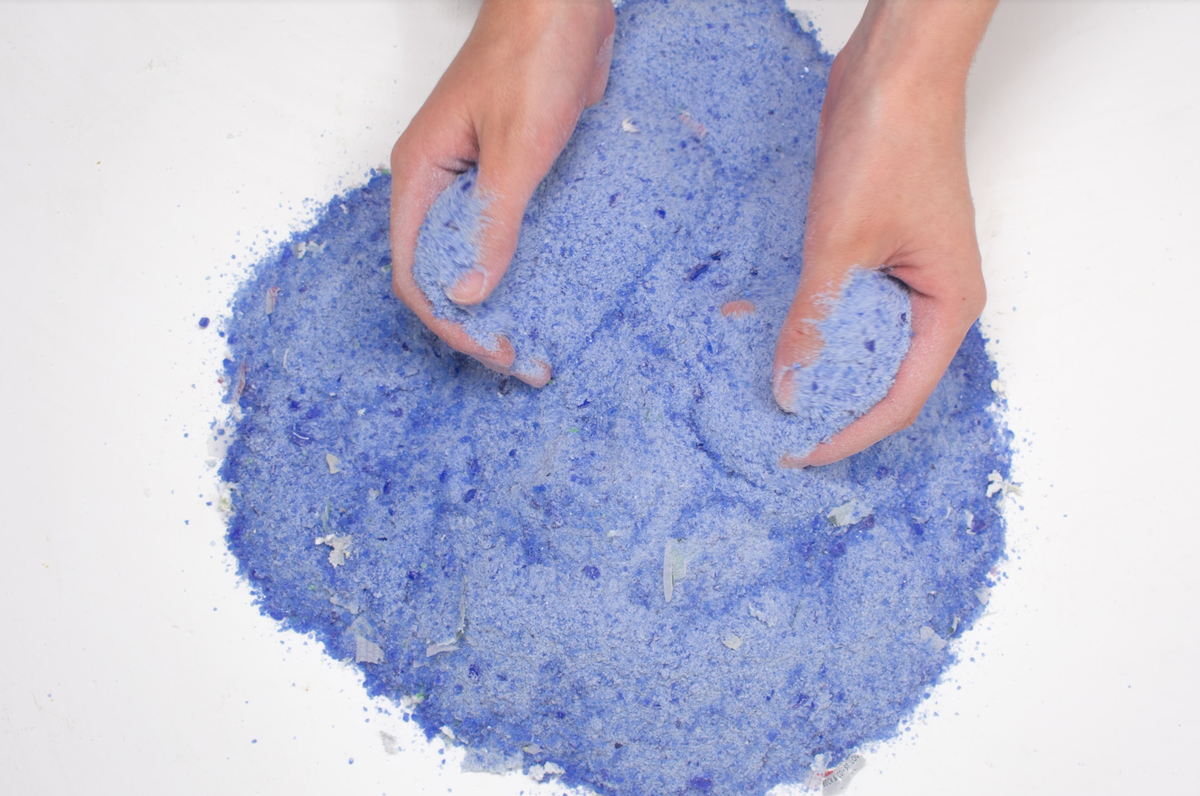 Like many great ideas, it began with a bottle of wine between friends.

“Max [Steitz] and I had been going to Tulane [University in New Orleans]. We were in the second semester of our senior year,” Franziska Trautmann, co-founder of glass recycling company Glass Half Full, tells The Independent.

“We were drinking a bottle of wine and realized that it would end up in a landfill, where all of our bottles of wine and beer ended up, because there was no reliable [recycling] option in the city nor the state.

“We were like, what if we could do something with this glass, turn it into something else or recycle it? That’s how we came up with the idea to turn glass into sand. Everyone needs sand, it’s a resource. Then after doing more digging, we realized there’s also a global sand shortage.”

The college friends founded the company two years ago and began by collecting glass bottles in their backyard. After raising $150,000 via GoFundMe campaigns, they were able to expand into a processing facility in New Orleans.

The aim of the bootstrapped recycling program is to cut waste and eventually help slow coastal erosion by returning glass bottles into sand. Ms Trautmann, 24, who grew up in the small town of Carencro in southern Louisiana, says she was motivated by the knowledge that her home state is losing a football’s field worth of land every 100 minutes.

Louisiana’s fragile shoreline is slipping beneath the water due to sinking land, erosion and sea-level rise, which is up to 24 inches higher in parts of the state than it was in 1950. New Orleans is the largest city at risk from sea-level rise in the US.

Even a few inches of sea-level rise can lead to more catastrophic storm surge from hurricanes, which are being whipped into more powerful, moisture-laden events due to the climate crisis. Research last month from Princeton University found that Louisiana, and also Florida, may now be more prone to such extreme events.

And as is repeatedly the case with climate-driven disasters, the poorest, most vulnerable and most disenfranchised populations are impacted first, and impacted the hardest.

In Terrebonne Basin along the Gulf coast, the US government is funding the resettlement of the Isle de Jean Charles band of Biloxi-Chitimacha-Choctaw Indians to higher ground as their ancestral Island vanishes below the sea.

Rebuilding the natural buffers of barrier islands, beaches and sandbars with sand and sediment will be vital in trying to beat back some of the increasing impacts from hurricanes and sea-level rise.

Extreme storms are already taking a toll on Louisiana’s attempts at sustainability. In the wake of devastating Hurricane Katrina in 2005, New Orleans stopped recycling for six years as most of the infrastructure had been wiped out. The recent category-4 Hurricane Ida, which slammed into Louisiana in August, also paused recycling in the city.

The majority of glass still piles up in landfill as there is no regional glass manufacturer to melt it down for recycling.

The problem goes some way to explaining the popularity of Glass Half Full. For $25 a month, the company picks up glass from homes and businesses, and the service has a long waiting list of New Orleans’ bars and restaurants who want to join.

The only thing slowing them down, Ms Trautmann says, is their small team’s operational capacity.

“We haven’t had an issue with demand yet,” she said.

Several days a week, the company also offers a free drop-off service. On a recent Saturday, 500 people showed up and they collected 15,000 pounds of glass .

“It’s a beautiful thing to witness,” Ms Trautmann said. “It’s mostly people from the New Orleans area but we also have people coming from as far as Lafayette and Baton Rouge. We will have families come and show their kids how to recycle.”

In total Glass Half Full have diverted more than 1m pounds of glass from landfills.

The company is sustained by its paid curbside pickup service. The local government in New Orleans is supportive of their work, Ms Trautmann says, but has yet to provide any financial support. Notable big checks have come from the Mike Rowe Foundation ($30,000), and another $10,000 from Corona beer.

The glass bottles are sorted by colour with corks, caps and tops separated out (labels don’t need to be peeled as they are sifted out in processing).

The glass then travels up a conveyor belt where it’s crushed and pulverized by machinery. What emerges is a mixture of sand and gravel, which is sifted depending on how coarse or fine it should be.

Glass Half Full say that while the average recycling facility throws away about 60-90 per cent of what comes through the door, they are sending less than 2 per cent of waste to landfill.

Ms Trautmann has amassed 95,000 followers with catchy TikTok videos about their recycling ops, under the name ecofran.

A recent post titled “Free Britney is a mood” – including a dubbed voiceover from the pop star – shows Ms Trautmann in front of mountains of glass in the warehouse, and the tubs of sand it becomes. The clip been liked nearly half-a-million times.

Half Glass Full sell their sand for sustainable construction to floormakers, landscapers and sandblasters. They also use it for sandbags which are doled out for free to New Orleans residents during hurricanes to help prevent flooding.

A large amount of the sand is currently being used in research into if the recycled glass can be used to restore miles of coastline.

Scientists are studying what impacts recycled sand has on fish gills, and if native plants can grow in it. Engineering experts are determining what may be the best locations to put the sand.

The project involves Glass Half Full, the National Science Foundation and Tulane and Jackson State university scientists, alongside the Pointe-Au-Chien Indigenous community in a bid to restore their land along the Gulf.

The project with the Pointe-Au-Chien community runs until May at which point Glass Half Full hopes to start on other restoration work closer to New Orleans.

“We’re losing all this land, we’re running out of sand, and we’re also sending all our glass to landfill for no reason,” Ms Trautmann said.

“What if we could solve all those problems with one solution – recycling glass into sand and using it to restore our coast?”

Opinion: The fight for indigenous peoples’ land in Brazil is everyone’s concern

How did the Thames recover from being a ‘dead’ river to homing venomous sharks?

How will China’s pledge to end its foreign coal plants impact the climate crisis?

Pictured: The incredible life-size Toyota Supra made out of LEGO – and it can be driven