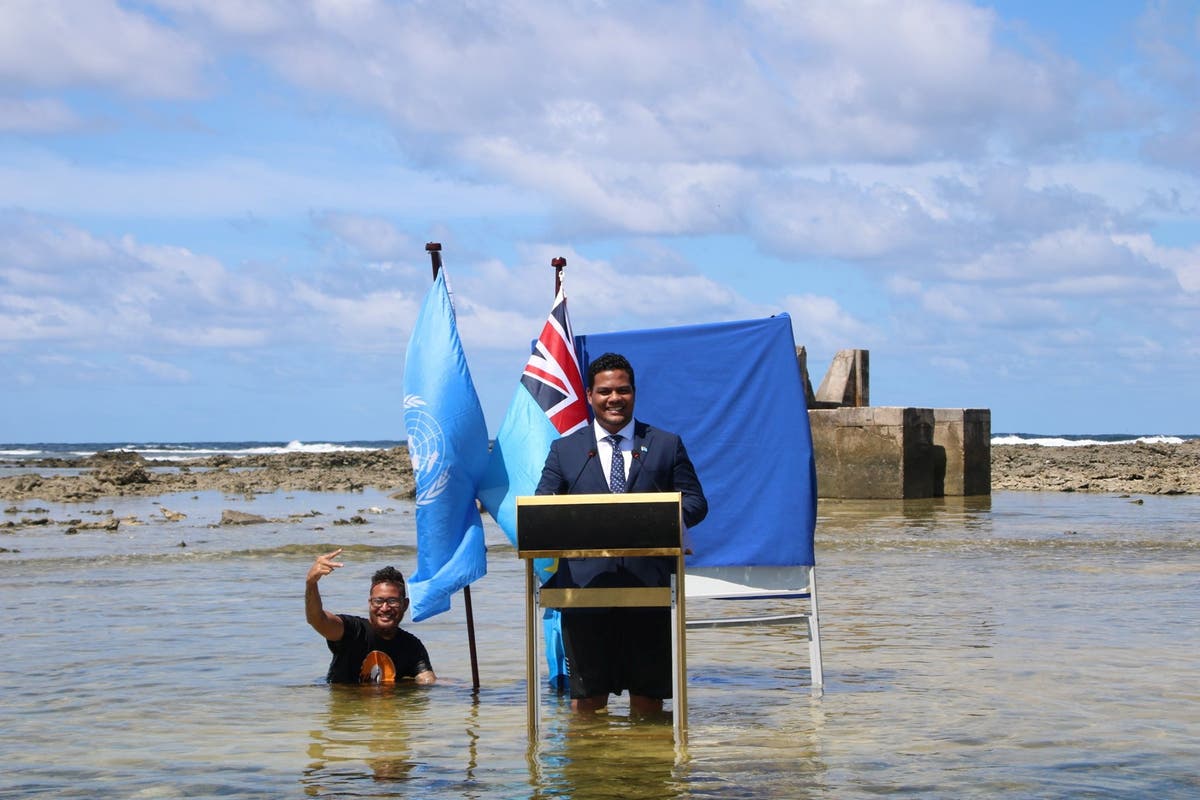 Tuvalu foreign minister Simon Kofe has delivered a speech to Cop26 while standing knee-deep in sea water to emphasise the impact of climate change on the island nation.

Images of Mr Kofe standing in a suit at a lectern set up in the sea and his trousers rolled up, have been shared widely on social media further intensifying calls for world leaders to urgently address issues of climate change.

“The statement juxtaposes the Cop26 setting with the real-life situations faced in Tuvalu due to the impacts of climate change and sea level rise and highlights the bold action Tuvalu is taking to address the very pressing issues of human mobility under climate change,” Kofe said of his video message to the conference.

The video was recorded by public broadcaster TVBC at the far end of Fongafale, near the capital Funafuti, a government official said. It’s due to be shown at the climate summit on Tuesday and comes as regional leaders push for more aggressive action to limit the impact of climate change.

Many big polluters have vowed to intensify their carbon cuts over the coming decades with some aiming for net zero carbon emissions by 2050. South Pacific island nation Fiji recently passed its Climate Change Act enshrining 2050 net zero commitments into law.

It has mandated the 100 per cent sustainable management of its ocean, with 30 percent to be designated marine protected areas by 2030. Neighbouring Samoa aims to be powered 100 percent by renewable sources within the next few years.

Only three Pacific leaders travelled to Glasgow for the Cop26 summit due to Covid restrictions. Palau, Fiji and Tuvalu engage in talks at the summit calling for cuts to greenhouse gases by major emitters.

Tagaloa Cooper, the director of climate change resilience at the Secretariat of the Pacific Regional Environment Programme, said it was “inequitable” that those most impacted by climate extremes would not be present at the summit.

For some countries the 1.5-degree threshold marked an ambition, but for the Pacific islands it was a “compromise” since they were already facing severe impacts from climate change. Failure to limit warming below that level could mean these countries will lose 30%-70% of their land-based economies and entire islands to rising seas, said Satyendra Prasad, Fiji’s ambassador to the U.N.

As heat waves intensify, tens of thousands of US classrooms will be too hot for students to learn in – Times of India

If endangered primates disappear, so will their parasites. That’s actually a problem

Judge throws out Trump-era approvals for oil project in Alaska

The entire Mediterranean region is burning. Here’s why it will get worse

‘Is that a bacon sandwich?’ Fruit flies react to smells while asleep

Flying cars: The future of green transit, or another rich guy fantasy?

‘I never get involved’: Peter Andre denies Katie Price’s claims that he ‘made money’ from her

WhatsApp Users On iPhone Are Getting This Feature Soon