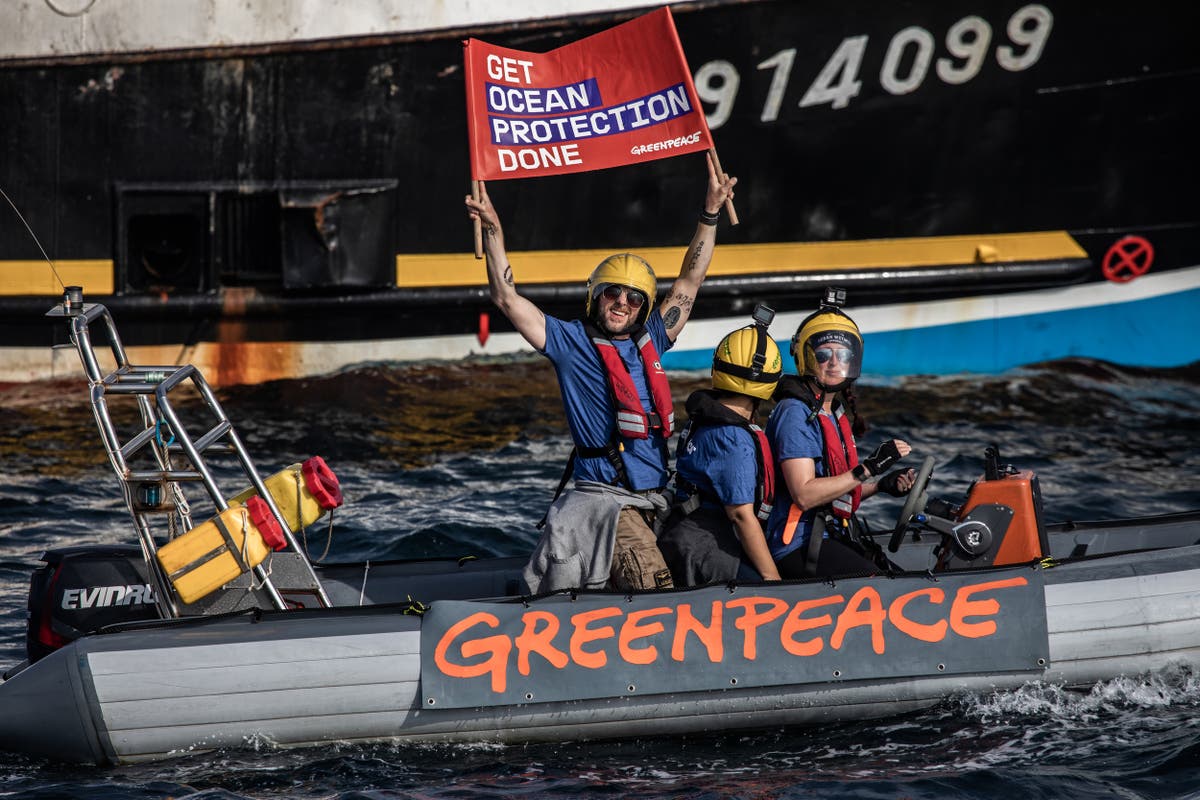 It’s early. The sun is shining, and in every direction all I can see is the sea. I’m driving a RHIB in the middle of the English Channel, watched closely by Greenpeace’s crew who are half keeping an eye on my driving and half watching the radar looking for the target – a fly shooter.

We’d set off at first light on Greenpeace’s newest boat, Sea Beaver. Before long, one of the Greenpeace crew spotted an interesting blip on the radar. A fly-shooter, and it had just been fishing inside a Marine Protected Area (MPA).

The crew springs into action and we steam towards the target. We want to document the fly-shooter hauling its catch, something that’s rarely done because the industrial fishing companies want to keep this destructive new technique out of the public eye.

Collecting this evidence is vital. It stops the companies which run fly-shooters from hiding their worst practices from the public and it gives campaigners powerful first-hand evidence to present to policy makers.

When I say fly-shooter, that probably conjures up images of someone bobbing around in a dingy with a fishing rod. That couldn’t be further from the truth. This docile sounding fishing method is one of the biggest threats to our oceans to emerge in recent years.

The experts tell me fly-shooting involves dragging heavy ropes along the seafloor, encircling entire shoals of fish in a single quick action. Efficient skippers can systematically empty vast swathes of the ocean of life.

I must confess, like most people, I had no idea what fly-shooting was until Greenpeace invited me to spend the day at sea with them, patrolling areas that are supposed to be protected and bearing witness to the destructive industrial fishing practices that our government continues to turn a blind eye to.

We’re facing so many crises, it feels easy to forget about our oceans. They’re so massive I think many assume us tiny humans pale into insignificance in comparison. How much harm could us little people do to something so vast, so powerful and so beyond our control?

The answer is a lot. Our oceans are at breaking point. Overfishing is driving fish populations to collapse, destroying habitats and worsening the climate emergency. Just one third of the UK’s key fish populations are healthy, and research has revealed that bottom trawling releases as much carbon as the entire aviation industry annually.

Yes you read that right. One form of trawling releases as much carbon each year as all flights globally.

When industrial fishing degrades habitats and empties the oceans of life, this not only harms nature, it also damages the oceans’ ability to absorb and store carbon. It disturbs vast “blue” carbon stores in the deep oceans, bulldozes habitats and decimates fish populations. Within a generation, there won’t be enough fish left for small-scale fishers to catch.

These fishers are the backbone of coastal communities, but they’re having their livelihoods devastated by industrial fishing. The fishers Greenpeace have been working with complain that nowadays they usually return home with empty nets, unable to cover their costs let alone make a living.

This is why south coast fishers and Greenpeace together have been calling on the government to ban fly-shooters and supertrawlers, vast floating fish factories, from the entire English Channel. It sounds like an unlikely alliance, Greenpeace and fishers, but they want the same thing – healthy oceans, full of life.

That’s why I decided to join Greenpeace at sea in the English Channel, to see first hand the harm industrial fishing is causing to our oceans and fishing communities.

If industrial fishing companies can keep their most depraved techniques out of the spotlight, the UK government will continue to turn a blind eye. The evidence we collect today will be an important part of raising awareness, and putting this destructive practice on the government’s, and public’s, radar.

We finally see the fly-shooter on the horizon. The crew sends up a drone and prepares camera equipment. They want to capture the haul when the nets emerge from the water.

We begin deploying banners, sending a message to the vessel that they have been damaging a Marine Protected Area. The Greenpeace skipper radios the vessel, asking them to stop fishing and return to port. This time, the fly-shooter’s skipper obliges and the vessel hauls its gear with us right next to it.

The nets, full of life, emerge from the water. It’s a horrific sight. Vast quantities of fish writhing around, compressed into a huge net being hauled up onto the fly-shooter. We got there too late to stop it before it started, but at least we’ve forced the fly-shooter to return home for the day.

Just as we are finishing up with this first vessel, we spot another blip on the radar. It’s a second fly-shooter. Once again, we steam off to confront this other fly-shooter. We send up the drone, get the camera equipment out, and deploy our banners to make sure the fly-shooter knows it’s being watched.

Once again, the skipper hauls the gear. They also agree to leave the area. We’ve done our job for the day. The fly-shooters are heading home and we’ve collected our evidence, so we head back to land to get warm and dry.

The Greenpeace crew will be back tomorrow, doing the government’s job for them and patrolling our supposedly protected areas. If only our government could get its act together, none of this would be necessary. We might have sent the fly-shooters packing for today, but they’ll be back.

Simon Pegg is an actor and activist, who is supporting Greenpeace’s campaign to stop industrial fishing from wrecking the oceans

One water bucket to find them all: Detecting fish, mammals, and birds from a single sample: Revolutionary environmental DNA analysis holds great potential for...

First global estimate of importance of pollinators for seed production in plants: About 175 000 plant species — half of all flowering plants —...

Line and hook fishing techniques in Epipaleolithic Israel: Site contains wide variety of hook and line shapes, as well as sinkers and lures

Opinion: Dubai’s fake rain offers hope that we can innovate our way out of the climate crisis

Banks getting fraud reimbursement decisions wrong in many cases, says Which?