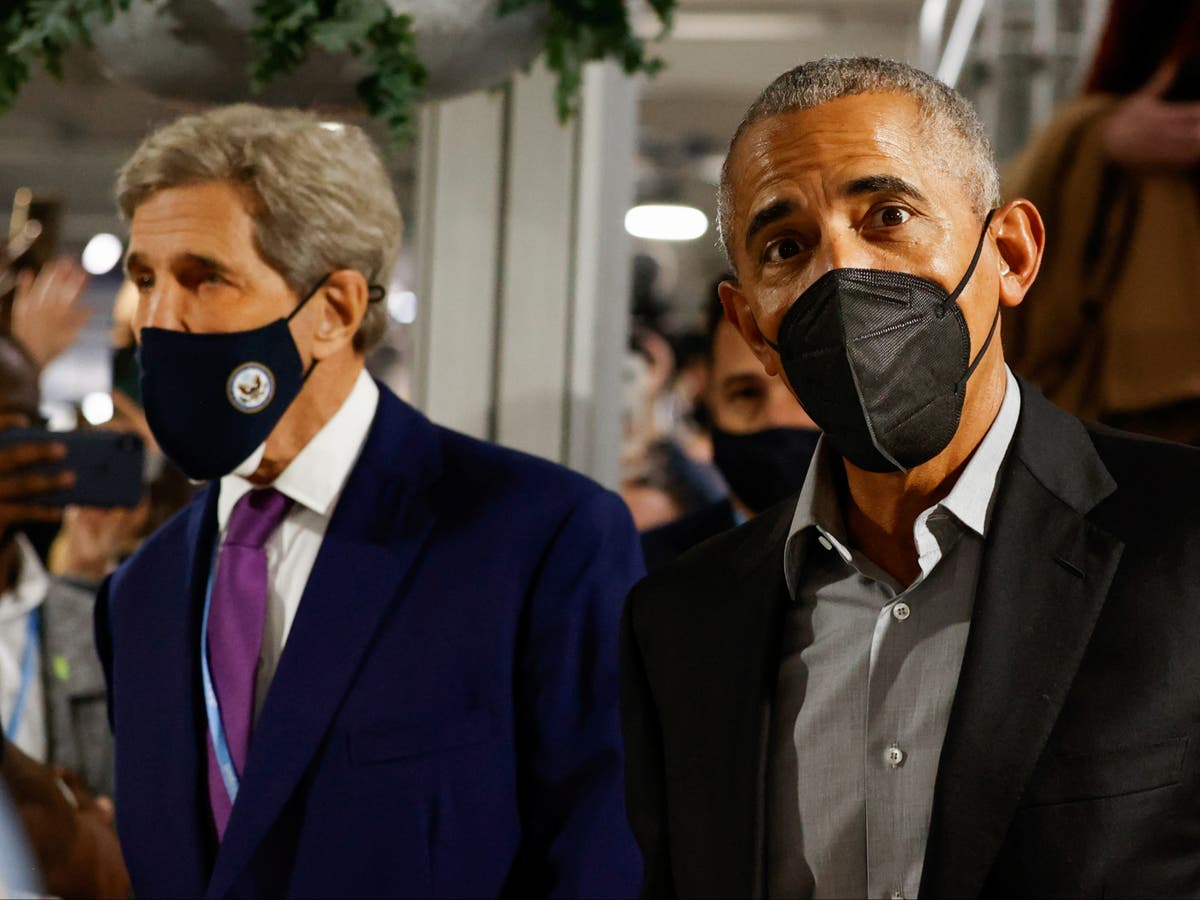 Former president Barack Obama has flown into Glasgow to attend Cop26, bringing political weight to the climate summit as the second week of meetings on the world’s biggest problems get underway.

Mr Obama played a major role in the delivery of 2015’s Paris climate agreement – widely regarded as a major diplomatic and environmental success.

With many world leaders and campaigners now having left the conference, including Greta Thunberg, who has returned to Sweden after a week in the UK, maintaining momentum, ambition and urgency among the negotiators and the governments and organisations they represent is vital.

Not least after a draft of the conference’s official text, was described on Monday by Greenpeace as “exceptionally weak”.

“Usually the text starts with some ambition, which then gets watered down,” said Jennifer Morgan, Greenpeace International’s executive director.

On Monday morning UN secretary general Antonio Guterres tweeted an almost poetic warning of the danger of letting the moment to act pass. Urging “solidarity” around the planet as the second week of the summit began, he wrote: “The sirens are sounding. Our planet is telling us something – and so are people everywhere.

“We must listen – we must act – and we must choose wisely. Choose ambition. Choose solidarity. Choose to safeguard our future and save humanity.”

Speaking on a panel at the summit, Mr Obama said that while the pledges made so far represent “real progress” if they are followed through, “not enough” has been done yet to avert warming of more than 1.5C.

He called for “ongoing activism” and “citizen pressure” on governments and the private sector to ensure they honour their commitments.

Urging governments to “act now”, he singled out island nations for “stepping up and being heard”.

Mr Obama said “we have not done enough” and the islands “are threatened more than ever”.

His address came immediately after Tuvalu’s foreign minister Simon Kofe delivered a speech to Cop26 while standing knee-deep in sea water to emphasise the impact of climate change on the island nation.

The theme for Monday is “adaption, loss and damage”, which the summit organisers say will aim to showcase the practical solutions needed to adapt the impacts of the worsening climate crisis, and also address loss and damage.

Announcing £290m of climate funding for developing nations, the UK’s international trade secretary Anne-Marie Trevelyan said on Monday the money “will empower and equip 40 million people with the means to adapt to the impacts of climate change”.

In an apparent bid to use this latest commitment as leverage for further pledges from those in the room, she said: “So I trust that through this dialogue today we can rapidly accelerate adaptation at a global scale.

“It is our responsibility to build a climate resilient future for all. Glasgow is a moment to build a movement, because we can’t afford to fail. Our time is now.”

Over the weekend, tens of thousands of climate protesters took to the streets in Glasgow, London and around the world in a demand for swifter action to combat the global heating crisis. In Glasgow, up to 50,000 marched through the city centre ahead of the final week of negotiations.

Rail workers to go on strike in Scotland during Cop26

Can climate fiction inspire a response to help save the planet?

Extinct ground sloth likely ate meat with its veggies: New study reveals that Mylodon was an omnivore, unlike its strictly plant-eating relatives

Mapping eukaryotic plankton globally in all their diversity

TikTok, YouTube and Snapchat defend impact on kids at US hearing