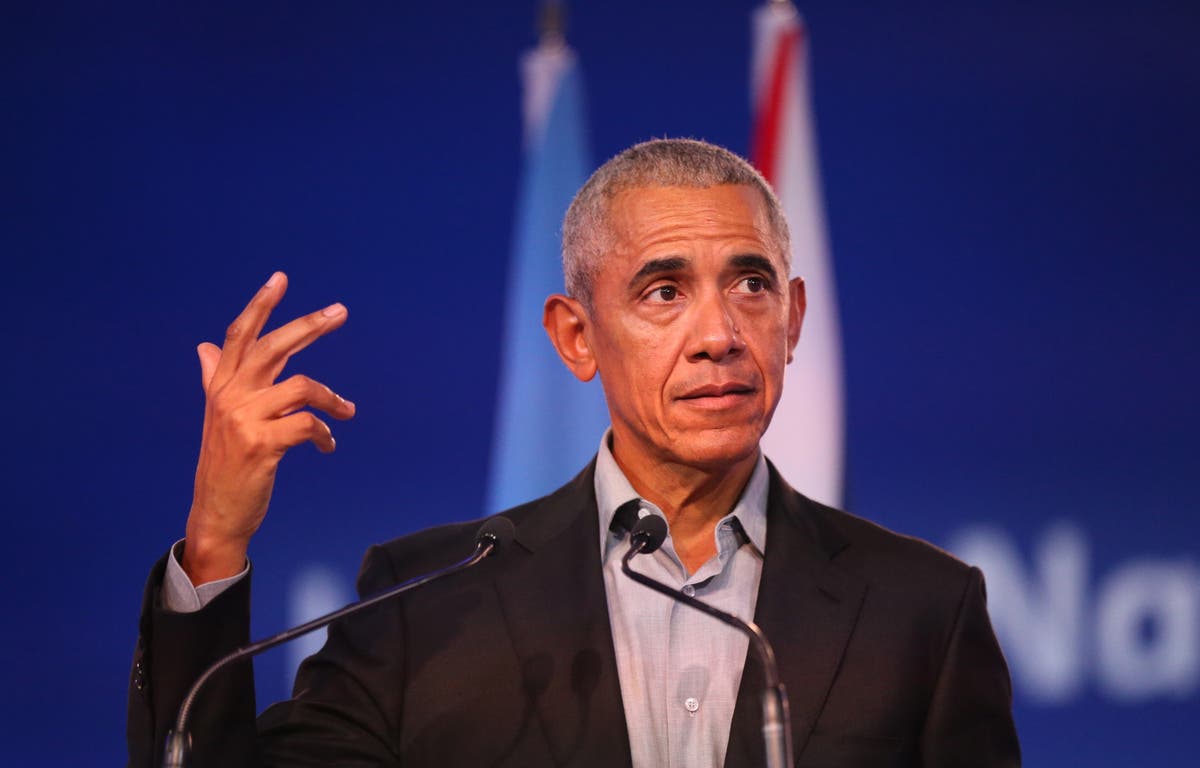 Barack Obama has warned attendees at the Cop26 summit that the world is “collectively and individually… falling short” in tackling the climate crisis.

The former US president entered the auditorium to rapturous applause as he prepared to address delegates at the beginning of the second week of the environmental conference in Glasgow.

The 60-year-old Democrat said he was glad “meaningful progress” had been made since talks for the Paris Agreement six years ago but that “time really is running out”.

He said: “We have not done nearly enough to address this crisis: we are going to have to do more, and whether that happens or not to a large degree is going to depend on you – not just you in this room, but anybody who’s watching or reading a transcript of what I’m saying here today.”

The clearly irked former two-term US president also took aim at his White House successor Donald Trump for pulling out of the Paris accords.

He said: “Some of our progress stalled when my successor decided to unilaterally pull out of the Paris Agreement in his first year in office,” he said.

“I wasn’t real happy about that. And yet the determination of our state and local governments, along with the regulations and investment that my administration had already put in place, we were able to keep moving forward despite hostility from the White House.”

Mr Obama said the election of his close friend, President Joe Biden, and the rejoining of the Paris accords meant that the US “is back” in the fight against climate change and that the country would now act “more boldly”.

Mr Obama also fired a broadside at China and Russia for not attending the two-week climate conference.

He said: “I have to confess, it was particularly discouraging to see the leaders of two of the world’s largest emitters – China and Russia – decline to even attend the proceedings, and their national plans reflect what appears to be a dangerous lack of urgency and willingness to maintain the status quo on the part of those governments. That’s a shame.

Mr Obama said the world could not afford anybody “on the sidelines” in the fight against climate change and that it was one issue that should “transcend our day-to-day politics” and differences.

The former president directly addressed young people in the room and those watching on television, saying they were the “most important energy in this movement”.

“My message to young people begins with acknowledging that you have a right to be frustrated,” he said.

“Folks in my generation have not done enough to deal with a potentially cataclysmic problem that you now stand to inherit.”

But, echoing advice his mother gave him, Mr Obama said: “She’d look at me and say, ‘don’t sulk, get busy, get to work and change what needs to be changed’. Luckily that’s exactly what young people are doing right now.”

In his closing comments, Mr Obama said that keeping global temperature rises limited to 1.5C “will not be easy”.

He said: “It is going to be hard. Existing political institutions move slowly, even when leaders are well intentioned.

“International co-operation has always made it difficult, it’s made even more difficult by all the misinformation and propaganda that can flood out through social media these days.”

He added: “Getting people to work together on a global scale takes time, and right now that’s time we don’t have.”

Referencing a line from Shakespeare’s Othello, Mr Obama said: “What wound did ever heal but by degrees?

“Our planet has been wounded by our actions – those wounds won’t be healed today or tomorrow or the next, but they can be healed by degrees.

“If we start with that spirit and each of us can fight through the occasional frustration and dread, if we pledge to do our part and then follow through on those commitments, I believe we can secure a better future. We have to.

“And what a profound and noble task to set for ourselves. I’m ready for the long haul if you are, so let’s get to work.”

Russia’s permafrost is thawing and revealing ancient secrets beneath

What are the biggest Cop26 stumbling blocks?

‘Anti-rust’ coating for plants protects against disease with cellulose nanofiber

Paradise lost: How the Turkish wildfires destroyed one of the most beautiful places I have ever seen

Unilever to bring in carbon footprint labels for food

Jeff Bezos is NOT an astronaut! FAA changes rules for how it awards astronaut wings