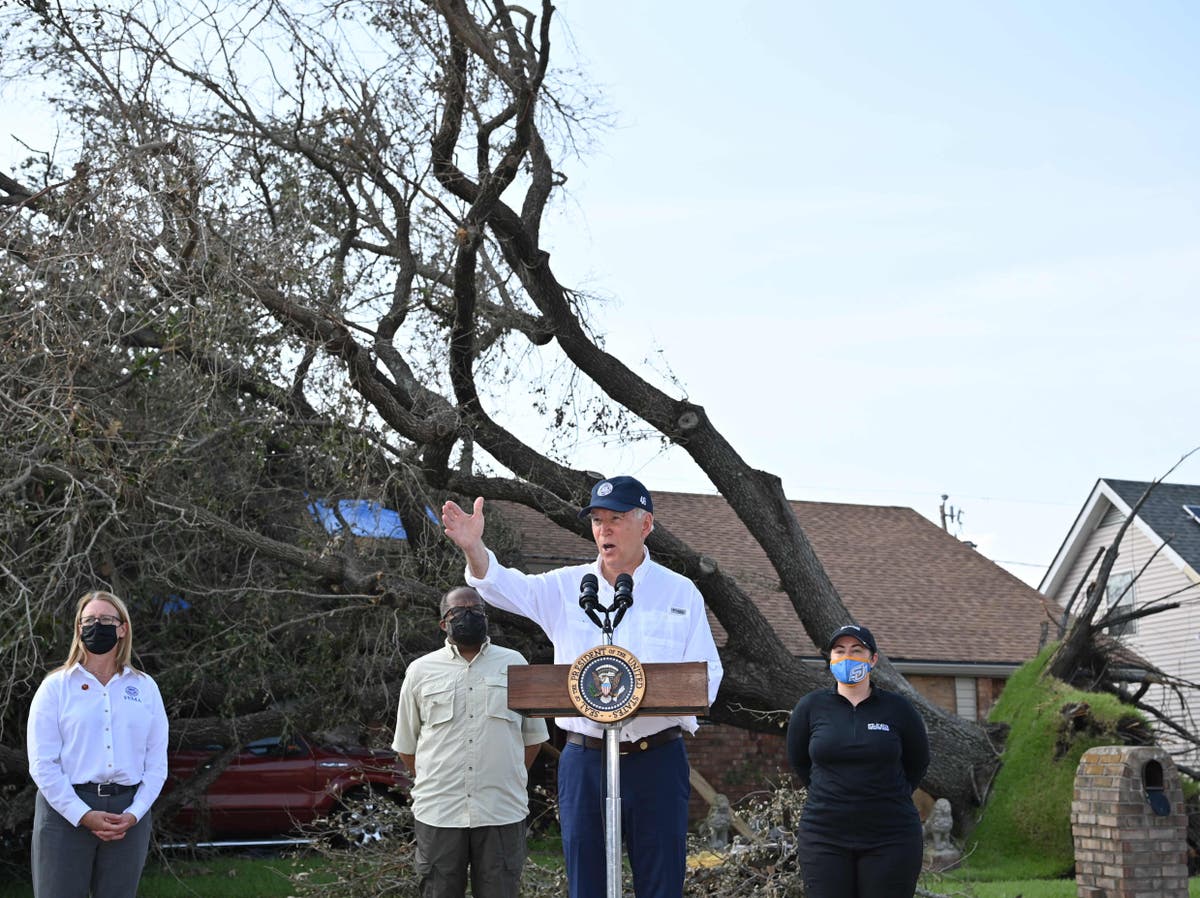 President Joe Biden returned to a familiar role as comforter-in-chief on Friday as he visited Louisiana to witness the damage wreaked by Hurricane Ida.

The category four storm made landfall on Sunday close to New Orleans with winds of up to 150mph and several feet of storm surge.

The hurricane then made a slow march north and its remnants struck New York, New Jersey, Pennsylvania, Maryland and Connecticut on Wednesday, with ferocious force which led to devastating flooding and tornadoes.

Densely-populated metropolitan areas were swamped with rainfall, in some places with as much precipitation as in a typical month. Decades-old city drainage systems failed under the deluge.

By Friday, police were making door-to-door searches with lists of the missing. In New York City, the NYPD was reviewing 911 calls which peaked at 12 times the usual number when the storm hit.

NYPD chief Rodney Harrison said the exact number of New Yorkers missing is unknown but officers would work to make sure everyone was accounted for.

A huge clean-up is underway as abandoned vehicles were towed and water pumped from submerged highways and public transit systems. Residents hauled the ruined contents of their homes onto streets and business owners got to work clearing muck and debris.

At least 49 people have been killed. Four nursing home patients died in Independence, Louisiana, with the state Department of Health confirming that three of the deaths were storm-related.

Some 15 people died in New York City, the majority after being trapped in submerged basement apartments.

In Woodside, Queens, one neighbour heard a family calling for help from their apartment as a deluge of water flooded the building. No one could reach them through the torrent. All three of them died, including a two-year-old boy.

It was a similar story in Cypress Hill, Brooklyn. Roberto Bravo, 66, tried desperately to escape as the water poured through the windows, but no one could reach him in time.

Basement apartments are relatively cheap in a city with sky-high rents and, at times, not up to building codes. The death toll served as another brutal reminder that the climate crisis will affect poor and disenfranchised communities disproportionately.

In New Jersey, at least 25 people died, with many drowning in cars that were caught in fast-moving floodwaters. A 70-year-old man died when his vehicle was swept away by flood waters in Passaic after firefighters in scuba gear managed to pull his wife and son to safety.

A police officer was swept to his death by floodwaters in Connecticut. Four others have been reported dead in Pennsylvania.

“Hurricane Ida didn’t care if you were a Democrat or Republican, rural or urban. This destruction is everywhere. And it’s a matter of life and death, and we’re all in this together,” President Biden said.

The president travelled to St John the Baptist Parish on Friday to meet with local officials and get a closer look at damage from Ida in one of the hardest-hit areas of Louisiana.

He was joined by White House advisor Cedric Richmond, a former Louisiana congressman, as well as governor John Bel Edwards.

“This was a tremendously devastating storm,” the governor told the president. He asked that the White House commit to the “long haul” of recovery efforts.

Governors from affected states underlined the role that the climate crisis has played in exacerbating the extreme event.

“What I’ve seen in my last seven years are these localised storms, storms that actually in some cases occur outside of flood plains and that cause a lot of damage,” Pennsylvania governor Tom Wolf told CNN on Friday. “You know, it’s climate change.”

“One thing I want to make clear: we’re not treating this as if it’s not going to happen again for 500 years,” she said.

Mr Murphy tweeted: “As we continue to contend with the reality of climate change, it is no surprise that storms like Ida are happening with greater frequency and intensity.

“The unfortunate reality is that sudden and intense rainfall is exactly one of the circumstances that New Jersey’s climate scientists have predicted.”

The climate crisis is creating conditions which are driving more powerful storms like Ida.

While it’s still unclear whether the climate crisis will mean more hurricanes, scientists have long warned that increased global heating will probably make the storms we do experience more destructive.

The ocean absorbs over 90 per cent of excess heat caused by greenhouse gas emissions – largely caused from the burning of fossil fuels – and that warm water feeds into hurricanes.

“There is more energy available, so intensification of these hurricanes is expected,” Dr Susan Lozier, president of the American Geophysical Union and an expert on the interaction of oceans, hurricanes and climate change, told The Independent earlier this week. “And intensification brings more winds.”

When Ida made landfall in Louisiana on Sunday, more than a million people lost power after winds of up to 150mph toppled thousands of transmission lines and knocked 216 substations offline.

Thousands of residents are expected to remain in the dark and without air conditioning or running water for at least another week amid stifling heat and humidity.

Another cause for concern is that as the planet heats up, more moisture is held in the atmosphere, meaning storms hold the potential for a lot more rainfall.

“Within about 150km of the storm centre, we expect average rain flux rate to increase about 7 per cent for every one degree Celsius of global warming,” Dr Tom Knutson, senior scientist with the National Oceanic and Atmospheric Administration geophysical fluid dynamics laboratory, told The Independent.

Global sea level rise is compounding the danger of storm surge. The sea level off New York’s coast is up to nine inches higher than it was in 1950.

Following Superstorm Sandy nearly a decade ago, New Jersey and New York have spent billions of dollars improving flood defences. However, much has focused on protecting communities from coastal surge – not rainfall.

“We have to change what we do across the board,” the mayor said. “We need to change our entire mindset, because we’re being dealt a very different hand of cards now.”

Ida is the fifth strongest hurricane to make landfall and the deadliest in the US in four years – and in some areas, the danger had not yet passed. Part of the swollen Passaic River in New Jersey wasn’t expected to crest until Friday night.

And the Atlantic hurricane season is far from over. Hurricane Larry is gathering strength offshore and looks set to build to a powerful Category 4 storm by Sunday with winds of up to 140 mph.

The National Hurricane Center is forecasting that swells from the hurricane will reach the Lesser Antilles islands in the Caribbean this weekend.

Glacier melt is now so rapid, it’s causing the Earth’s crust to move

DeFi Innovates At A Blistering Pace As Regulators Take Action

These Symptoms Indicate You Have Vitamin D Deficiency. Read Remedies Too