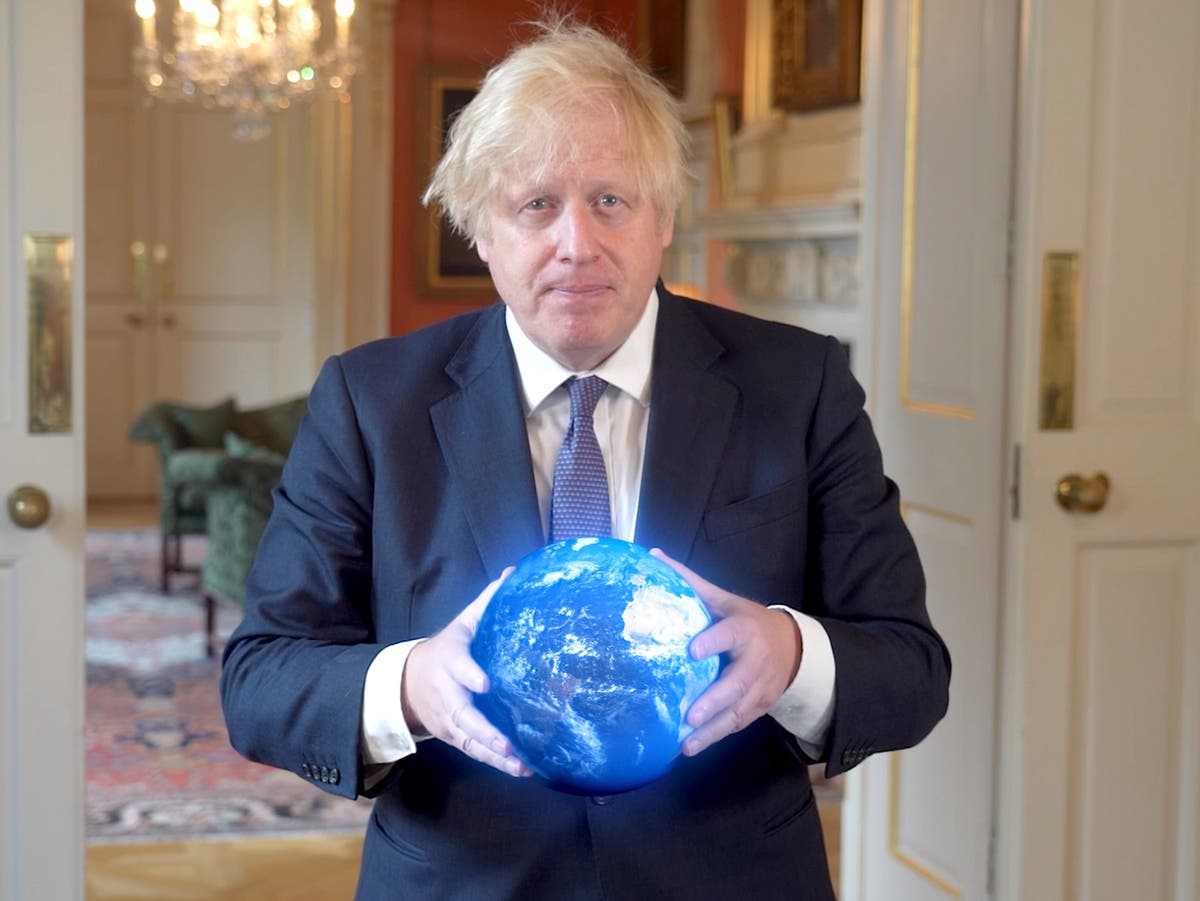 Boris Johnson has admitted it is “touch and go” whether Cop26 will be a success and that he is “very worried”.

The prime minister, answering questions from schoolchildren in Downing Street, said: “We need as many people as possible to go to net zero so that they are not producing too much carbon dioxide by the middle of the century.

“Now, I think it can be done. It’s going to be very, very tough, this summit. And I’m very worried, because it might go wrong and we might not get the agreements that we need. It’s touch and go.”

His comments echoed those of Cop26 president Alok Sharma who earlier warned securing a global climate deal in Glasgow will be “really tough”.

He said sealing any agreement to reduce emissions would be harder “on lots of levels” than signing the Paris Agreement of 2015.

World leaders will begin gathering on Sunday in Glasgow for Cop26.

Hopes for a breakthrough on tackling the climate crisis at Cop26 are fading after Boris Johnson admitted he is “very worried” the summit will fail and it was revealed poor nations will not receive the $100bn of help they were promised until 2023 – three years late.

“It will be very, very tough, this summit, and I’m very worried because it might go wrong and we might not get the agreements that we need,” the PM admitted to children in a Downing Street presser – while insisting it “can be done”.

Opinion: ‘Some world leaders may not attend Cop26 – but that’s ok’

David Callaway, the founder of Callaway Climate Insights, writes about some of the world’s most powerful leaders not attending Cop26.

November in Glasgow was never going to be fun. But even the most callous pessimists didn’t predict the scale of gloom descending on the Scottish city as 20,000 government and business leaders arrive for the UN’s global climate summit next week.

Growing energy crises in Europe, China and India ahead of winter; leaders from major polluters such as China, Russia, Brazil, and Mexico boycotting; scientists warning of environmental devastation without urgent action; and President Biden’s signature climate legislation in tatters. Covid. All set the stage for what could be a major disappointment in a year that was supposed to mark the world’s collective turn toward a green energy revolution.

But looking past the drama of Boris Johnson’s big chance to set post-Brexit Britain’s place at the international table, investors see progress about to move decisively in the form of coordinated financial regulation to prevent the climate crisis from causing another global financial crisis.

Watch: PM admits to doubts about success of Cop26

National plans by countries to tackle the climate crisis leave the world on track for temperature rises of 2.7C, the UN has warned.

A report by the UN Climate Change body assessed all the national plans that have been put forward by countries to cut emissions over the next decade as part of efforts to meet international targets to curb dangerous warming.

Published in the run up to Cop26, it confirms that countries are nowhere near what the science says the world needs to be to limit rising temperatures to globally-agreed goals.

UN climate chief Patricia Espinosa urged countries to redouble their climate efforts or face a “destabilised world and endless suffering” as a result of the crisis.

Concerns as MPs vote against amendment to stop sewage dumps

The group Surfers Against Sewage have warned that swimmers along the south coast could be at risk from the pollution, highlighting 20 beaches along the Sussex and Hampshire coast line that already have a risk warning in place.

The group are trying to raise awareness of the risks after an amendment to the Environment Bill was rejected in the House of Commons, reports Holly Bancroft.

Vladimir Putin has reportedly expressed his regret at not being able to attend the Cop26 summit in person, telling Boris Johnson in a phone call he was forced to pull out due to the Covid situation in Russia.

The PM is said to have insisted he hoped the Russian president would commit to bringing forward his country’s net-zero commitment to 2050, in line with other nations.

Mr Putin has so far committed to reaching the target by 2060.

China has decided to cut its reliance on fossil fuel to less than 20 per cent by 2060, according to a cabinet document published by the state media.

The new target, reported by the state-run Xinhua news agency on Sunday, comes just a week before UN climate talks are set to begin in Glasgow, where countries will discuss climate action goals.

The document lays out a host of guidelines the country will undertake to reduce its dependence on coal.

Stuti Mishra has the full details:

Boris Johnson joked that feeding people to animals could help solve the biodiversity crisis facing the planet during a climate press conference with children.

My colleague Tom Batchelor has more on this story:

Levels of planet-warming greenhouse gases recorded in the earth’s atmosphere reached record levels last year despite lockdowns in countries around the world, according to UN scientists.

Researchers at the World Meteorological Organization (WMO) said concentrations of carbon dioxide, methane and nitrous oxide rose by more than the annual average in the past 10 years.

Bacteria may be key to sustainably extracting earth elements for tech

Hand washing and sanitizing not enough: Close that toilet lid after flushing!

How are extreme weather events predicted?