There’s always one know-it-all on a winery tour. The woman in question sips from her glass of fresh-from-the-barrel red, then holds it up to the light. ‘It’s very purple,’ she announces. ‘I’m getting notes of eucalyptus and green hay.’ Then she points to the wine-coloured stain on the wooden slats of the barrel we’re sampling. ‘Is that a sign of oxidation?’ she asks.

‘No,’ replies vineyard owner Fred Pizzini, not missing a beat. ‘That would be a sign the barrel leaks.’

Fred is the second generation of Pizzinis here in King Valley, home of Australian prosecco, an agricultural and winemaking region in the state of Victoria, about three hours’ drive from Melbourne. As he draws a sample from another barrel, Fred describes how his parents moved here from Italy in the 1950s. Today, Pizzini wines are poured in some of Australia’s best restaurants, well known for Italian varietals such as Nebbiolo and Sangiovese.

Fizzing: A view of Chrismont winery and the luscious King Valley vineyards, part of the Prosecco Road tasting trail

But it’s Pizzini’s sparkling wines that are of most interest because it’s prosecco that has put King Valley on the map. Indeed, such is the quality of Italian-style fizz made here that businesses have banded together to create the King Valley Prosecco Road. Linking a dozen wineries from Chrismont at the top of the valley down to Sam Miranda in the lowlands, the Prosecco Road is a tasting trail that celebrates local food and wine.

We delve deeper into the valley’s Italian heritage after the winery tour at A Tavola!, the cookery school run by Fred’s wife, Katrina. Gathered round a kitchen workstation, we prepare potato gnocchi and make a pepperonata to a recipe handed down from Nonna Rosetta, Fred’s mum.

After that, we savour our creations, accompanied by a glass or two of Pizzini’s finest bubbly. In true Italian fashion, it turns into a long, lazy lunch, which Fred explains is standard practice when visiting Pizzini Wines (pizzini.com.au). ‘People come here expecting to spend ten minutes sampling wines, but end up staying for hours,’ he says, topping up our glasses. ‘We chat, share stories and enjoy the valley.’ 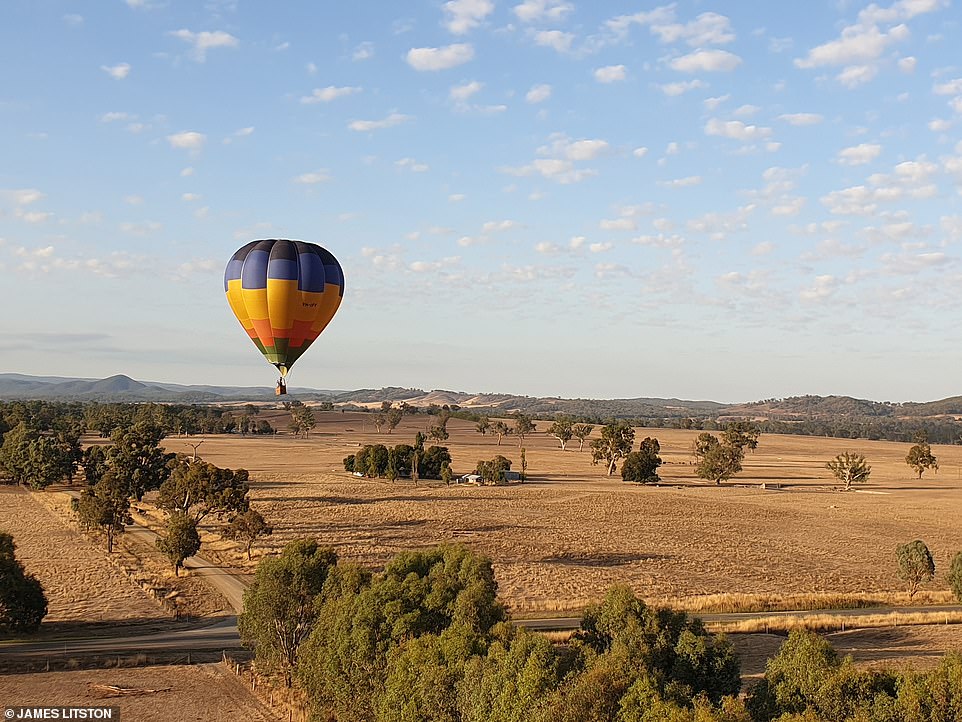 Having a blast: A hot-air balloon over the Brown Brothers winery, one of the vineyards on the Prosecco Road 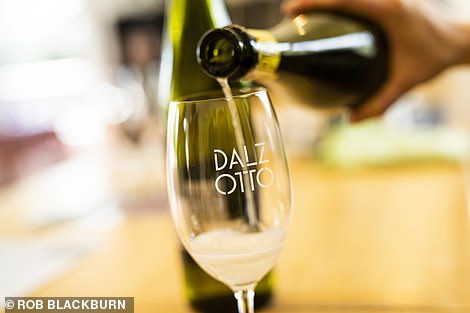 A glass of Dal Zotto, which became the pioneer of Australian bubbly after its first release in 2004

It’s this authentic, unpretentious hospitality that sets a trip to King Valley apart. I’ve visited wineries all over Australia, and while each one has its own charm, they’re often commercial operations with less personality. But here on the Prosecco Road, each winery is a family-run affair, which means guests are greeted with passion.

My immersion into King Valley Prosecco began the previous morning at Dal Zotto Wines (dalzotto.com.au), a couple of miles up the road from Pizzini. With the launch of its first release in 2004, Dal Zotto became the pioneer of Australian bubbly, which made it the obvious place to start a pilgrimage.

I had been expecting a restorative coffee but chief winemaker Michael Dal Zotto had other ideas. ‘Nonsense,’ he’d said, cracking open a bottle of his 2019 vintage at his homely trattoria. Noting the fizz’s fresh, floral characters (the signatures of quality Prosecco), Michael explained how his family had brought Italian-style sparkling wine to the valley. 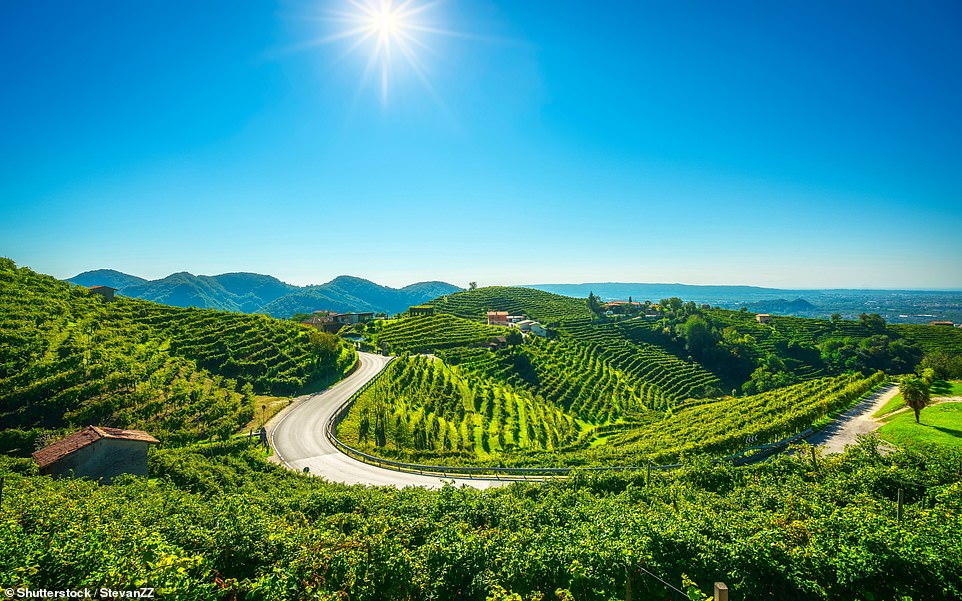 Winemaker Michael Dal Zotto tells James that his father is from Valdobbiadene (pictured), right in the heart of Italy’s Prosecco region

‘My dad’s from Valdobbiadene, right in the heart of Italy’s Prosecco region,’ he revealed. ‘Its soils and climate are similar to here, so he saw King Valley’s potential for growing the wines he knew from back home.’ The success of that first release saw them forced to limit sales to three bottles per person and encouraged them to increase production and get their neighbours into the game.

King Valley is also a wonderful place to spend a weekend. Being that much further beyond Melbourne’s more accessible vineyards, it’s far less crowded than the better-known Yarra Valley or Mornington Peninsula, which means it retains a tangible sense of peace.

Each Prosecco Road winery is unique

As we worked our way through the bottle he had opened, Michael shared his own views on what makes King Valley so special. ‘Each Prosecco Road winery is unique,’ he said, ‘but what bands us together is that we all have a personal story to tell. Our lifestyle here is about the simple things done well, so at Dal Zotto we encourage guests to take their time and stay as long as they please: have lunch, play bocce on the lawn or take a nap under a tree. It’s amazing how quickly visitors embrace our gentler rhythm.’

True to form, our wine-tasting turns into a hearty lunch of wood-fired pizza topped with pumpkin and figs, accompanied by a salad of tomatoes still warm from the sun that ripened them. After lunch, Michael walks me through the plots that produced most of the ingredients we’d just eaten, with everything grown under netting to protect it from cockatoos. ‘The secret to our appeal is that we’re uncomplicated. Life’s simplest things are so often the most enjoyable,’ he says. 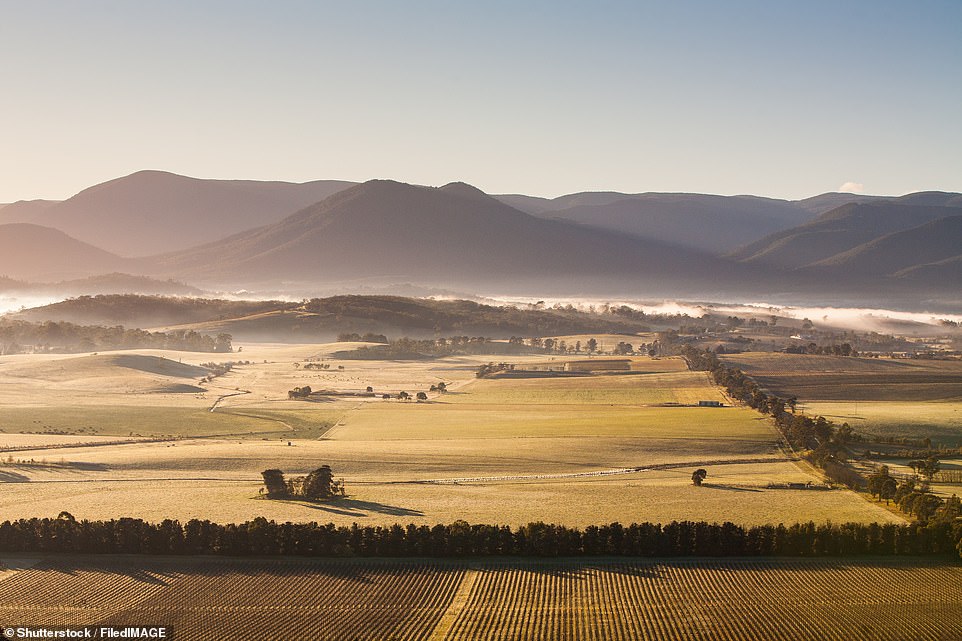 Dal Zotto hosts yoga among the vines and offers rental bikes for gentle exploring. If you’re keen to burn off the gnocchi, take out one of Michael’s mountain bikes. Setting off along quiet country roads, you’ll pedal past acres of vines dotted with paddock-to-plate restaurants and cellar door tasting rooms, each one worthy of a visit.

After a while, I pull into a picnic spot to dip my toes in the cool King River. There’s nobody here except me and the wildlife. A kookaburra cackles from somewhere.

The next stop is Lancemore Milawa (lancemore.com.au), a boutique hotel surrounded by the vines of Brown Brothers winery. I take a bottle outside and make myself comfortable under a tree. I pop the cork, settle back and raise a toast to Michael Dal Zotto. After all, he’d given me the sagest advice for a potter down Prosecco Road. ‘No matter how you choose to enjoy your time here in the valley,’ he’d said, ‘don’t do it in a rush.’

Caribbean holiday: Inside the Sandals resort in Grenada

Southwest weighs schedule changes, apologizes to staff after complaints about a grueling summer

Why would an Oscar-winning actor create a travel app? Kevin Costner shares his story

Iceland opens to all travellers, including unvaccinated

Women have served in the armed forces for decades so why is it still a man’s world?

Neuroscientists map major circuit in the mouse brain: Milestone could lead to new treatments for Parkinson’s and Huntington’s disease