By Florence Derrick For Mailonline and Associated Press

The first Sesame Street theme park on the USA’s West Coast is set to open next month, offering a boost to San Diego’s tourism market as it bounces back from the pandemic’s hit to the industry and restrictions are eased.

Sesame Place San Diego is the first theme park in nine years opened by SeaWorld Parks & Entertainment, which has a longstanding relationship with Sesame Workshop, the nonprofit organization behind the popular, educational show, which airs in more than 150 countries.

Sesame Place San Diego (rendering above) will have child-friendly flumes, slides and a lazy river, as well as one of the largest wave pools in Southern California 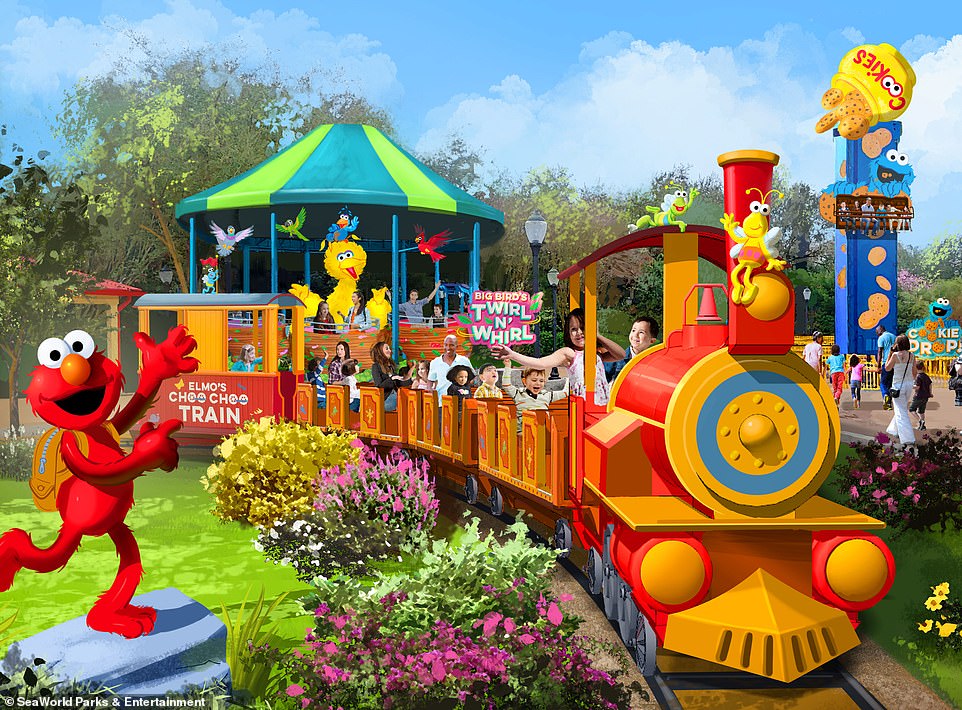 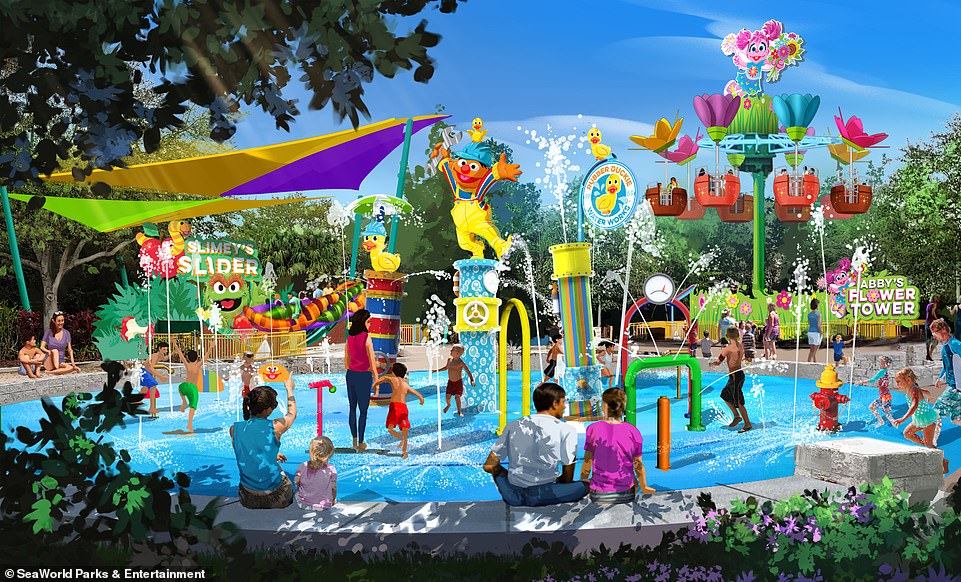 Owned by SeaWorld, Sesame Place San Diego (rendering above) is the company’s latest bid to move away from live animal shows, which drew worldwide criticism over its treatment of whales after the release of 2013 documentary Blackfish

The park is the latest step by Florida-based SeaWorld to move away from live animal shows, which had drawn worldwide criticism over its impact on whales and prompted profits to plunge, especially at its San Diego park. SeaWorld’s Orlando park opened a Sesame Street section in 2019.

And the San Diego park couldn’t be opening at a better time, with people emerging from pandemic boredom and itching for a new experience, said Dennis Speigel – owner of International Theme Park Services Inc, a global consultant on the industry.

‘2021 was an incredible bounce-back year for the theme parks,’ he said. ‘People came back in droves.’

Sesame Street is also seeing a revival in its popularity among families, Speigel said.

Visitors will walk into an interactive Sesame Street Neighborhood, a replica of the one on the TV show with the 123 Stoop. It will include Elmo’s Window where Elmo’s bedroom window comes to life so kids can play, dance and sing with him and his friends.

The park will also have 18 Sesame Street-themed rides. They include Cookie Climb, which leads to the top of Cookie Monster-themed towers; Elmo’s Rockin’ Rockets, which flies on an imaginary trip through outer space; and Super Grover’s Box Car Derby, a kid-friendly roller coaster. It also has a 500,00-gallon wave pool, one of the largest in Southern California. 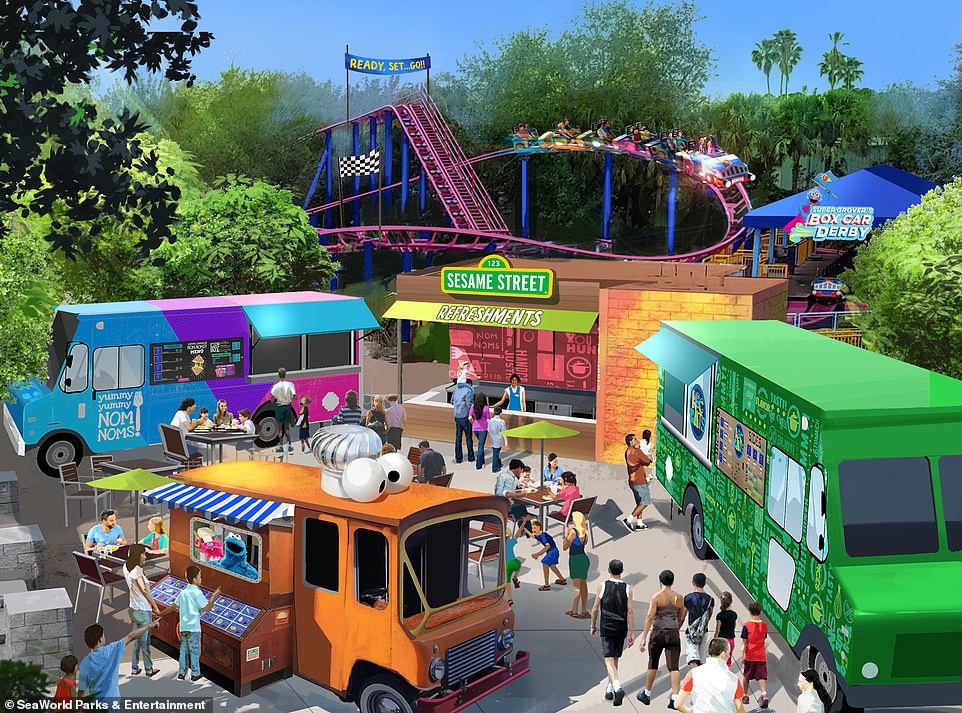 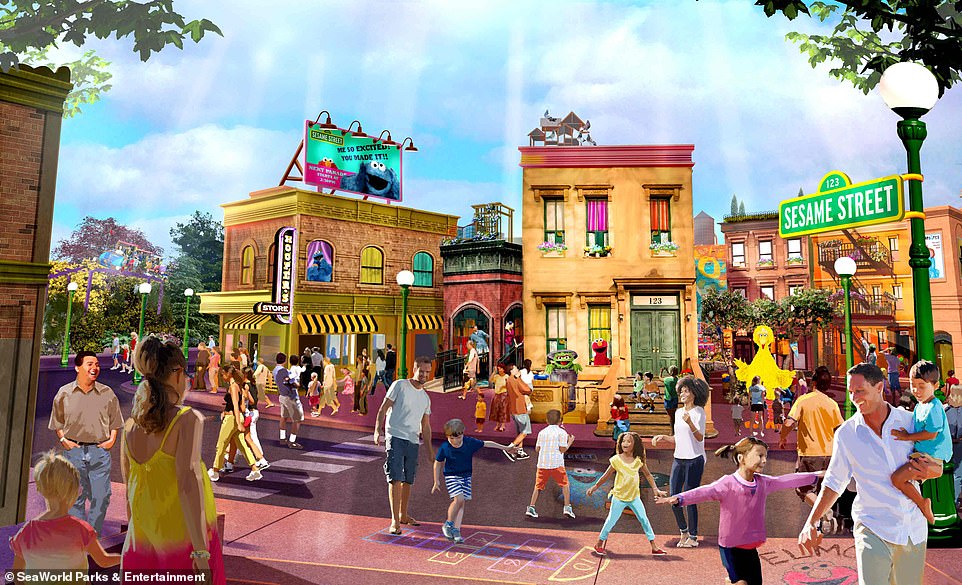 Visitors will walk into an interactive replica of the Sesame Street Neighborhood (rendered above), which will include Elmo’s bedroom window where kids can play, dance and sing with the furry red muppet

Employees will be specially trained to work with children who have autism and other special needs. SeaWorld has been offering specialized services at its parks for visitors with autism in recent years.

SeaWorld announced the end of its breeding program in March 2016, after years of pressure from animal rights advocates and shifting public opinion about orcas being held in captivity.

The protests intensified after the release of the 2013 documentary Blackfish, which focused on the life of Tilikum, a killer whale responsible for killing a trainer when he dragged her into a pool in front of shocked visitors in 2010.

CEO Marc Swanson, who came on in 2020, has been taking steps to build up the company again. He previously worked at the original Sesame Place in Pennsylvania. He said he looks forward to families creating similar ‘life-long memories’ in California.

‘We are thrilled to debut this new park and add a premiere tourist destination to California that is so appealing to families,’ Swanson said in a statement.

What are the COVID entry rules for travelers to European countries?

Are surcharges coming back to travel?

U.S. will deport undocumented migrants regardless of vaccination status, even as border restrictions ease

‘Come back to help out’: Ryanair trolls Rishi Sunak over California trip

Did the pandemic really change holidays in Britain?

More4 TV show goes behind the scenes of ultra-luxury hotels in Italy, Mexico and Morocco

In the doghouse: Welcome to the UK’s most in-demand canine hotel (no human guests allowed)

Should you cancel travel plans because of the coronavirus delta variant?

The BBC’s World Affairs Editor John Simpson talks about his travels to Angola, Colombia and Iran

Opportunity Ahead? A Week Of Negatives Increases Probability Of Stock Market Correction