London… down to a fine art: The best of the capital’s blockbuster exhibitions from Van Gogh at Somerset House to Dali at the Tate Modern (and where to stay nearby)

By Neil Simpson For The Mail On Sunday

Every week, our Holiday Hero Neil Simpson takes an in-depth look at a brilliant holiday topic, doing all the legwork so you don’t have to. This week: Art breaks in London.

Blockbuster art exhibitions are back and, with few overseas visitors around, now’s a good time to take the chance to see them.

Self-Portraits reveals 16 of Vincent Van Gogh’s works from around the world, including several not shown in the same space since they were painted some 135 years ago.

The famous Self-Portrait With Bandaged Ear is a highlight, alongside two portraits painted in a psychiatric hospital in 1889 that give a chilling depiction of Van Gogh’s mental decline. The just-opened exhibition is at the Courtauld Gallery in Somerset House, London, a stroll from Covent Garden. Tickets £16 (courtauld.ac.uk). For a budget stay, choose the Travelodge on Drury Lane, with rooms from £40 a night. For a more glamorous stay opposite the gallery, check in to ME London from £281 per room.

Salvador Dali will be part of the Surrealism Beyond Borders show opening in two weeks at Tate Modern. The artist’s 1938 creation Lobster Telephone will be in pride of place, perhaps the perfect example of surreal juxtapositions. Tickets £18 (tate.org.uk). In the vast gallery, visitors can be immersed in a pair of mirrored rooms full of chandeliers and tiny lights in exhibits by Japanese artist Yayoi Kusama.

Budget stays nearby include Southwark Premier Inn from £47 per room. Rooms at Sea Containers House, where interiors resemble a 1920s cruise liner, are from £230.

The Victoria & Albert Museum’s Fashioning Masculinities: The Art Of Menswear exhibition examines how men’s appearances have changed over the centuries. More than 100 exhibits will include everything from classical sculptures and portraits by English artist Sir Joshua Reynolds to Gucci suits worn by Harry Styles. There are also photographs of Oscar Wilde, Cecil Beaton and The Beatles, and clothes designed by Harris Reed and Jean-Paul Gaultier. Tickets £20 (vam.ac.uk). Stay nearby at the Doubletree by Hilton in Kensington from £114 per room per night. 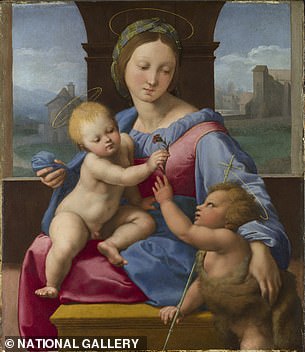 Raphael’s career is examined in an exhibition at the National Gallery. Pictured is the artist’s ‘The Garvagh Madonna’ painting

The Renaissance artist Raphael is celebrated at the National Gallery on Trafalgar Square. Most famous for portraits, Raphael also created sculptures, stage sets, tapestries and prints. His broad but short career – he died at 37 – is examined in an exhibition of about 100 works. Tickets £24 (nationalgallery.org.uk). The chic Page 8 hotel overlooks the National Portrait Gallery, with rooms from £230 per night, or The Trafalgar hotel with a rooftop restaurant costs from £241 a night.

Raw and distorted images of artist Francis Bacon are featured at the Royal Academy until the middle of April. In The Man And Beast exhibition, nearly four dozen works have been brought together. They include his final painting, Study Of A Bull, on display in the UK for the first time. Tickets £22 (royalacademy.org.uk).

Small rooms at Zedwell Piccadilly are from £71 per night. Alternatively, stay in the middle of the action at W Leicester Square from £348 a night.

Beautiful beasts: Why The Rolling Stones and A-list actors are on a mission to save lions

British Airways confirms A380 plans as part of winter expansion

Station known as ‘Titanic of the mountains’ reborn as hotel

Major branches in the tree of language reconstructed