Sunday afternoon at Cala Sa Nau and the two-person band (guitarist and percussionist) are tuning up while the beautiful people hunker down along the narrow sandy beach and on rocks that frame the jagged cove.

But not beautiful in the look-at-my-Instagram sort of way. More of a sangria method of relaxation on the sabbath.

We make our presence felt because we are eight adults and four children under three. I feel sorry for the Spanish couple reading next to where we plant ourselves — just as I felt sorry for those in rows 26 and 29 on the flight from Gatwick (we were in rows 27 and 28).

Secluded: The beach at Cala Sa Nau, where Mark and his family spend a Sunday afternoon during their visit to the ‘refreshingly unglamorous’ south-east of Majorca

But, somehow, the children feel the vibe at Cala Sa Nau and respond admirably. It is the first experience of the seaside for some of them — and the first encounter for me of the quiet and, it must be said, refreshingly unglamorous south-east of Majorca, the largest and most varied of the Balearic islands.

About an hour away is the busy capital, Palma — imperative to visit if only for sight of the magnificent cathedral with its modernist interiors designed by Antoni Gaudi.

But, here in our nearest village, S’Horta, the main activity of the day is waiters laying the tables in the square at the two restaurants serving almost exactly the same food.

It’s towards the end of September (Majorca rightly wants to be known as an all-year destination) and we don’t hear another British voice. Instead, there are lots of Germans and in general they are so surly that we find this strangely uplifting. 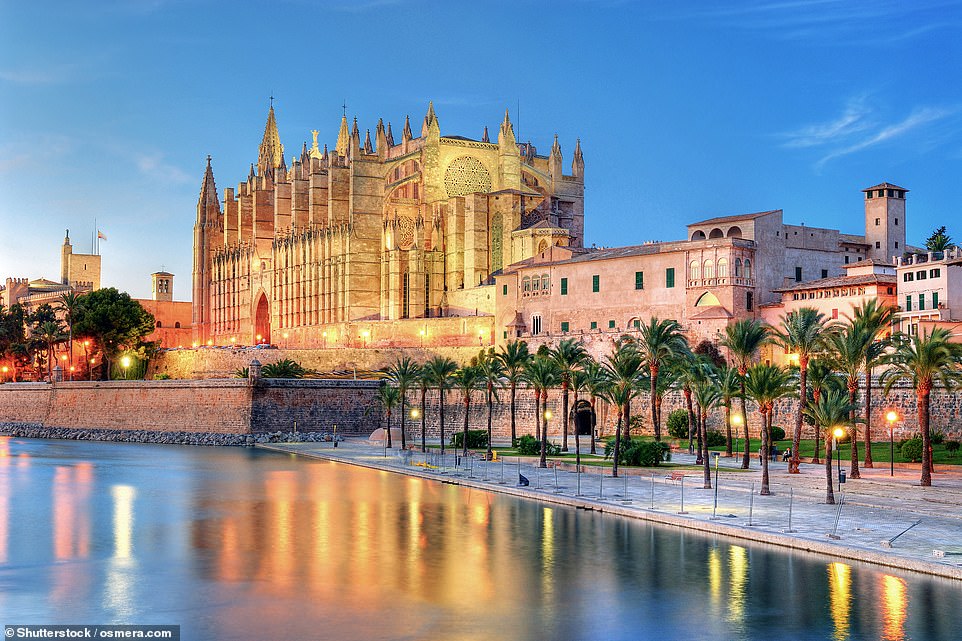 According to Mark, the Majorcan capital of Palma is ‘imperative to visit if only for sight of the magnificent cathedral (pictured centre-left) with its modernist interiors designed by Antoni Gaudi’ 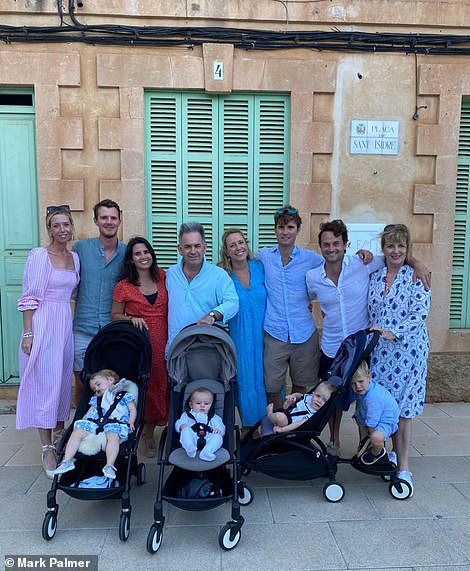 Together: Mark (centre) and his family on holiday

We are staying at a Vintage Travel villa called Sa Marina. It’s not luxurious (one evening we find the charming owner underneath the sink fixing the tap, and the wifi wouldn’t suit anyone attempting to work on holiday) but it sleeps 12 and all rooms have their own bathrooms. Best of all is the outdoor space: large pool, ping-pong table, a swing, attractive lawns, long table on the veranda for meals, doing jigsaw puzzles or arguing over plans for the day. On a map, I count more than 40 coves within as many miles on this stretch of coast.

My idea is to visit as many as possible but soon realise that two of the best are almost on our doorstep: the aforementioned Cala Sa Nau and my undisputed favourite, Cala Mitjana.

You can drive to Cala Sa Nau and park but, as with many coves in the Balearics, Cala Mitjana is reached only by boat or on foot, the latter via a path that becomes narrower and rockier the closer you get, the sea offering tantalising glimpses of itself through pine and Cypress trees.

The beach is tiny but overlooking it, up on the hill, is a huge house belonging to a Frenchman who lives in Milan — or so we are told. We become fascinated by it and press on up a ridge to get a better view. We are rewarded famously, not just of the monsieur’s luxurious lair but of the Mediterranean in rumbustious mood, with Algeria somewhere out there in the distance.

Catering for a group such as ours means almost daily visits to the Eroski supermarket in Cala d’Or.

My wife admires the fruit section, which seems to change every day depending on what’s available, while I’m pleasantly taken with the wine — or, rather, the prices for thoroughly decent bottles of local Rioja. 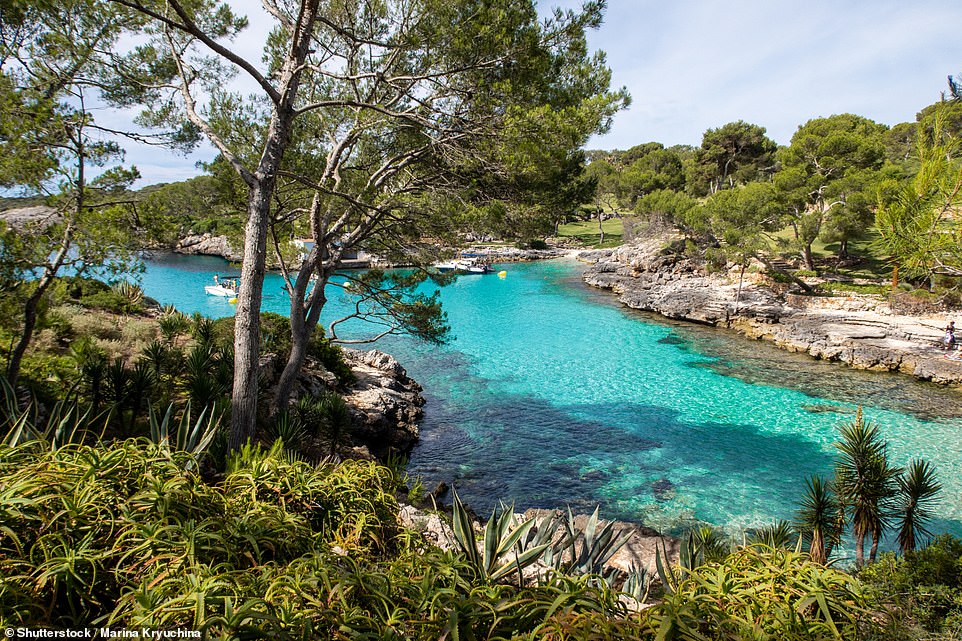 Above is Cala Mitjana, Mark’s ‘undisputed favourite’ of the 40 coves that are nestled along the coast

Seven nights villa only at Villa Sa Marina with Vintage Travel from £1,606 (vintagetravel.co.uk; 01954 261431). London Gatwick to Palma returns from £42 (easyjet.com). Vintage Travel can arrange for Hire A Chef Mallorca (hireachefmallorca.com) or a local family cook to cater for all or part of a stay.

One evening, we push the culinary boat out and invite Sergio Rifugio from Hire A Chef Majorca to provide a slap-up paella dinner with all the trimmings, including tapas starters, chocolate brownie with ice cream dessert and, crucially, a helping hand in the form of Maria, who serves us at the table and does the washing up.

What’s more, Sergio brings along his own huge circular gas burner and cooks the mixed paella in front of us — a base of vegetables, then mussels, prawns, calamari, cuttlefish, pork and chicken, before folding in the rice. I’ve made the mistake of ordering paella in restaurants in the UK. Nothing has ever tasted like this one. We send Sergio and Maria off with rousing applause.

Next morning, the sun comes over all coy, so some of our group, including two toddlers, head inland to the former Sant Salvador monastery dating to 1348.

It was built high on a hill on the orders of King Peter IV of Aragon as a place of pilgrimage when a plague raged across Majorca and many islanders perished. Later, the little chapel could not cope with the huge number of pilgrims visiting and it was replaced in 1715.

With a statue of the Virgin Mary from the 13th century and a high altar from the 15th, it is extraordinarily sumptuous. The toddlers look up at the massive silver candelabras on either side of the altar open-mouthed.

The good old Church of England always hopes to attract the young by trying to be more secular, introducing guitars and such-like — but nothing works better than ratcheting up the mystery.

At our last supper we all agree that we’ve developed a strong affection for our villa and for this lesser-known part of Majorca. We haven’t ventured too far and wide and the littlest ones won’t remember a thing. But their parents — and grandparents — certainly will.

The fascinating history of package holidays in the UK

The most exciting new hotels opening in Europe in 2022

How to spend a day in King’s Cross, North London’s most exciting neighbourhood

Boeing 2021 airplane deliveries surged, led by return of 737 Max, but were still behind Airbus

The rise of personalised stock indices