Portugal’s Route 66: Climbing aboard a Triumph for a road trip from Spain’s border to the Algarve

They call it the Route 66 of Portugal. And, like the iconic US highway, this road defines a nation. The Estrada Nacional 2, or N2 to its friends, was once a 450-mile-long backbone of the Portuguese road system. From a sleepy spa town called Chaves, near the northern border with Spain, to Faro on the Algarve, it was built in 1945 to carry goods and people the length of the country.

The N2 is now almost deserted except for local traffic, and therefore perfect for a leisurely road trip on two wheels (or four) through the byways of old Portugal. This is among the most scenic stretches of tarmac, cobble stones and gravel in the world.

My travelling companion is Tim. We’ve known each other since schooldays and share a lifetime of memories, as well as a love affair with motorcycles. Tim is riding his favourite 2002 Yamaha Bulldog, the big V-twin engine roaring lustily as we power up through the bends past centuries-old terraces of vines and olives.

The Mail on Sunday’s John Wellington travelled along the often-deserted N2 road. He says it’s ‘perfect’ for a leisurely road trip on two wheels

I’m on my 2017 Triumph Bonneville. I like the modern refinements such as heated grips, cruise control and ABS brakes – which save my skin once on the trip when a farmer’s tractor crosses my path just as I accelerate to overtake.

We’d read about the route on biker forums and excellent blogs such as juliedawnfox.com. The tourist board (visitportugal.com) gives great guidance and you can even have a ‘passport’ stamped at offices en route to document your journey.

We packed gear for wild camping and decided to stay at cheap hotels as well as posh ones, so you can make the budget as flexible as you like. 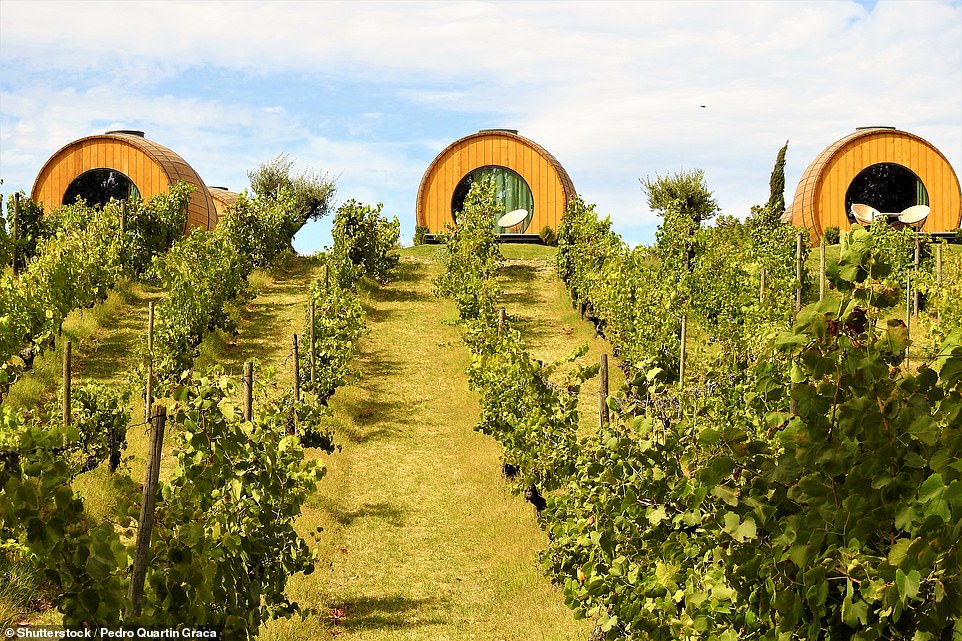 Drinking in the view: John visited Quinta Pacheca vineyard, where guests can sleep in suites built like giant wine barrels 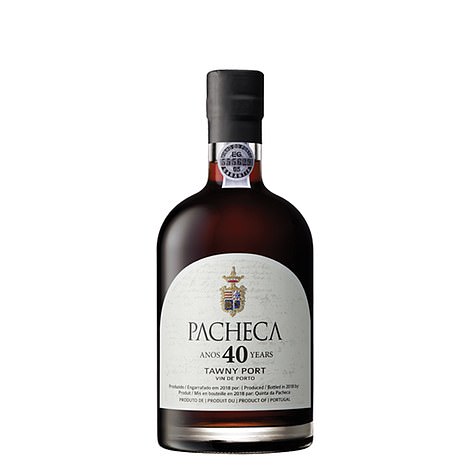 It’s still warm at the start of October when we make our trip, and a million shiny fragments in the road surface catch the sun and glisten like tiny stars. On the road, our bikes go well together and there are few greater pleasures than riding to adventure on a sunny day with your mate alongside. A dog rushes out from a farm barking while, above, a hawk wheels in search of prey. We pass roadside shrines and vineyards with leaves turning purple as the grapes ripen.

We rumble through villages with cobbled streets and whitewashed houses alternated in brilliant blue. Roadside stalls offer melons and strings of fat shallots. There are scents of eucalyptus trees and pine in the plantations higher up where the road winds up into the mountains.

Grinning bikers speed by on the curves in the opposite direction and we flash a salute of comradeship in two-wheeled paradise.

Pigs rootle in olive groves beside roads lined with cork trees, their bark stripped and the trunks marked with numbers indicating the next harvest time. We stop at a roadside van with plastic tables in a layby for salty grilled chicken, fresh lemonade and a tomato salad, pungent with hunks of sweet onion, chopped parsley and olive oil. Lunch for two? Just £10.

Back on the bikes, we continue past cottages smothered in purple and crimson bougainvillea. The road is lined with pink and white oleanders.

One of our first overnight stops is at the spectacular Vidago Palace (vidagopalace.com), a red-stoned monster of a place built at the height of the pre-First World War Belle Epoque when the European elite would come to indulge themselves while taking the health-giving spa waters.

The building is so imposing it was used as the location for a Portuguese version of Downton Abbey. The grand interiors have been carefully restored and we sip martinis on the terrace in our leathers, alongside American tourists revelling in the old-style glamour. Here B&B is from £215 per room per night or £818 for the Grand Suite. The rooms are traditionally luxurious and it’s the kind of place you feel the need to dress for dinner in the Grand Ballroom. Luckily there’s a bistro for those of us in biker boots.

Back on the road, Tim and I enjoy the blokey non-verbal companionship that comes with 50 years of friendship. Occasionally one of us will take off with a squirt of speed through the bends but mostly we bimble along enjoying the sights and scents we pass. Sometimes lorries and speeding cars pass overhead on the modern highways that have replaced the N2, on valley-spanning viaducts unimagined by British roadbuilders.

The N2 crosses the great Douro river at Peso Da Regua. The big river cruise boats are moored up, their passengers ashore on tours of the world’s oldest demarcated wine region. We join them in terraced vineyards, the source of lush grapes since Roman times. An avenue of plane trees shades the approach to the nearby Quinta Pacheca, a vineyard established in 1738 which also offers a luxurious hotel where you can sleep in suites built like giant wine barrels (quintadapacheca.com). Expect to pay from £182 for a standard room per night, or £291 for a barrel suite. 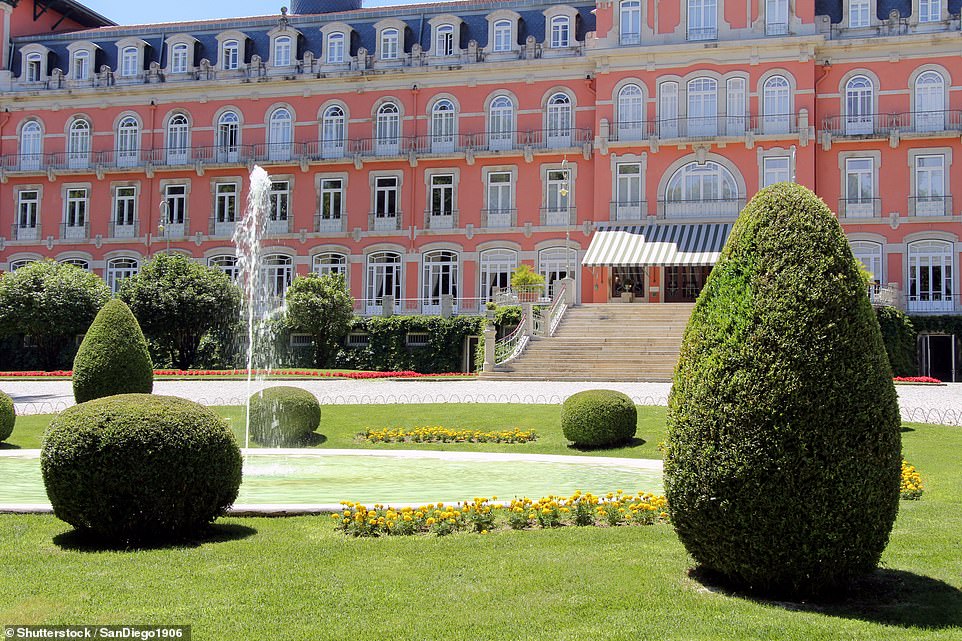 Spectacular: John stayed at Vidago Palace (pictured), a ‘red-stoned monster of a place’ that was used as the location for a Portuguese version of Downton Abbey

Our guide is Ricardo, a handsome young man descended from generations of wine-makers. He tells how his grandfather would taste the grapes to decide when to harvest. The Quinta Pacheca’s annual 600,000 litres of wine are now made with laboratory analysis of soil and fruit. But the grapes are still picked by sweating labourers now lying exhausted by their work in the early afternoon.

Later we are shown the vast stone troughs where the fruit is still squashed by human feet.

There are some 85 varieties of grape in the Douro, including Touriga Nacional, Touriga Franca and Tinta Roriz. Some of the vines are more than 100 years old, their roots going deep for moisture. Appellation rules prevent additional watering.

The region also produces port wines, named after the city at the river’s mouth from where enterprising merchants shipped to Britain. The drink was created by accident, says Ricardo, as the shippers added raw alcohol to the casks to help preserve the wines. British drinkers since Samuel Pepys have been enjoying the extra kick to this day. 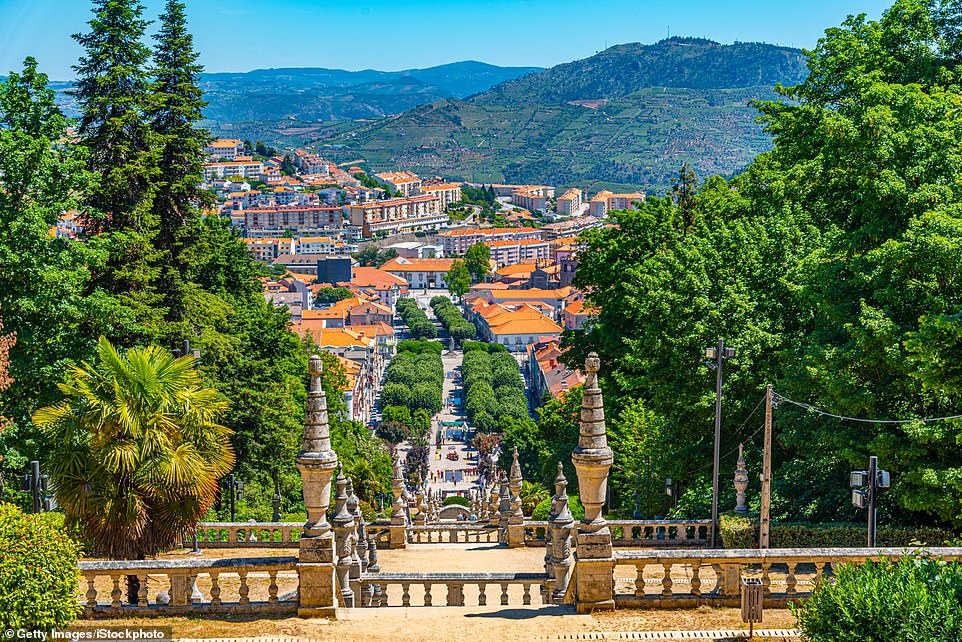 Wine country: Pictured are the vineyard valleys around the town of Lamego, which was one of John’s stop-offs 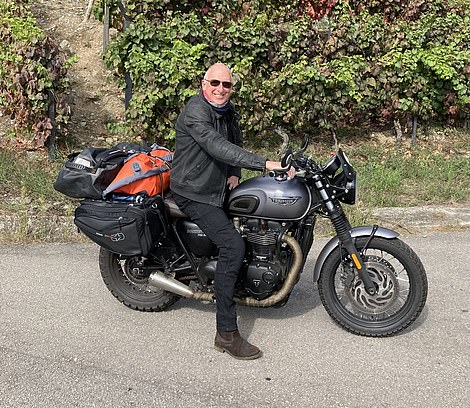 Highway to heaven: John on his bike

Ricardo offers a tasting of the quinta’s 40-year-old tawny port, a glorious mouthful of caramel, honey and ripe fruit flavours that justifies the £117-a-bottle price tag.

He has business to attend to and, carelessly, leaves half a bottle on our table so the rest of the afternoon slips by in a sunny, porty heaven as we sip and savour the scents and sights in the old garden.

Bikes are abandoned for the day and we take a taxi back to our hotel.

Heading south again, we stop off at the Lamego Hotel and Life (lamegohotel.pt/en/). From the outside it’s an ugly concrete box, but it has a gracefully designed interior offering views of terraced vines and is staffed by good-looking young people eager to please in uniforms of crisp white shirts and blue jeans. B&B is from £112 per room per night.

The N2 finishes for us in Faro and there, in the heart of the old town, we stay at the curiously named but fabulous 3HB (3hb.com), a brand-new hotel cunningly constructed behind the facade of an old cinema. A trendy designer named Paolo Lobo has produced an elegant modern palace of luxurious teak with lots of slate-grey and white colours.

The rooftop pool alone is worth the visit – it’s a glittering glass-sided infinity pool, with a view across Faro’s rooftops and the sea, where you can drop your white bathrobe and take a plunge before breakfasting on poached eggs with hollandaise sauce and smoked salmon at the tables alongside. B&B from £168 per room per night.

If you fancy some culture as you go along the N2, make sure you visit the museum at Peso Da Regua, which documents the history of wine and port. Lamego has a cathedral and an amazing baroque hilltop shrine where pilgrims mount its 686 steps. Enjoy a great collection of Portuguese art treasures at the Grão Vasco Museum at Viseu. See the castle at Abrantes; learn about cork at the Cork Oak Observatory at Coruche. Discover black pottery making at Vila Real. Bathe on the river beaches at Canaveias or Gois and, close to the N2, check out romantic Almourol castle on the river Tagus.

We take about five days to get to Faro but you can do it quicker… or slower. We started in the north because we took our bikes on the efficient and comfortable 30-hour Brittany Ferries crossing from Portsmouth to Santander (about £1,124 return for two bikes and a cabin, including breakfast and dinner). 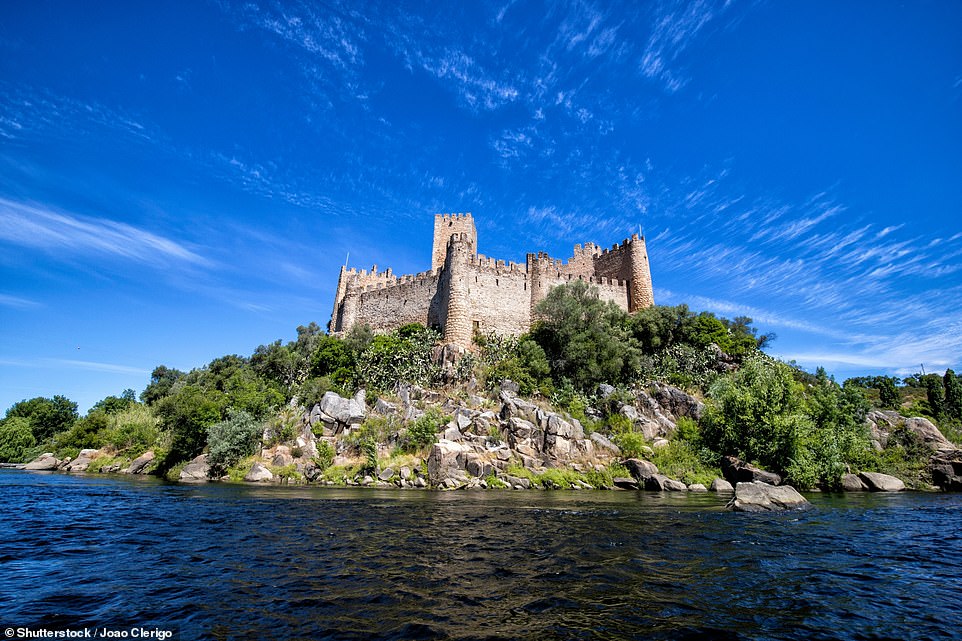 Romantic: John recommends checking out Almourol castle (pictured) on the river Tagus, which is close to the N2

Alternatively, fly to Faro, then rent a car or motorbike. The enthusiasts at Soulful Bikes (soulfulbikes.com) will plan a route, suggest accommodation and even accompany you for a day or so on their extensive fleet of motorcycles, scooters, bicycles and e-bikes. You can hire a Honda 125 for £55 a day or spend £210 for a Harley Glide. Helmets and luggage panniers are included.

If you are a biker in Faro, you must pay homage at the Faro Moto Club – a Euro-bikers’ clubhouse famous for its burgers, heavy metal imagery, motorbike regalia and sculptures of motorbikes. Heavy rock blasts from the sound system – the place is like the set of TV show Sons Of Anarchy, but without the violence.

We are welcomed by the club president, bizarrely named Victor Hugo, every inch the biker chief, in beard and cut-off denim jacket. We meet a lady holidaying on a big blue Harley-Davidson, a grizzled old Irish biker now resident on the Algarve and a chap touring on an elderly Royal Enfield with a plastic bottle of engine oil taped to the frame for topping up. Biker heaven.

Chaves to Faro might lack the glamour of the original Route 66 from Chicago to Los Angeles, but for a sweet European road trip it’s unbeatable.

Vaccination vacations: how being jabbed will ease travel restrictions for millions

Where to eat, drink, shop and stay in Cluj, Romania’s buzzy student city

What are the latest travel rules for France this half-term?

Barcelona has high hopes for the return of mass tourism