Families say they are having to cancel their holidays due to a waiting time of up to ten-weeks for a new passport.

The Passport Office has issued a warning saying people should allow up to two-and-a-half months to renew their papers. Previously it had been just three weeks.

They are concerned because only four of an expected seven million applied last year for them.

But Home Office officials  are adamant there is not a backlog and the processing time has not been affected by civil servants still working from home. They were insistent last night there were no problems and everything was working perfectly.

It will be news to mother Claire Mochar whose son has still not received his new paperwork after applying back on July 16.

She said she had been forced to cancel their holiday, adding: ‘Such a shambles. We have had to cancel our holiday as we were due to fly.

‘It hasn’t even been processed or approved yet. I renewed mine in December and only waited 10 days.’

A Twitter user said they too had been suffering problems trying to get an emergency appointment.

He added: ‘I haven’t been able to get an appointment for weeks, and my flight is on 18th August.

‘At this rate I’m going to ruin my kids’ summer holidays.’

It comes as the majority of civil servants continue to work from home during the pandemic, although the Home Office insisted remote working did not slow down any processes.

Texts have been sent by mobile phone out to those whose documents are nearing expiry.

It reads:  ‘Reminder: It takes up to ten weeks to get a new passport. Don’t leave it too late, renew now.’

And the website for the identifying travel papers urges people to avoid delaying getting them re-ordered.

Director General of Her Majesty’s Passport Office, Abi Tierney, said: ‘It is vital those who may need to apply for a new passport do so now.

‘If you have delayed renewing your passport or are applying for the first time, please apply now so you can receive it in good time.

‘Our dedicated staff work tirelessly to ensure that passport applications are processed as quickly as possible.

‘This new advice will help to ensure that we continue to meet the travel plans of our customers during any period of the very highest passport demand.’

The passport office says it usually has an excess of seven million people apply for renewal.

But it says the pandemic has seen a ‘significant drop’ from applicants. 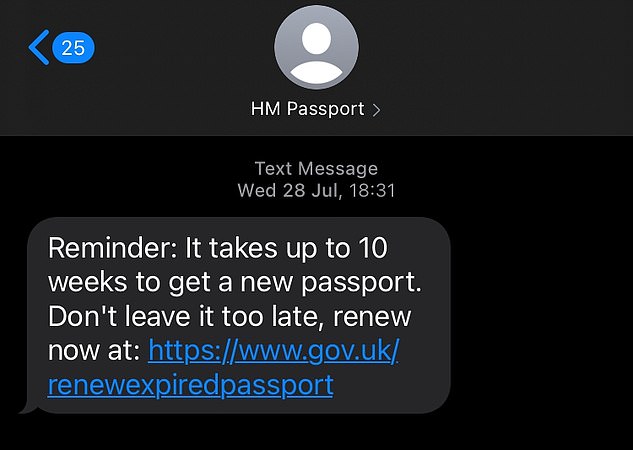 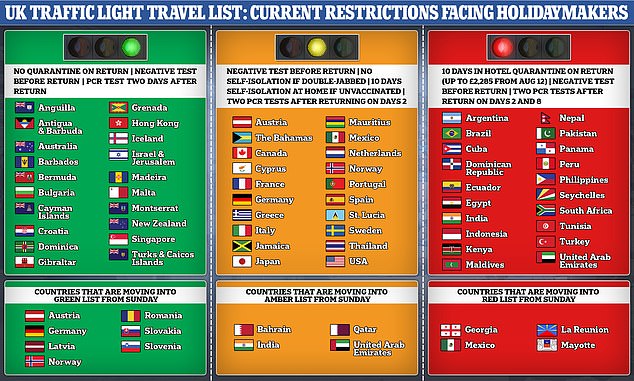 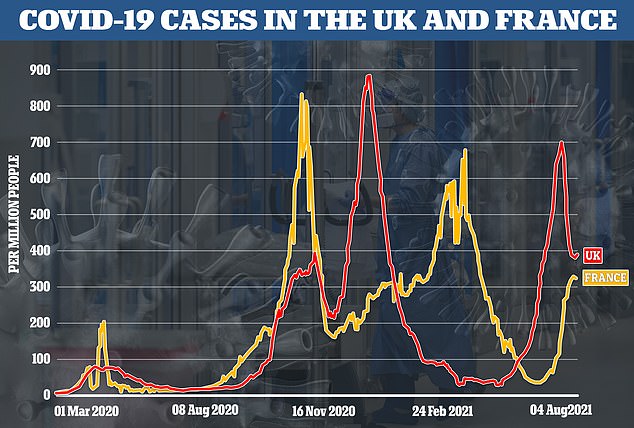 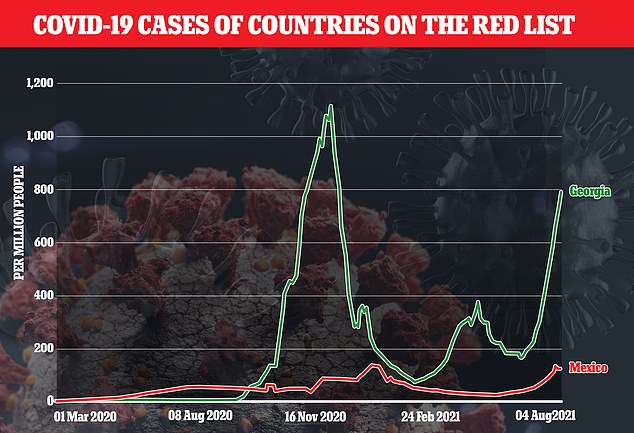 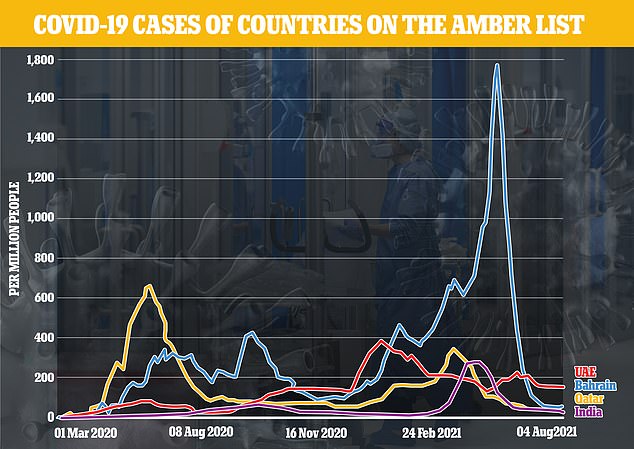 Grant Shapps: I can’t rule out Spain turning red – but denies keeping it amber is because of a lack of space in quarantine hotels

The Transport Secretary Grant Shapps said he ‘can never say there is a zero chance’ travellers from Spain and other popular holiday destinations will not have to quarantine again in future.

Grant Shapps was asked by Sky News whether Spain could return to the red list for travel destinations in future.

He replied: ‘With coronavirus you can never say there is zero chance.

‘But having said that, the levels of vaccination and what we now know about the virus and what our scientists have been able to work out in the last year means that people should be able to go away, enjoy their holidays without looking over their shoulders the whole time and as I say, the next set of changes are not for another three weeks.’

He also  denied that Spain has not been placed on the travel red list because the UK would not have the capacity to quarantine all returning travellers.

The Transport Secretary was asked by Times Radio if this was the ‘real reason’ Spain had not been placed on the red list.

Mr Shapps replied: ‘We will always do whatever is required, and you have seen us do this so far with the red list to make sure that countries, even from destinations where there are a lot of people, would go on that red list if that is what is required.

He also explained why the Government is recommending travellers from Spain take a PCR test before they leave, saying scientists are ‘particularly interested in one of the new variants which is B.1.162’, currently prevalent there.

It estimates that in 2020 just over four million people wrote in to get their documents renewed.

The disappointing news comes as holidaymakers have been told they can travel abroad without ‘looking over their shoulders’ in fear of being caught out by changing rules.

Restrictions are being eased or limited for people arriving in England, Scotland and Northern Ireland from several countries from 4am on Sunday.

Fully-vaccinated travellers will be exempt from quarantine when returning from France, Spain has kept its place on the amber list, and India is among four countries being removed from the red list.

Seven nations will be added to the quarantine-free green list, including Germany, Austria and Norway.

Grant Shapps said the rollout of vaccinations in the UK and overseas means changes to the travel lists are being made every three weeks, compared with once a week last summer.

He told BBC Radio 4’s Today programme: ‘I hope people will be able to go away under this simplified system, enjoy their breaks and not be looking over their shoulders the whole time.’

But asked on Sky News whether Spain could be put on the red list in future, the Cabinet minister replied: ‘With coronavirus you can never say there is zero chance.’

Mr Shapps defended the decision to raise the price of quarantine hotels, which are mandatory for travellers returning to the UK from red list locations.

Mr Shapps told Times Radio: ‘It is necessary to cover the costs of the quarantine hotels and at the moment the system hasn’t been doing that and it has cost about £75 million, so we are keen to ensure people using them are covering the full cost of this service.’

Under the latest changes, India, Bahrain, Qatar and the United Arab Emirates are being moved out of the red list, while Mexico, Georgia and the French overseas territories of La Reunion and Mayotte are being added to that tier.

Austria, Germany, Latvia, Norway, Romania, Slovenia and Slovakia will be added to the green list.

The UK Government announced the moves for England, but the devolved administrations in Scotland and Northern Ireland said they will match the decisions.

The Welsh Government has not confirmed whether it will take the same action.

Mark Tanzer, head of travel association Abta, said confirmation that France is being aligned with other countries on the amber list is ‘positive’ news, especially during the ‘critical’ school holiday period.

But he warned that the Government is ‘failing to capitalise fully on the success of the vaccine rollout’ with a ‘very cautious’ approach to the green list and ‘failure to relax restrictions on travel, including requirements for multiple tests even when visiting low-risk destinations’.

He said: ‘As a result, the UK is falling behind our European competitors and the opening up of international travel from the UK is progressing at a snail’s pace – making it extremely difficult for travel agents and tour operators to generate enough income to kick-start a recovery, which is desperately needed to protect jobs, businesses and livelihoods.’

EasyJet chief executive Johan Lundgren said: ‘Now summer is fully under way, this provides some reassurance to consumers by keeping the status quo for key holiday destinations, as well as adding some green list destinations for last-minute bookers where there are still great flight and holiday deals available.’

But he added that the budget airline is ‘disappointed at the double standards applied to travel versus the domestic economy’.

‘With infection rates remaining lower in much of Europe and the high vaccination levels in the UK, if not now, it is hard to know when the time is for much of Europe to genuinely turn green,’ he said.

Spain has avoided being given red status, but the Government is advising travellers to take a PCR test before they fly home from the country.

A Home Office spokesperson said: ‘We continue to process passport applications promptly and last month 99.6% of passports using the urgent Fast Track and Digital Premium services were issued within their respective service standards.

‘Since the outset of the pandemic, more than 4.5 million people have delayed applying for a passport. With the potential demand for passports higher than ever before, passport processing times could change quickly. Since April we have been advising applicants using the standard service to plan to wait up to 10 weeks before they receive their passport.’

Canary Islands holidays: The joys of La Gomera, with its dramatic landscapes and mesmerising views

Norfolk, Suffolk and Lincolnshire among the top 10 counties for buried treasure

How Jack Grealish gets his signature hairstyle