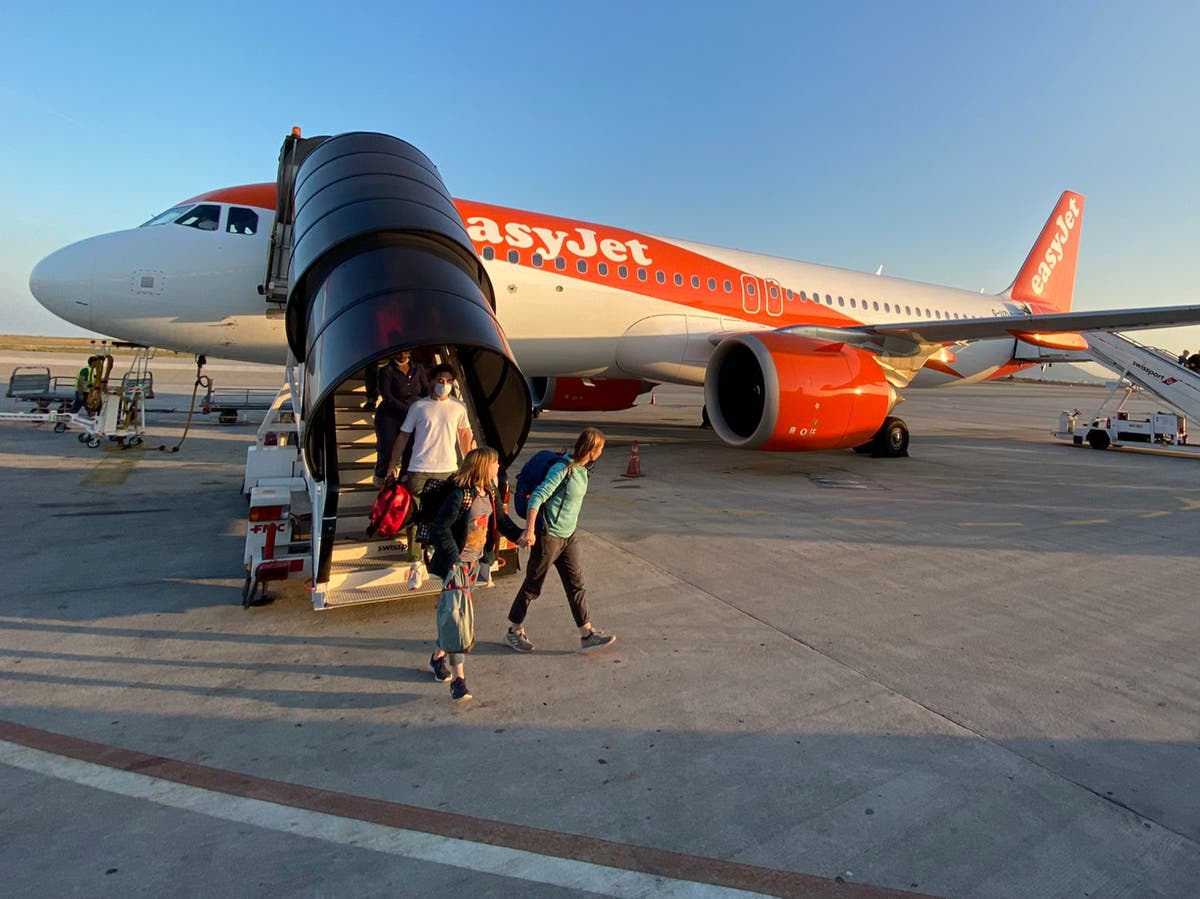 Half-term holidaymakers at Luton airport faced a nightmare staff to their trips over the weekend. Dozens of easyJet passengers missed their flights after problems demonstrating vaccination status on the NHS app.

Among those who got away, travellers on easyJet’s flight to Corfu visited Italy before being diverted to Athens for the night – after four attempts at landing at the Greek island were abandoned.

James Wilson, his wife and their two young sons were among the passengers who made it on to their plane – but only just.

“We got up at 3am to get a taxi from our home in Amersham to Luton for our 7am flight,” he told The Independent.

“When we got to Luton at 5am the terminal was rammed and the easyJet queue was snaking beyond the roped area. There were no staff around and no announcements.

“People on earlier flights were frantically diving under the ropes to avoid missing their flights. We had speedy boarding and entered the appropriate queue which led to a single lady and small desk, checking our Greek passenger locator forms and vaccine certificates.

“Then we were directed to the self-service baggage tag machines which again slowed things down as most people struggled to scan their bar codes and tried to work out how to attach the labels.”

Mr Wilson reported no delays with security, due to so many passengers being delayed at check-in.

“The duty free and shops area was impressive but no money was being spent there as everyone was late for their flights,” he said.

“We got to the gate around 6.30am and boarded immediately. The aircraft was pretty empty as most passengers were stuck at check in.

“We remained on the aircraft until around 8am when the captain couldn’t wait any longer and we left without 27 passengers and their bags had to be offloaded.”

A spokesperson for easyJet said that a total of 40 passengers across nine flights from Luton were left behind. The cause was “a temporary outage of the NHS Covid vaccination app causing issues for some customers who had not printed or saved it to their their smart phone”.

The spokesperson said: “Any passengers who missed flights because of the delays were able to transfer free of charge.

“We would like to thank passengers for their understanding and apologise for any inconvenience caused.

“We recommended all passengers from Luton to allow extra time for bag drop as a result.”

For the Wilson family and the other 150 or so passengers on the flight to Corfu, problems were only just beginning.

Mr Wilson reported: “Seconds from landing at Corfu the flight deck engaged full thrust and we accelerated back into the sky.

“We did a go-around but exactly the same thing happened again.

“We then diverted to Brindisi [in Italy] where, after a bit of a wait, we were bussed to the terminal and spent around 90 minutes there.

“We were then bussed back to the aircraft and the captain said he would ‘give it another go’. Same thing happened again. He said he would try it one last time before finding somewhere ‘more permanent’ to go to.

“The same thing happened again. Apparently there was very low cloud right above the runway. There were plenty of clear patches on approach but we were also ‘dancing around’ thunderstorms each time and it was pretty bumpy.

“Children were being sick and the cabin crew got through all their sick bags and started handing out bin liners.

“The captain said that there wasn’t enough time left for the crew – they had run out of hours I guess – and we passengers didn’t really want to go through this all again.

“We finally flew to Athens. We landed smoothly and were reunited with luggage fairly quickly. We then waited around an hour for a coach to come and there was a scramble to get places on board.”

The plane arrived in the Greek capital at 6pm local time, six hours after it was due to be arriving in Corfu.

How safe is it to travel by plane, train or cruise liner?

Why some European cities want to keep the tourists away

The joys of Jersey for an almost-foreign holiday

Do Sports Results Move The Markets? Researchers Suspect They Do