By Darren Boyle for MailOnline

This is the incredible moment a friendly grey whale kissed a boatload of tourists before spraying them with water.

Alex Banky, 36, was on a boat tour of Magdalena Bay, Mexico, when a curious 45-ton whale started to surface near his vessel before ducking back underwater.

Amazing footage filmed on February 1 shows the grey reappear right next to Banky’s boat and bob its head so close that passengers were able to kiss its giant chin.

Tourists, including Alex Banky, from Rhode Island, were able to ‘kiss’ the grey whale during a boat trip off the coast of Magdalena Bay, Mexico 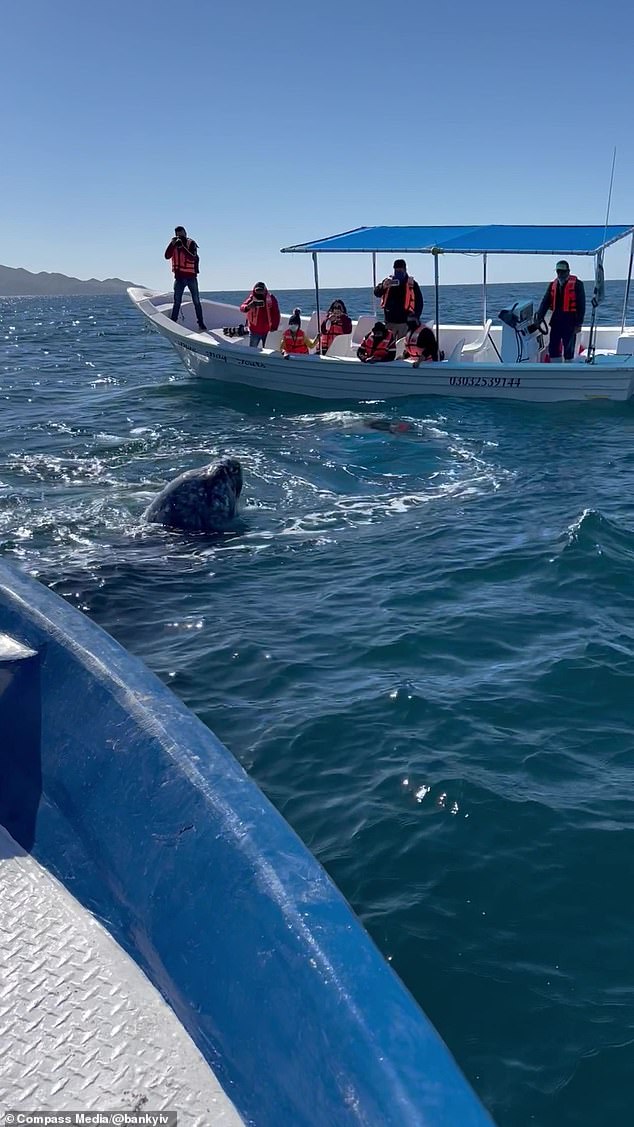 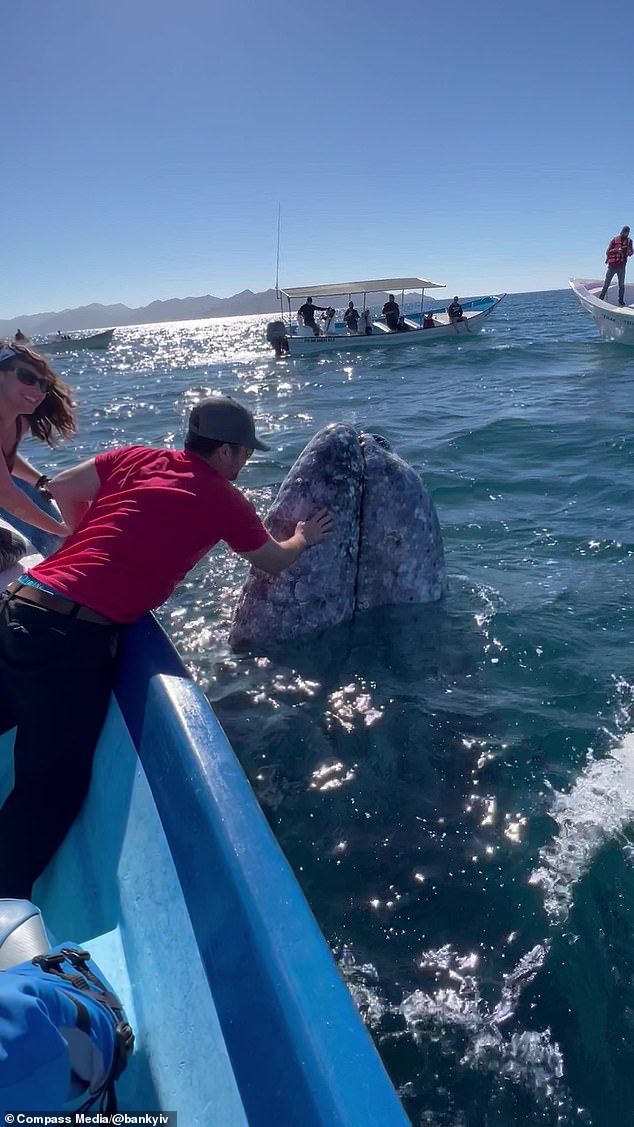 Alex Banky, 36, pictured leaning across to the whale said the encounter was a wonderful experience. Footage of the whale has been watched by almost 250,000 online

In the video – which has been viewed more than 248,000 times online – the whale moves through the ocean allowing Banky to rest his head against its own before spraying everyone with water from its blowhole.

Banky, from Rhode Island, said: ‘It was an amazing experience; I was vibrating, after the several close encounters we experienced.

‘It was a magical, humbling, one-of-a-kind experience.

‘I’ve seen whales before, but from a distance. I’ve had some closer calls with breaching humpbacks off the coast of India, but nothing like this.

‘I never imagined touching or even kissing a whale. I believe it was between 40 to 50 feet long.

‘The whale just had a clean, ocean smell. It was soft and smooth to touch and a little rubbery. 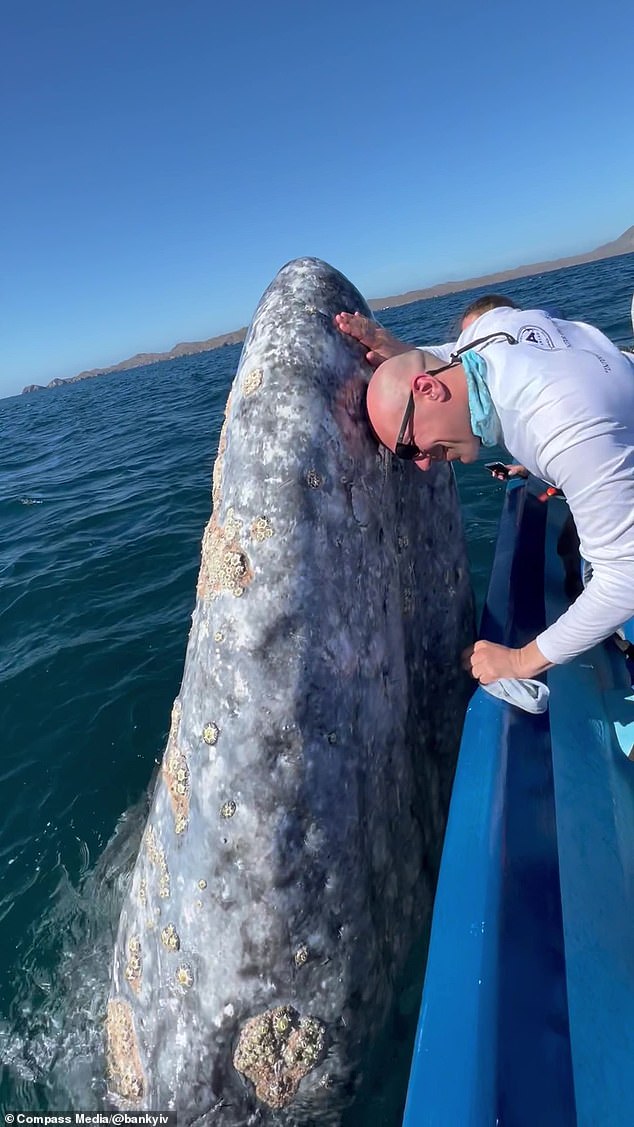 The whale, pictured, migrates from its summer feeding ground in Russia to the Pacific east coast where they breed and calve new offspring 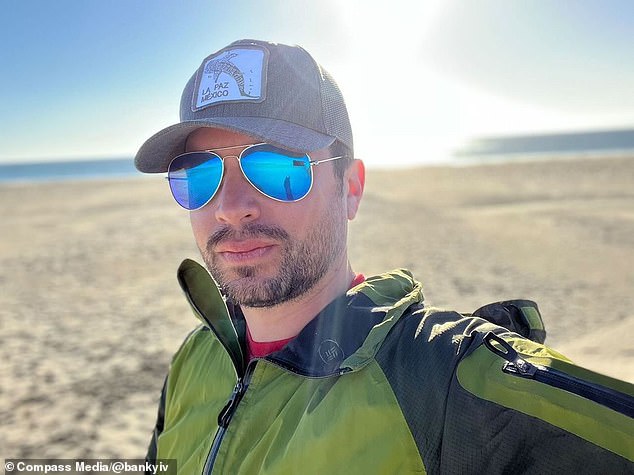 Banky, pictured, said: ‘I was vibrating, after the several close encounters we experienced. It was a magical, humbling, one-of-a-kind experience’ 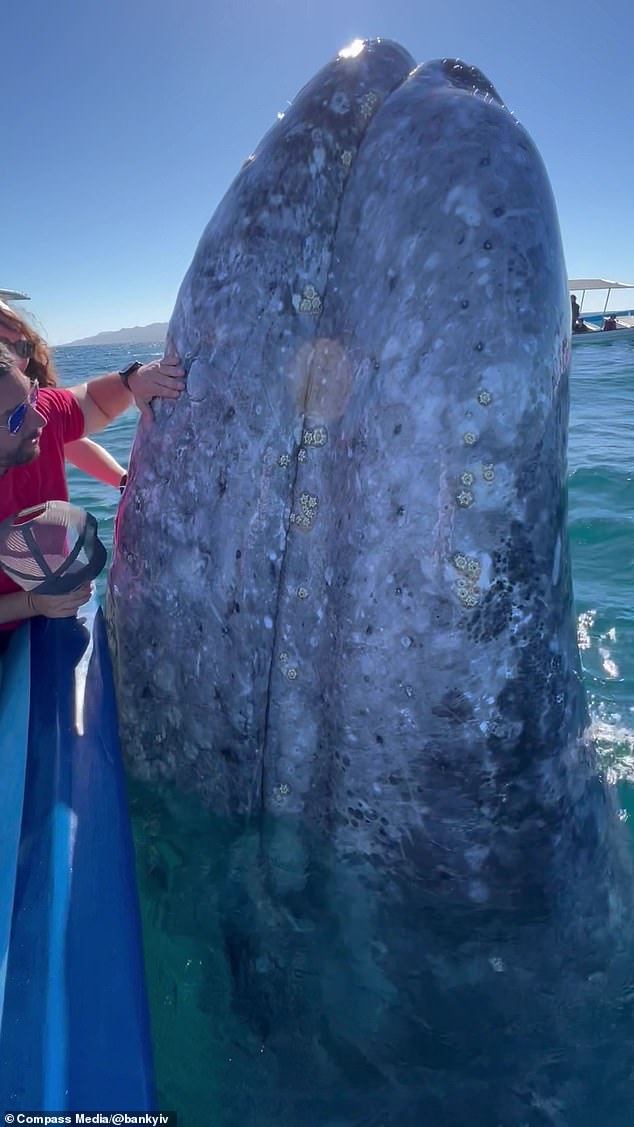 ‘Also the skin had give to it, which I guess I should have known being it is a mammal. In hindsight I had zero idea I was even going to be this close, never mind touching or kissing.’

‘We spent two days in the area exploring sand dunes and rocky points, as well as following the whales around.

‘It makes you understand that we are all connected somehow, and that even though this animal could easily capsize the boats we were on, it chose to be curious and kind.

Banky took the boat tour to celebrate becoming an officer in the US Merchant Marines.

‘This was a celebration vacation, as I just became an officer. I am a hawsepiper, which means I started from the bottom and worked my way up the ladder.’

What are grey whales?

Grey whales are a type of baleen whale – which means they are filter feeders and do not have any teeth.

They extract food through ‘special bristly structures’ in their mouth, according to the World Wildlife Federation.

They spend much of their lives near the shore feeding in shallow waters, though they do an annual 12,000-mile round trip migration.

The grey whale does not have a dorsal fin and instead has a hump and a ridge of sharp bumps along their back.

In late May or early June, grey whales swim to their summer feeding grounds off the Russian coast.

In autumn, they head to the South China saw before returning to the US west coast and Mexico to breed and have their calves.

The young whales spend their time in lagoons where they avoid the attentions of killer whales.

The grey whale can eat 1,200kg of food in a single day and is classed as Critically Endangered, having been almost wiped out by commercial fishing in the mid 20th century.

Revealing 22 amazing activities you can do on a cruise, from go-karting to ‘walking the plank’

Bengal eyes revival of tourism this Durga Puja amid pandemic

‘Unprecedented’ rain falls at Greenland summit for first time since 1950

The 30 UK sights every Briton should see within their lifetime ranked, from Stonehenge to Ben Nevis

The joys of a winter paddleboarding safari on the River Tyne

These are the countries welcoming fully vaccinated travellers