France holidays: A review of the Hotel Splendide Royal Paris located near the Champs-Elysees

The French abolished their monarchy in 1792 – but they certainly still know a thing or two about living like royalty.

A point underscored with aplomb by Hotel Splendide Royal Paris, which occupies a 19th-century mansion house a stone’s throw from the Champs-Elysees and President Macron‘s Parisien home, the 365-room Elysee Palace.

Grand company. But the Splendide Royal holds its own. It only has 12 suites, a drawing room and a restaurant, but it’s exquisite – a pocket-palace. 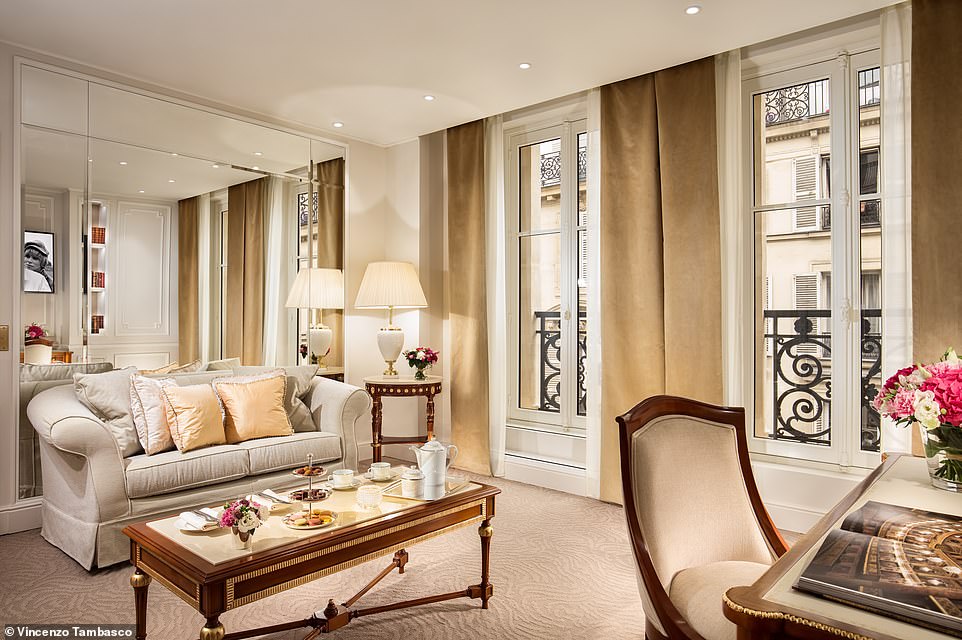 Ted describes the Suite Elysee as a ‘700-square-foot haven of hushed elegance, soothingly luxurious with regal flourishes’. Pictured is the suite’s living room 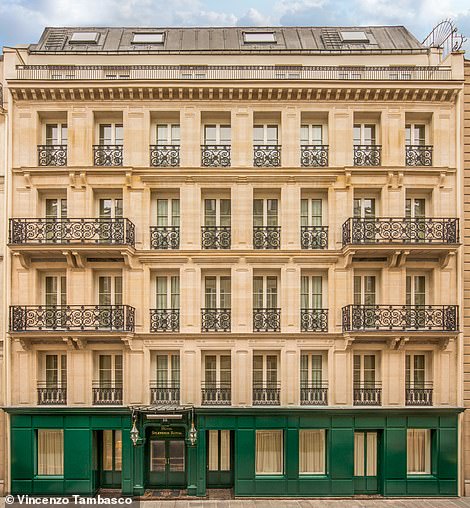 My partner and I, and our four-year-old daughter, spent the night in the fourth-floor Suite Elysee (room 401), which would get the royal seal of approval from King Louis XVI and any French monarch before him you care to mention.

It was a 700-square-foot haven of hushed elegance, soothingly luxurious with regal flourishes – think ornate lampshades, oil paintings and beautiful furniture embellishments – and hues that ebbed from white to cream to gold.

The first order of business was to soak it all in while reclining on the plush sofa in the living room and quaffing Champagne offered as part of the checking-in process.

This area contained a loo and a big wall-mounted TV, plus a kitchenette complete with a sink, microwave, Nespresso machine and fridge.

By the sofa was a mini wine fridge stocked with yet more Champagne and fine wines, including two classy Italian reds – Montepulciano and Barolo (70 and 100 euros respectively, though they retail for around £25 and £42). 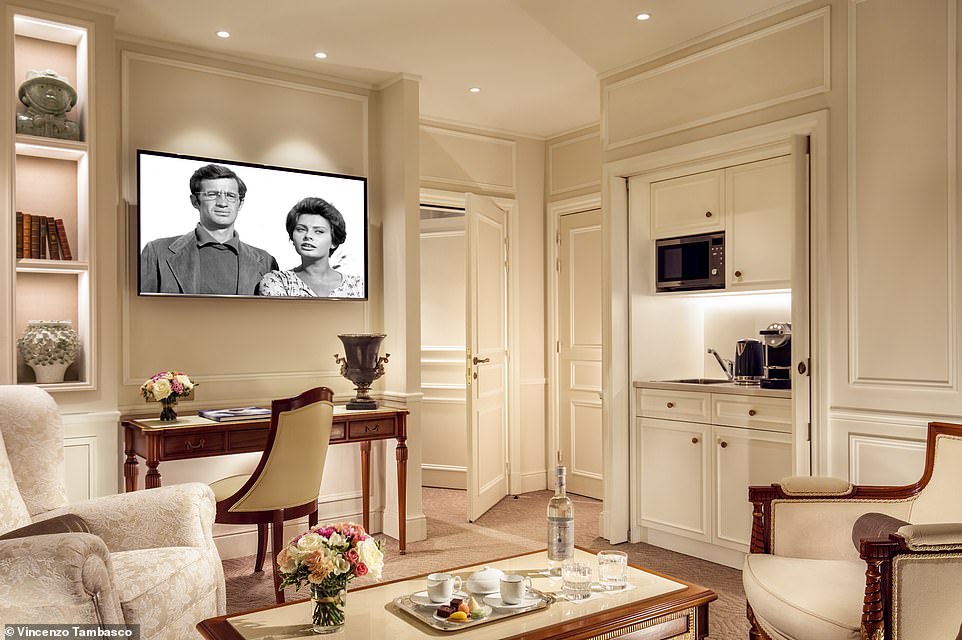 The living room contained a loo and a big wall-mounted TV, plus a kitchenette complete with a sink, microwave, Nespresso coffee machine and fridge 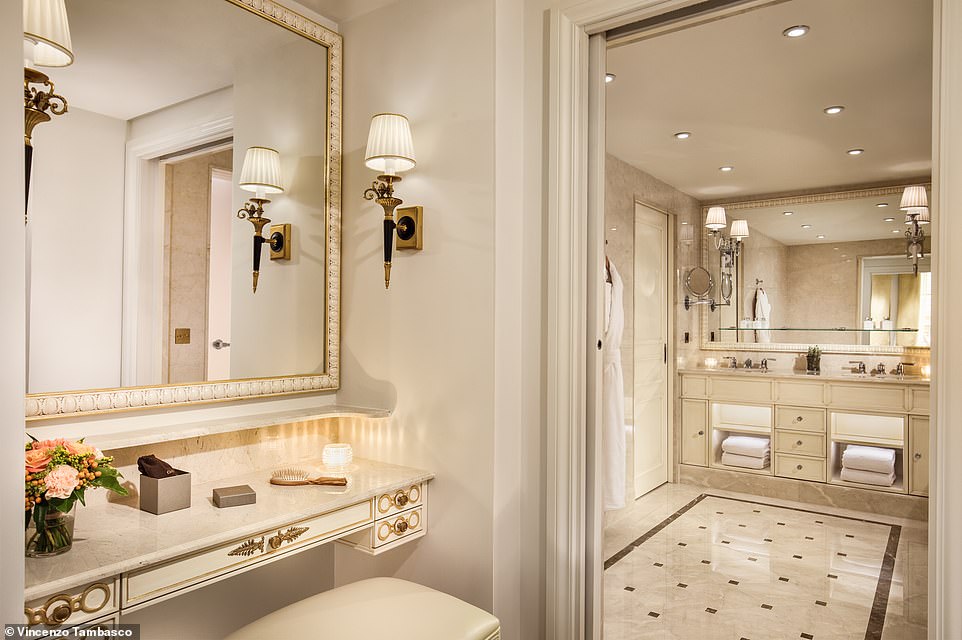 Marble-ous: This image shows the dressing room area, which leads through to an opulent en-suite 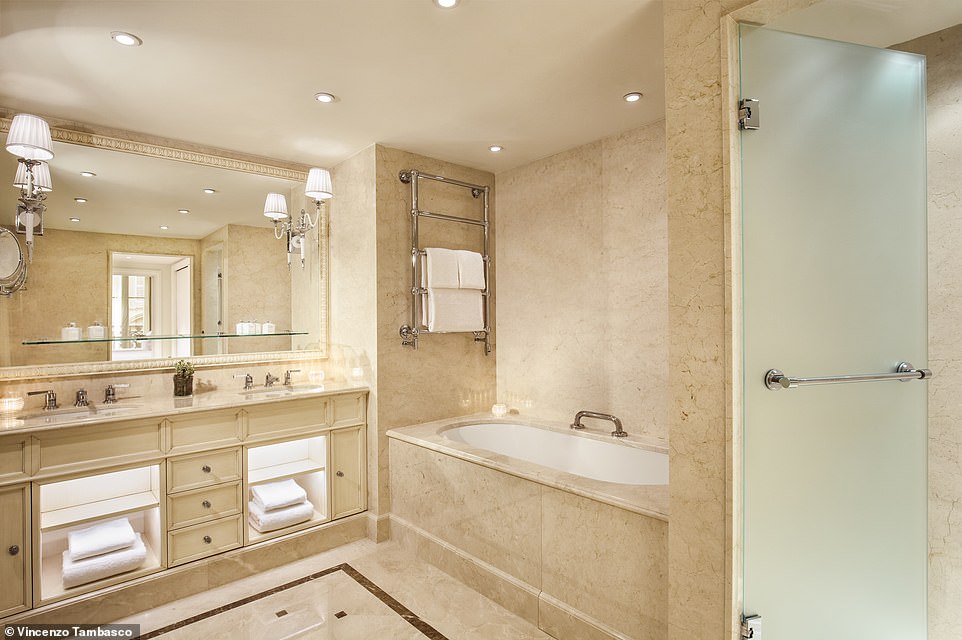 The marble-clad en-suite bathroom has Lorenzo Villoresi toiletries, marshmallow-soft robes, a double sink, a (most invigorating) separate shower (rain plus hose) and another separate loo 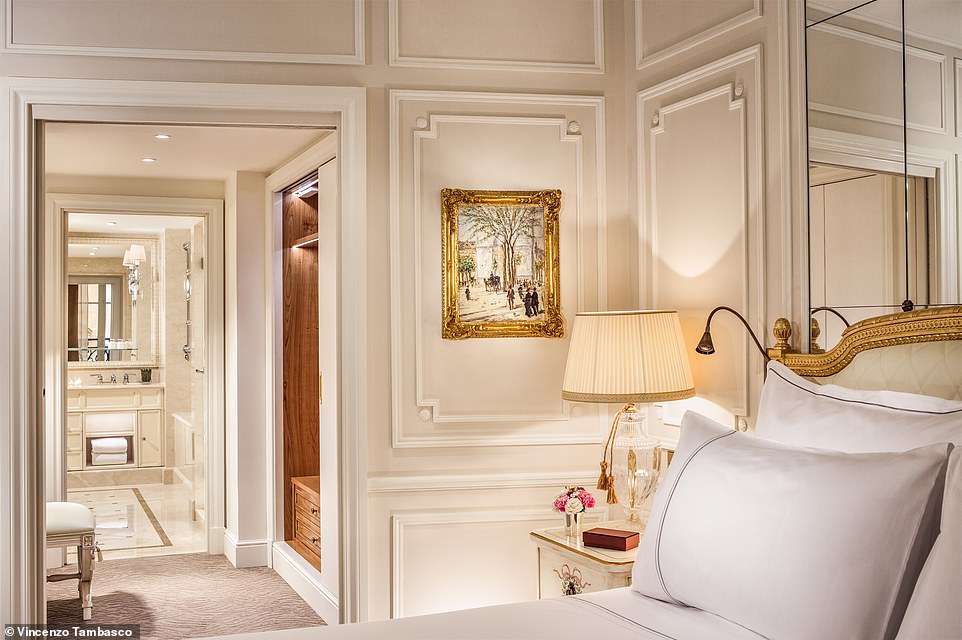 The adjoining bedroom housed a mammoth bed smothered in fine linens and to the left a dressing room with double wardrobes leading to a marble-clad en-suite bathroom with Lorenzo Villoresi toiletries, marshmallow-soft robes, a double sink, a (most invigorating) separate shower (rain plus hose) and another separate loo.

What’s more, the Wi-Fi for the room was in a class of its own – all we had to do was select ‘Wi-Fi Room 401’ for instantaneous access to a full-fat turbo-charged signal. No sign-in. No password. 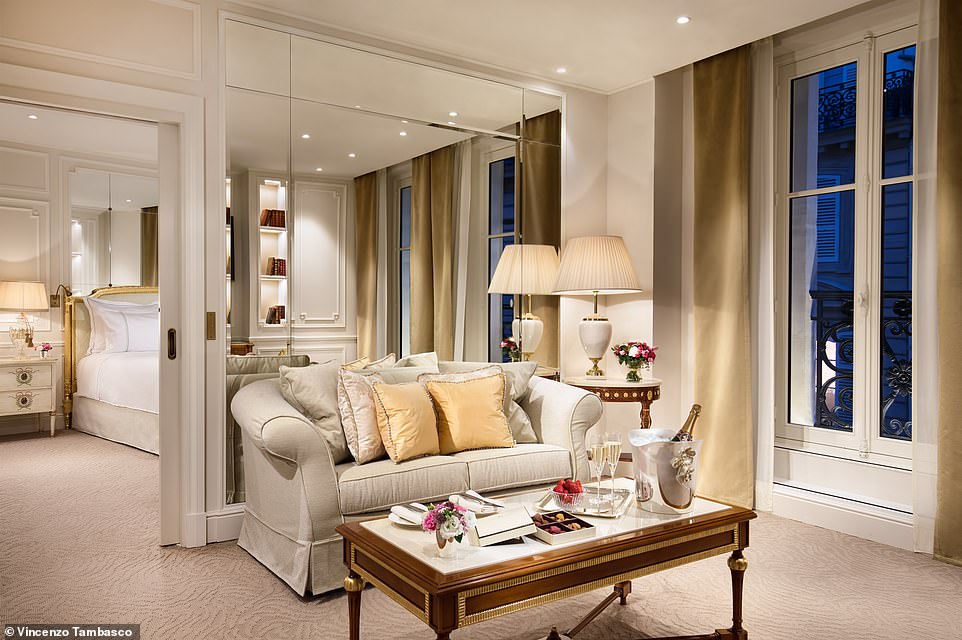 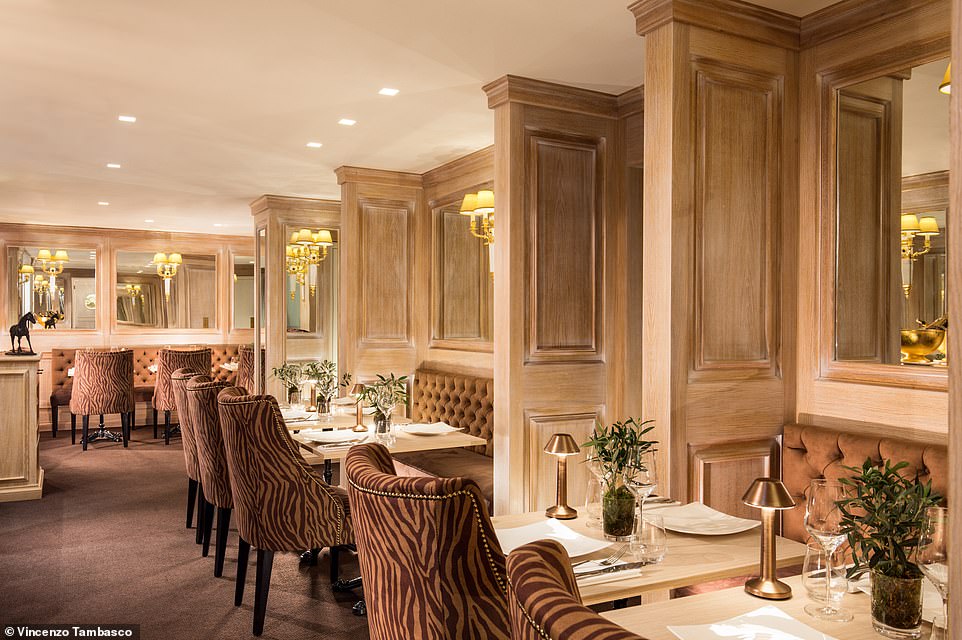 Downstairs is the hotel’s renowned Italian restaurant – Tosca. Sadly, it was shut when we visited for the night, but we did get to ensconce ourselves in the sumptuous venue for breakfast, which was a joy.

Pain au chocolat and croissants were offered from a basket and as I sipped a superbly smooth coffee I perused the menu, which explained the provenance of the fare on offer.

The bread and pastries come from a local Parisian baker, the jams are by Lise Bienaime at La Chambre aux Confitures, the tea by Dammann Freres (King Louis XIV, I learn, granted Sir Damame the ‘exclusive privilege’ to sell tea in France in 1692). And the milk? That’s from the Laiterie cooperative de Verneuil courtesy of cows raised on the pastures of the ‘beautiful Touraine region’. 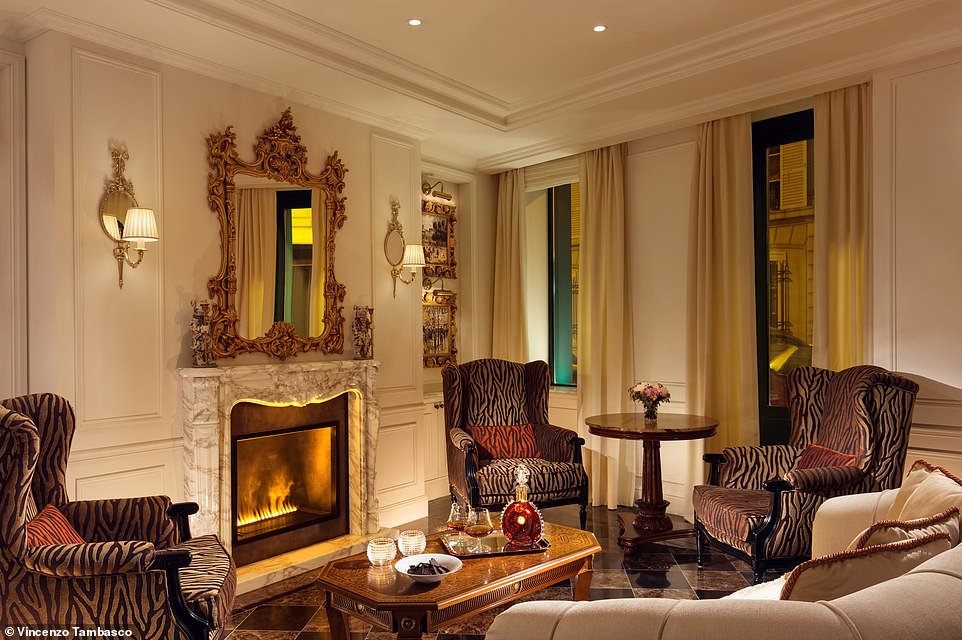 Ted describes the staff at the hotel as having impeccable manners. Pictured here is the ‘refined’ drawing room 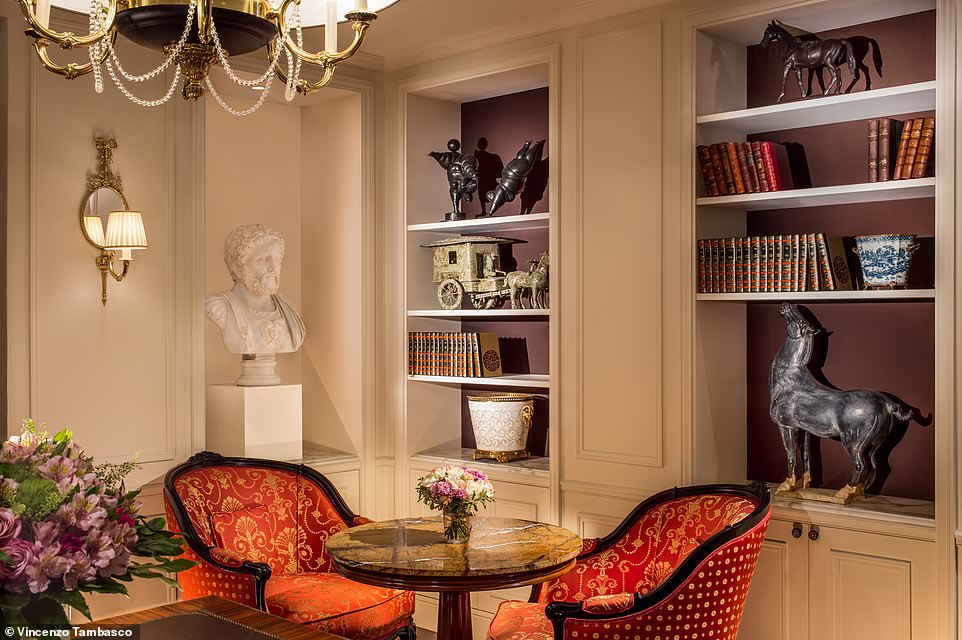 The Wi-Fi at the hotel, raves Ted, is ‘in a class of its own’. In his room no sign in or password was needed. Pictured is the drawing room 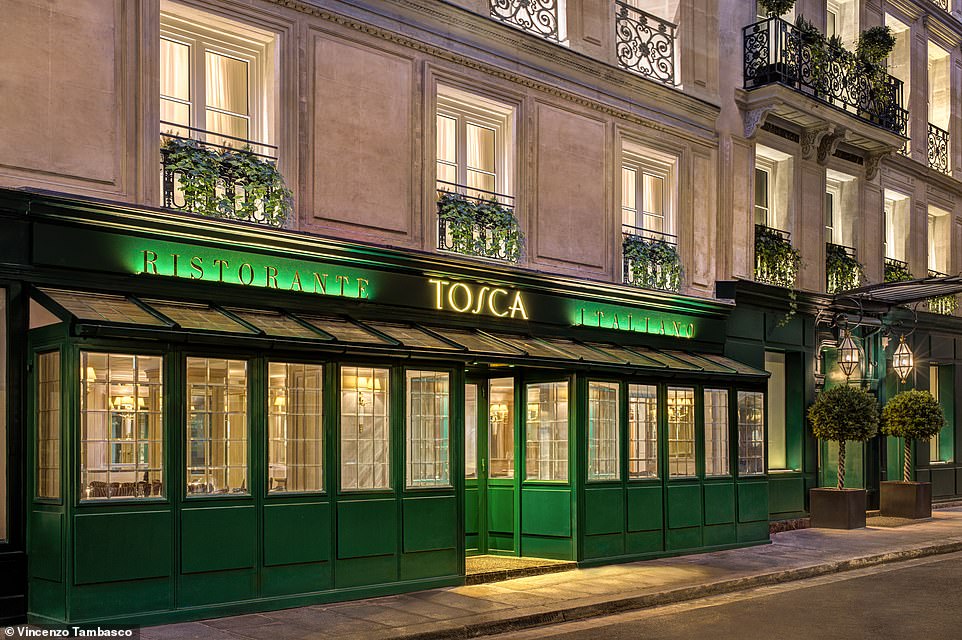 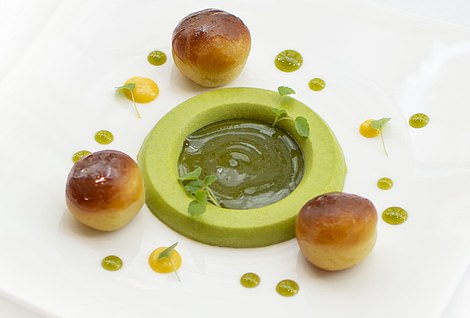 Mouthwatering: A dish served at Tosca

Quality produce – and I can vouch for the cheese omelette whipped up by the chef, too.

The service, meanwhile, was faultless – our waitress and waiter impeccably polite. Young, but their manners were from another era.

The reception staff, too, displayed old-school courtesy, standing up behind the desk when making conversation and helping to make this fine-tuned hotel impossible not to fall for.

Ted was hosted by Hotel Splendide Royal Paris, 18 Rue du Cirque, where rooms cost from £520 a night for a Junior Suite Saint Honoré for two adults. Rooms can be booked via Booking.com.

Ted used the superb Blacklane chauffeur service to get to St Pancras International. It has a brilliantly user-friendly booking system and operates in more than 200 cities around the world. Visit www.blacklane.com/en.

Chaos in Sydney as visitors come back after nearly two years

What are the COVID entry rules for travelers to European countries?

What are the new travel testing rules?

Reopening one train line in Devon is a start – but rail users expect more, Mr Shapps

How often does the average UK adult need a break?