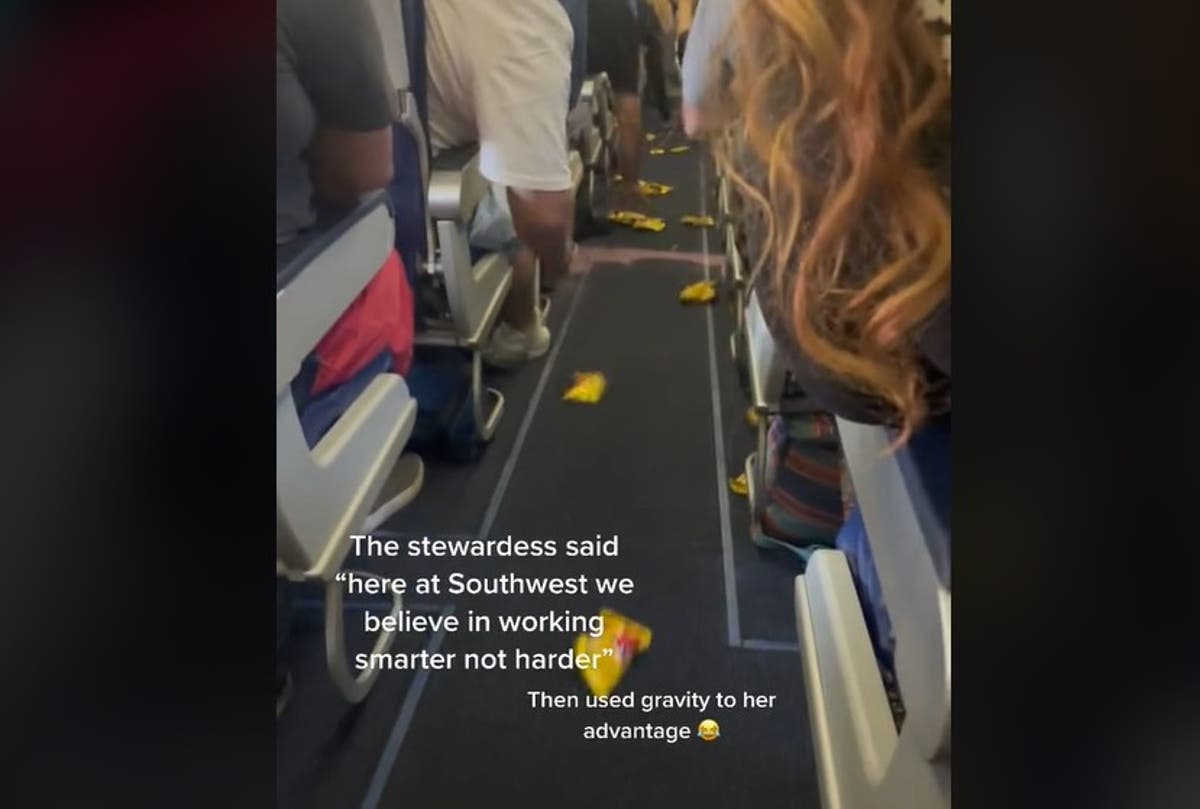 One US flight attendant has demonstrated an unorthodox method of handing out snacks to passengers – using the plane’s upwards tilt to slide snacks down the aisle.

The quirky service style was filmed by TikTok user @ToxxicTinkerbell on a Southwest Airlines flight.

The passenger initially captioned the video: “The stewardess said ‘here at Southwest we believe in working smarter not harder’ – then used gravity to her advantage.”

She later re-posted the video without music so her followers could appreciate the cabin crew’s witty commentary.

“Keep passing ’em back,” a female crew member is heard saying over the tannoy as the bright yellow packets of inflight snacks are thrown down the tilted aisle of the plane by staff.

Passengers grab the snack bags from the floor as they whizz down the middle of the cabin.

The flight attendant then jokes, “Here come your drinks,” before quipping, “Now, seriously – go to sleep.”

Passengers on the flight appear tickled by the move, with audible chatter and laughter as one customer comments, “Funny”.

But TikTok viewers were divided over the move, with user Coco commenting, “That’s unsanitary,” and another user replying, “Mmmm, floor food.”

Many followers felt it clashed with Covid-era hygiene rules on flights.

“I don’t want to pick up a snack off the floor, that’s just weird,” said user @liventhemoment88.

Others praised Southwest staff’s sense of humour, saying “They seem so fun,” and “This cracks me up! Who doesn’t need a good laugh during a flight?”

Southwest Airlines staff have starred in several social media videos thanks to their at times madcap approach to hospitality.

One crew member was filmed making a veil, crown and tiered wedding cake out of toilet paper and snack packets for a bride-to-be on the flight, before presenting them to her with a tannoy announcement and asking her to walk down the aisle with them.

“Best flight attendant ever!” wrote the TikTok user who captured the video.

In another social media video, a Southwest employee was filmed singing a jaunty song on a flight to Hawaii to applause and cheering from passengers.

In need of some half-term holiday sun? Snap up these top October deals while you still can

Why Paris is the easy, breezy weekend break you need right now

The rise and rise of Responsible tourism

Centre gears up to resume issuing tourist visas after 1.5 years

Which microwave meal has the most health appeal?