Down in the town square, ­children skate on the ice rink or rolling around in the snow.

Beyond a white picket fence, the sound of horse’s hooves briefly interrupts Christmas carols as an open carriage makes its leisurely way around a ­picturesque, lily-ponded lake.

But the chocolate box scene is not what it seems. The ice is fake, the snow is made of soapy foam, the picket fence is PVC and the music is piped up from speakers hidden in rocks under palm trees.

And if you decide to venture into the lake, you risk getting bitten by an alligator.

Celebration, the town that Disney built.

Pedestrians walk across Market Street in downtown Celebration. The town was conceived as a small southeastern town with pre-1940s architecture. Celebration is near Walt Disney World Resort and was started by a division of the same company

Founded 28 years ago, in the swamplands of central Florida, a short drive south of Orlando and the vast Disney World theme park, it was the fruition of Walt Disney’s personal dream to create a utopian community that might rightly claim to be the happiest on Earth.

For people who had revelled in a few days of clean-living, family-friendly perfection at a ­Disney theme park, here was a chance to ­experience it permanently.

More than 4,000 ­people entered a lottery to pay 25 per cent over the market price for the first 500 homes.

Since then, the once tiny town has sprawled to cover 4,900 acres, boasting a population of 11,000, including several hundred British expats.

Their home is like a film set, with a conscious attempt to recreate a small-town America of a safer, friendlier age.

Critics railed at the notoriously ­controlling Disney corporation with its rules on everything down to ­residents’ choice of garden plants.

Celebration earned comparisons to the creepy Connecticut idyll in the thriller The Stepford Wives, in which the identically docile wives are robots created by their husbands. 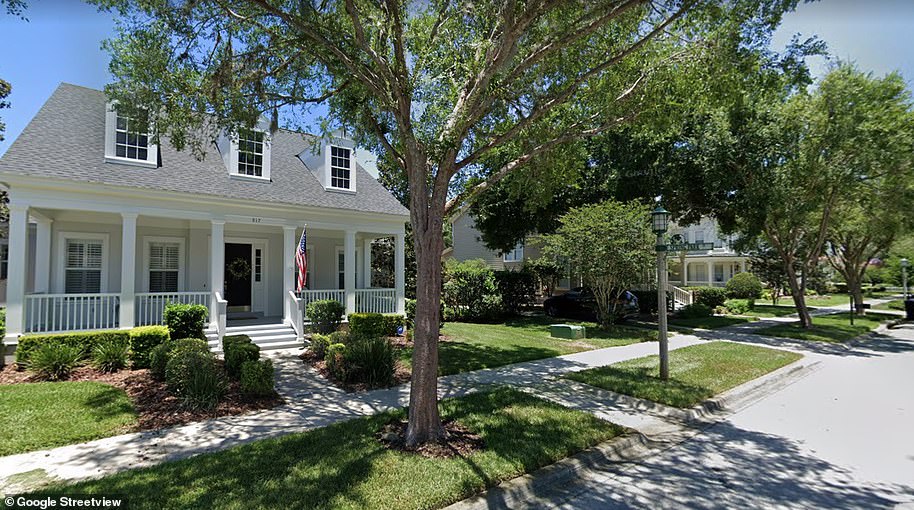 Everything is picture perfect along the quiet residential streets of Celebration, Florida

But the locals just smiled at the jibes, a small price to pay, they said, for living in a place where you could leave your front door unlocked, where children could play freely in the streets, and where the most serious crime was a stolen bicycle or two.

However, as with the fake snow (nicknamed ‘snoap’) and picket fences, Celebration’s reassuring ­exterior could not hide the unseemly passions of ordinary life for ever.

The Christmas red ribbons festooning every other bush in Celebration were joined by yellow police tap.

The little children’s train that chugs through town suddenly found itself upstaged by the police tank that was brought in with a SWAT team to ­surround Mr Foushee’s home.

Police have been quick to reassure everyone there is no crime wave in Celebration.

Celebration was designed to create a small-town feel by bunching houses close together and encouraging neighbors to talk to each other and walk rather than drive to the ‘olde worlde’ town centre. 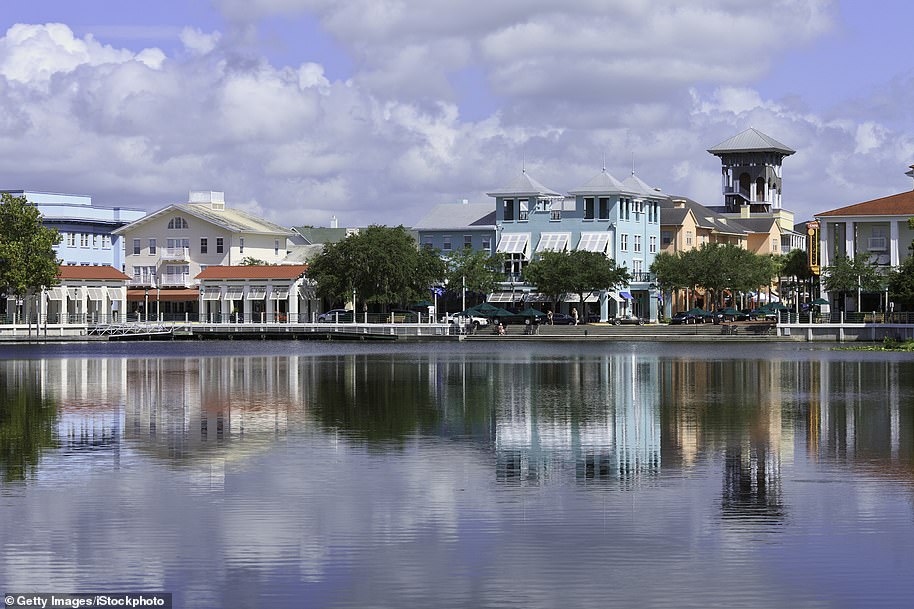 Reflections on the water highlight a Lakeside View and the unique multicolored downtown shopping and restaurant district of Celebration, Florida 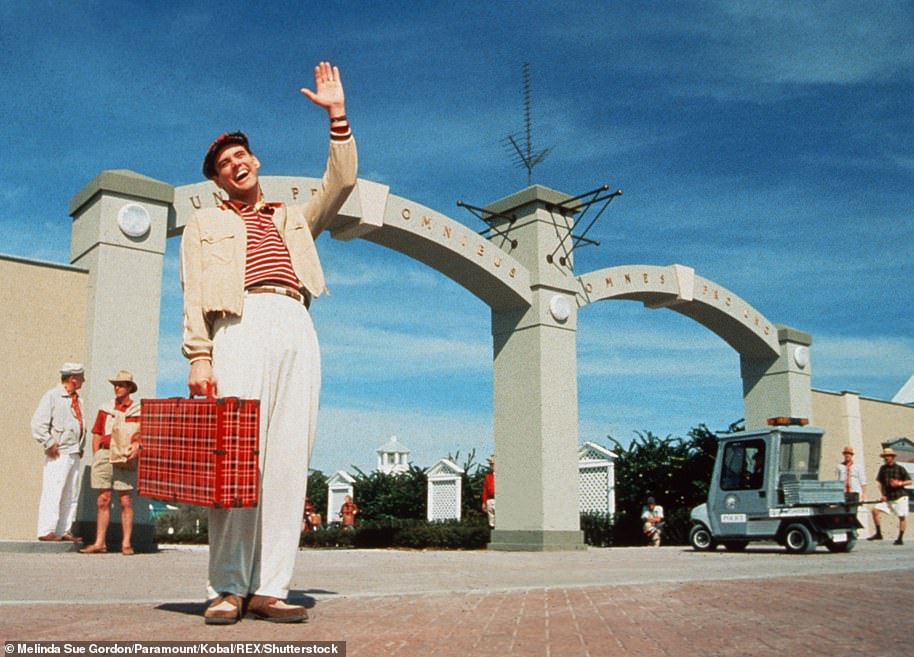 Celebration has an almost painfully contrived ­prettiness and physical ­perfection so it is not ­surprising that visitors mistake it for the setting of The Truman Show, the film starring Jim Carrey, in which the hero grows up in a fake town as the unwitting star of his own reality TV series

Architectural styles are a mix of ­Victorian and pre-war America — a possibly unconscious reflection of the social values Disney was trying to recreate.

An almost painfully contrived ­prettiness and physical ­perfection — the town even used to import fallen leaves to waft around in fall — is the order of the day and it is not ­surprising that visitors mistake it for the setting of The Truman Show, the film starring Jim Carrey, in which the hero grows up in a fake town as the unwitting star of his own reality TV series.

As planned, Disney sold its stake in the town in 2004 to a property ­company which promised to remain loyal to its founder’s ethos. The ­original residents’ rule book was ­several inches thick but many of its strictures survive.

No two adjoining houses can look alike (builders can choose between a handful of permitted house designs), no home can have more than two cars on the street, the blinds or curtains have to be white on the outside.

Even the compost for the plants is specified. 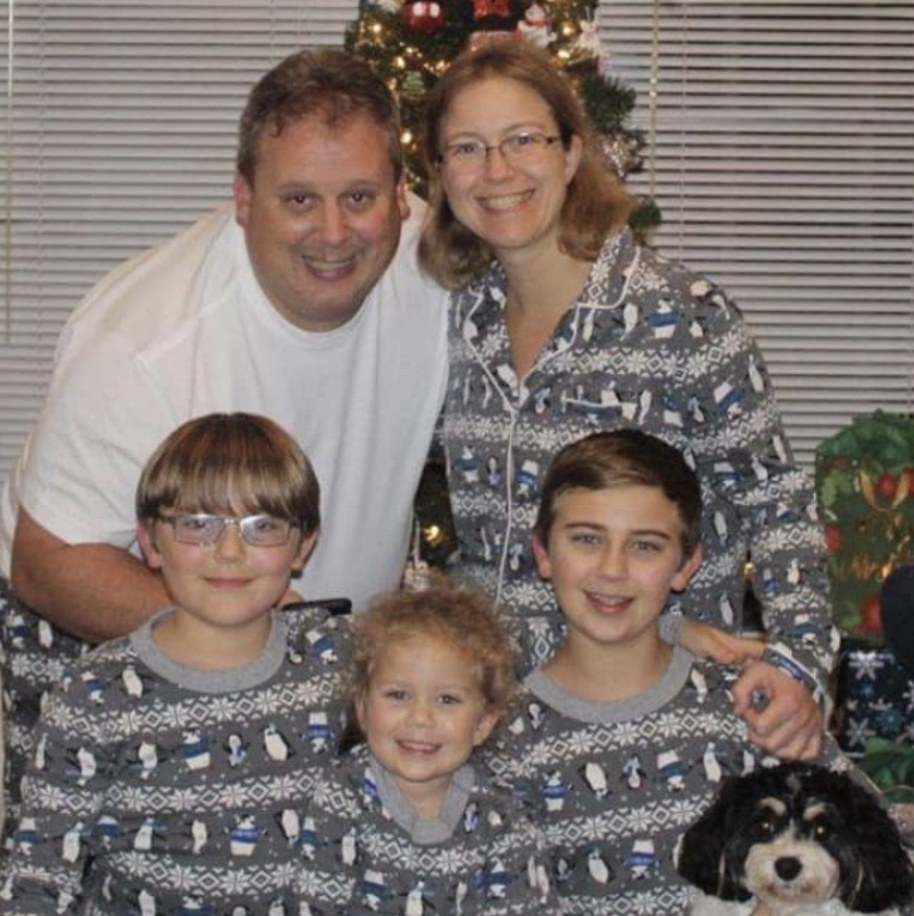 Anthony Todt, confessed to killing wife Megan, children Alek, Tyler and Zoe, and dog Breezy at their home in Celebration in January 2020 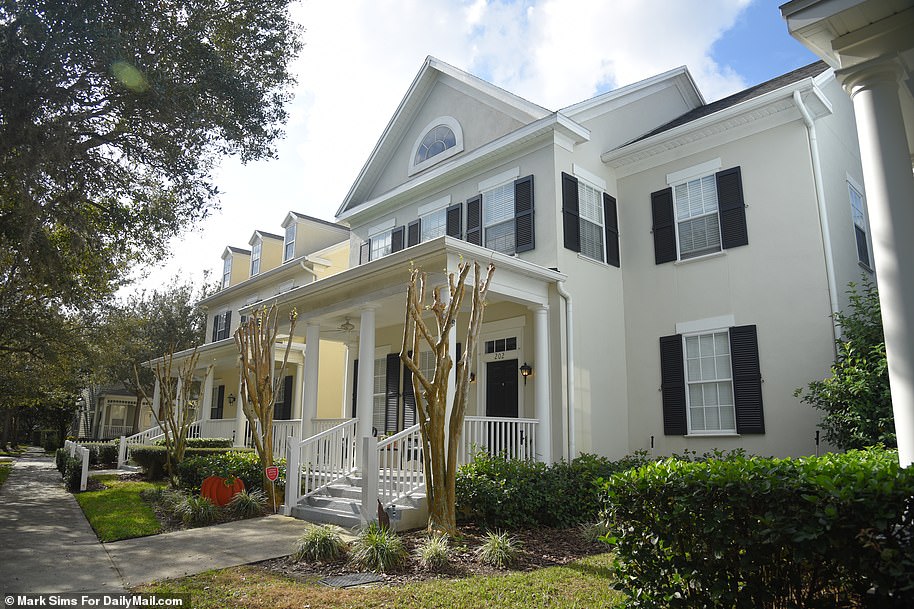 Todt previously confessed to sheriffs to the killing of his wife, three children and their dog inside their home (above), as it emerged he had been grappling with debts

Locals like to joke that they live in ‘The Bubble’, but that was noisily punctured in 2010 when ­Celebration recorded its first murder.

Prior to that, you have to go back to 2002 when a couple were tied up and held at gunpoint in their home, to produce the last serious incident.

After a 14-hour stand-off with police, 52-year-old Craig Foushee, a former airline pilot who was deeply depressed following his divorce, loss of home and the failure of his security business, shot himself. His wife had recently accused him of assault.

In 2020 another mass murder rocked the community.

Anthony Todt, 46, murdered his wife and three children inside their Disney town home and lived with their bodies for at least two weeks.

Todt, who was crippled with debts, confessed to killing his wife Megan, their children Alek, 13, Tyler, 11, and Zoe, 4, and dog Breezy. 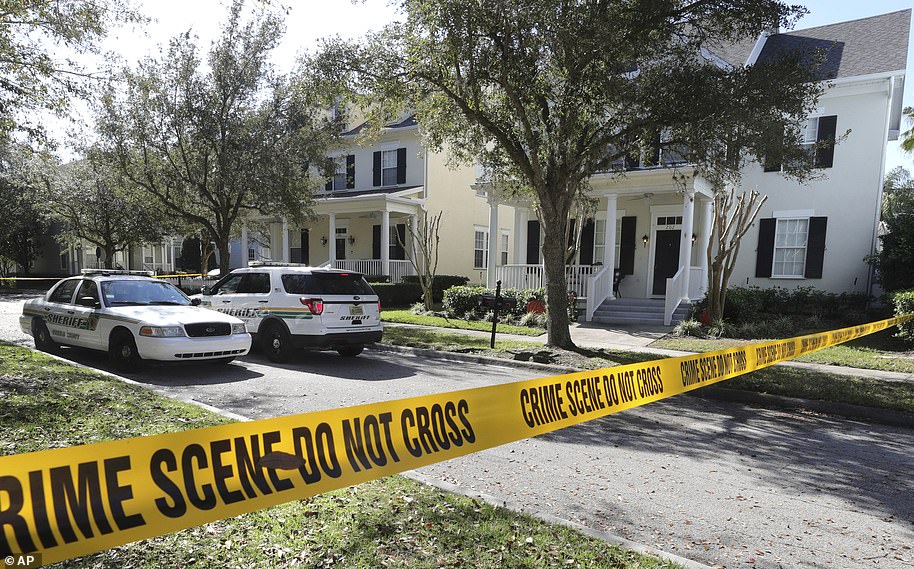 The house in Celebration, Florida, where the bodies were discovered more than two weeks after the murders

The world’s most dangerous roads revealed, with the A1010 deemed worst in the UK

Sex and the City apartment becomes an Airbnb: Sarah Jessica Parker to welcome guests to recreation

Not sure if family holiday parks are for you? Why now is the time to give it go

Parineeti Chopra’s tryst with Everest is all about ‘humility’

Merdeka 118, the world’s second-tallest building, is now complete, reaching a height of 2,227ft