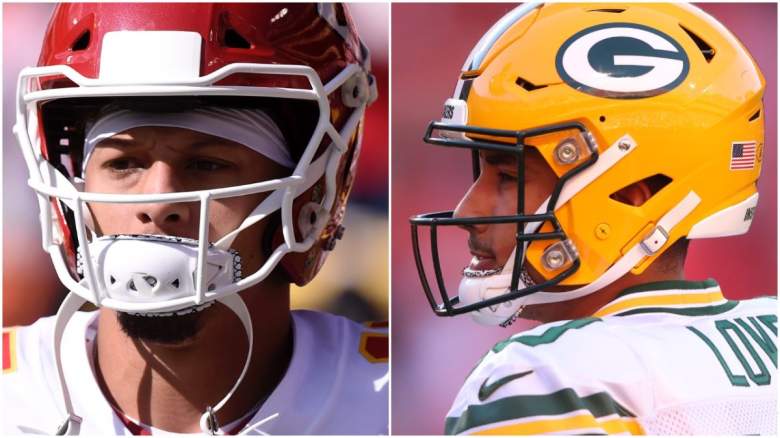 Patrick Mahomes could sympathize with Jordan Love after the Kansas City Chiefs’ 13-7 win over the Green Bay Packers at Arrowhead Stadium in Week 9. Not because Love had lost the game, but because Mahomes has been through a similar process to what the second-year quarterback is currently going through.

Love — a 2020 first-round pick — drew the first start of his NFL career against the Chiefs due to Aaron Rodgers being sidelined because of COVID-19, and it was the first real chance Love got to show Packers fans and the rest of the NFL what he’s capable of. Because of who he is sitting behind, Love has had no opportunities in his young career prior to Week 9 — besides the preseason or during blowouts — to showcase what he can do with some meaningful reps as a professional.

This was similarly the case for Mahomes, who sat during his rookie season in 2017 behind Alex Smith — a QB with 12 years of experience and 116 career starts under his belt at that point. The only time Mahomes was under center that season was in August and then during a Week 17 win over the division-rival Denver Broncos in which he was the starter.

That’s why Mahomes caught Love’s ear after the game and shared some wisdom with the young Packers QB.

The latest Chiefs news straight to your inbox! Join the Heavy on Chiefs newsletter here!

Mahomes to Love: Learn as Much as You Can

“It’s well-documented that he’s in kind of a similar situation that I was in, where you’re behind a great quarterback that has done it for a while – that does all the things the right way,” Mahomes said. “Just learn, just learn as much as you possibly can. Knowing that you want to play, but whenever your time comes, you have to be ready. For him, I know he’s going to continue to learn. He has a ton of talent and when his time comes, I’m sure he’ll be ready.”

Love Swallowed up By Chiefs Defense

Love had a tough go against a Chiefs defense that’s trending upwards. The second-year QB completed 19 of 34 pass attempts for 190 yards, one touchdown, and also threw one interception, according to ESPN’s box score. Love and the Green Bay’s offense managed just seven points against the Chiefs, who have put together back-to-back strong defensive performances after allowing just 17 points to the New York Giants in Week 8.

However, the Kansas City offense continued to struggle.

Against the Packers, quarterback Patrick Mahomes completed 20 of 37 pass attempts for 166 yards and one touchdown. The defending AFC champions mustered up just the one touchdown and two field goals against Green Bay. However, they recorded zero turnovers, which was the first time they hadn’t turned the ball over since their Week 1 victory over the Cleveland Browns.

Now sitting at 5-4 on the season, the Chiefs are in third place in the AFC West, behind the Los Angeles Chargers (5-3) and the Las Vegas Raiders (5-3), and are above the Broncos (5-4). In Week 10, Kansas City will face the Raiders in Las Vegas on Sunday, November 14 in primetime.

Discover more from Heavy on Chiefs↓

Is the Italian Grand Prix on TV today? Start time, channel and how to watch

Lambs can identify their mother through her bleats, study finds