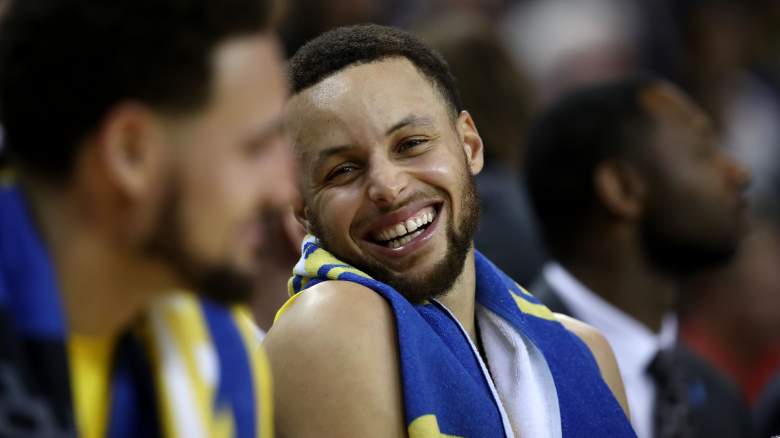 Steph Curry laughs on the bench during a game against the Denver Nuggets.

When Andre Iguodala watches Damian Lillard pulling up from near halfcourt or Trae Young breaking out a shimmy before hitting a three-pointer, he can’t help but think of his Golden State Warriors teammate.

Iguodala spoke out this week on the effect that Steph Curry has had on the game. While the way the two-time MVP has changed the game itself is undeniable — with players stretching the floor by shooting more, and longer, three-pointers — Iguodala said Curry has brought about some other different kinds of changes.

Appearing on The Breakfast Club, Iguodala said that the generation of players who came before him took a much harder approach to the game. Players who looked like they were having too much fun were seen as “soft,” while hard-nosed players like Charles Barkley, Anthony Mason, and Charles Oakley were looked at highly.

“It was a weakness if you smiling on the court. You had to be mean, like Pat Riley style basketball with New York,” said Iguodala, who rejoined the Warriors this offseason as a free agent.

“But when Steph Curry came through, he started laughing, he started shimmying and he’s shooting half-court,” Iguodala said. “Now you’re seeing this trickle-down effect, you see Trae Young, you see Dame Lillard, you see Luka Doncic. These dudes are shooting step-backs from half-court and everybody goes crazy. Kind of like, you can have joy now, you can laugh and you can play.”

Iguodala added that the joy Curry’s brought back to the game appears to be long-lasting, and he believes the Splash Brother should get as much credit for that as the changes he brought to offenses around the league.

“That’s like a real generational effect that comes from one dude and it’s something special,” he said. “Like I said, you got to give people their flowers while they’re here. He revolutionized the game.”

Still at the peak of his career, Curry’s brilliance on the court has earned plenty of praise as well. Last season, as Curry was turning in an MVP-caliber season that included 32 points per game on 42% three-point shooting, Warriors head coach Steve Kerr said that he was reminded of his most famous former teammate.

“He’s reminding me of MJ in that you just get so used to the brilliance and the excellence, it sort of blends in with everything else,” Kerr told ESPN’s Ramona Shelburne. “It just becomes routine. It’s insane to say that because what you’re watching is otherworldly, and yet you sort of begin to expect it. That’s probably the purest sign of greatness.”

Steph Curry is Top 10 All Time in:

If you take any of these lists and rearrange them by TS%, he’s 1st with a higher finals scoring average than Kareem Abdul Jabarr, Dirk Nowitzki, and Kobe Bryant. pic.twitter.com/dvrNSzxffL

Some of Jordan’s rivals feel the same way about Curry. Former New York Knicks center Patrick Ewing said that while Jordan brought the game above the rim, Curry took it out beyond the arc.

“Steph, like Michael, changed the game,” Ewing told NBC Sports Bay Area’s Chris Mullin. “You got guys shooting those deep shots and doing the things that he did. Michael changed it by all the dunking he was doing.”

READ NEXT: Steph Curry Gets Honest About His Long-Term Future With the Warriors

Raheem Sterling: Racist abuse not taken as seriously as other topics

Chance for Delhi to Bounce Back Against Struggling Mumbai Indians

Challenges and lessons learned caring for diverse, vulnerable populations in the ER