Golden State Warriors point guard Steph Curry has fallen in the MVP conversation following a tough mid-season shooting stretch, but he continues to produce a more positive impact when on the court than any other player in the NBA.

There are several ways to measure a player’s individual impact on a basketball game, and none of them are perfect. However, one of the most universal and easiest to understand methods is the plus-minus (PM) statistic. PM figures are tallied by adding up the number of points a team scores when the player in question is on the floor, then subtracting the number of points scored against that team across the same duration of time. The end figure is represented as either a positive or negative figure and provides a rudimentary gauge of a player’s on-court impact. 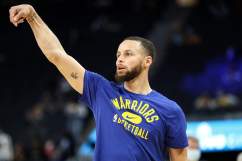 Tim Kawakami of The Athletic took to Twitter on Sunday, February 27 to lay out the best PM tallies in the NBA heading into the day’s games. Atop that list, which was littered with All Stars and MVP candidates, sat Curry with a PM total of +491.

No one else in the league was particularly close to the Dubs’ guard, with forward Jayson Tatum of the Boston Celtics coming in second place at +422, point guard Chris Paul of the Phoenix Suns ranking third at +419, and reigning MVP Nikola Jokic of the Denver Nuggets occupying the fifth spot at +379.

The only name on the list with whom casual NBA fans may not be incredibly familiar was Mikal Bridges, Paul’s teammate in Phoenix, who came in at fourth place with a PM tally of +416 for the year.

Getty/Katelyn MulcahyStephen Curry (left), of the Golden State Warriors, shows emotion with teammate Andrew Wiggins (right) during a game at Crpyto.com Arena against the LA Clippers.

The talent topping the PM list is proof enough in the veracity of the statistic, but when advanced metrics take the analysis even deeper Curry remains near the top of the league.

The primary flaw in the PM stat is that individual player ratings are significantly impacted by the play of their fellow teammates, potentially inflating one player’s impact while deflating another’s in rather ambiguous fashion. The real plus-minus statistic (RPM) attempts to address that concern by adjusting for the other nine players on the court at any given time, both teammates and opponents.

Stephen Ilardi published an explanation on RPM on ESPN.com in April of 2014, which reads as follows:

The RPM model sifts through more than 230,000 possessions each NBA season to tease apart the “real” plus-minus effects attributable to each player, employing techniques similar to those used by scientific researchers when they need to model the effects of numerous variables at the same time.

RPM estimates how many points each player adds or subtracts, on average, to his team’s net scoring margin for each 100 possessions played. The RPM model also yields separate ratings for the player’s impact on both ends of the court: offensive RPM (ORPM) and defensive RPM (DRPM).

Curry has remained outstanding this season when adjusting for the play of both his teammates and opponents. According to ESPN’s tally through February 27, Curry was second in the league with a total RPM of 9.88 per game behind only Jokic at 11.34. In third was Joel Embiid of the Philadelphia 76ers and coming in fourth was Giannis Antetokounmpo of the Milwaukee Bucks.

Those other three players are considered the frontrunners for league MVP this season, according to a straw poll of media members conducted by ESPN’s Tim Bontemps on February 17. Embiid finished first in that poll, followed narrowly by Jokic in second, and Antetokounmpo in third. Curry finished fourth in the MVP straw poll voting.

For reference, Tatum was fifth on ESPN’s advanced RPM list, while Paul finished fifth in the most recent MVP straw poll. Both players made the top five list of standard PM tallies noted in the Kawakami tweet above.

The Warriors were up 14 points headed into the fourth quarter, during which Luka Doncic and the Mavs outscored the home team by 20 points and went on to win by a score of 107-101. Curry put up 27 points, 10 assists, 4 rebounds and 2 steals without fellow Splash Brother Klay Thompson by his side, who was ruled out of the game due to a “general illness,” per Anthony Slater of The Athletic.

The Warriors fell to 43-18 on the season with the loss and continue to occupy the No. 2 seed in the Western Conference, six games behind the Suns and 1.5 games up on the third-place Memphis Grizzlies. Golden State will head next to Minnesota to take on the Timberwolves Tuesday, March 1.

The return of Gareth Bale; will he start against PSG?