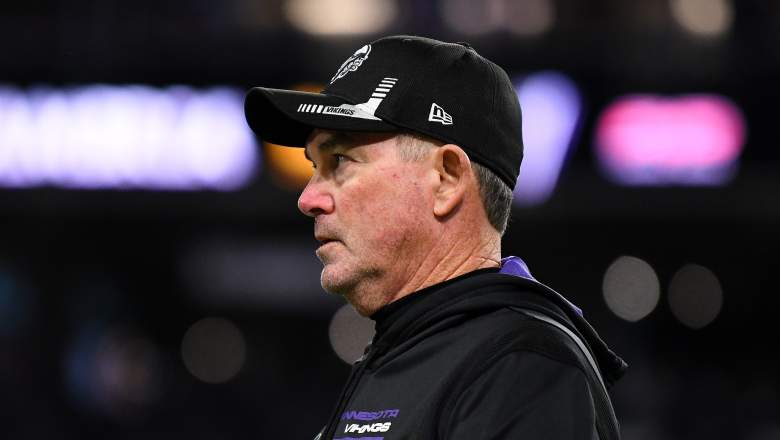 Star Tribune reporter Ben Goessling predicted an early-departure by Mike ZImmer if the team doesn’t turn their season around soon.

The clock is ticking on Mike Zimmer’s tenure with the Minnesota Vikings.

Numerous reports have found that the Vikings making the playoffs could have the final say on whether Zimmer finishes his contract with the team or is fired.

And unless the team has a miraculous turnaround and stops letting wins slip from its grasp, Zimmer is likely in his last year.

The Vikings are coming off another loss where the offense sputtered in the second half and let a 14-point lead slip in a 34-31 overtime loss to the Baltimore Ravens on Sunday.

Star Tribune reporter Ben Goessling speculated on the possibility Zimmer could be fired mid-season on the Purple Insider podcast and projected that it could happen this month.

‘I Think It’s Possible’ by Thanksgiving

On a “magic crystal ball” segment where Purple Insider host Matthew Coller offered a glimpse into the Vikings’ future and what would need to happen for that future to occur, Goessling had a premonition of his own.

“If I look into my crystal ball and I see (assistant coach) Andre Patterson coaching the Minnesota Vikings as the head coach. When am I looking to?” Coller asked.

“I think you could be looking as soon as later this month, possibly if they lose to Baltimore on Sunday,” Goessling replied last Thursday. “(If) they lose to the Chargers and then you would lose to the Packers at home, you are then 3-7, which effectively eliminates you (from playoff contention). It would have the added embarrassment that you just lost to your rival at home, which was the juncture that the Vikings decided they needed to fire Brad Childress in the middle of the season. It’s possible you’re looking that soon.”

Goessling’s mention of being eliminated from playoff contention has merit.

Earlier this season, CBS Sports Insider Jason La Canfora reported that the Vikings have pondered significant changes in the past and “seriously considered parting ways” with Zimmer even after the team’s 2019 playoff appearance.

“The Wilfs, who own the team, have pondered significant changes in the past, and seriously considered parting ways with head coach Mike Zimmer even after a playoff appearance two years ago, sources said. It is not lost on those within the organization how significant this season is to maintaining job security there,” La Canfora said. “(Ownership) conveyed to some associates their expectation that the club be a playoff factor this season to fend off major changes.”

The first domino fell in Goessling’s projection with the Ravens loss on Sunday. However, the way the Vikings lost on Sunday has become an ongoing pattern.

Starting the season 0-2, it felt like the Vikings were a handful of plays away from having their record reversed.

But as the schedule has rolled on it, the Vikings have shown to stoop to the level of their competition and have failed to put away games despite scoring on their first drive in each of their past six games.

Even in the Vikings’ triumphs over the Detriot Lions and Carolina Panthers, both won in walk-off fashion, they let their competition come back in the final two minutes of the fourth quarter.

This season has been embarrassing to the level of talent on the field, and embarrassment may be what it takes for the Wilf family to make a mid-season change.

Goessling added that the embarrassment that could come from losing to the Green Bay Packers could “be enough for the Wilfs to finally say this is enough.”

The Vikings are 2.5-point underdogs entering Week 10 against the Los Angeles Chargers and are likely underdogs to the NFC North-leading Packers. If they drop the next two games, that would produce four losses in a row, capped by a loss to their rival.

However, the Vikings’ talent is capable of competing with any team, which has made this season all the more frustrating.

Expect there to be more nail-biting finishes with the margin of error of making the playoffs razor-thin the rest of the way.

Discover more from Heavy on Vikings↓

Unlock the latest Minnesota Vikings news, rumors and exclusives — direct to your inbox. ↓

To bring joy back home, Nabi’s Afghanistan look up to cricket | Cricket News – Times of India

The Block: Stars reveal the REAL reason Ronnie and Georgia ‘disappeared’ from the finale

Lacey Chabert Is Starring in a Castle-Themed Christmas Movie