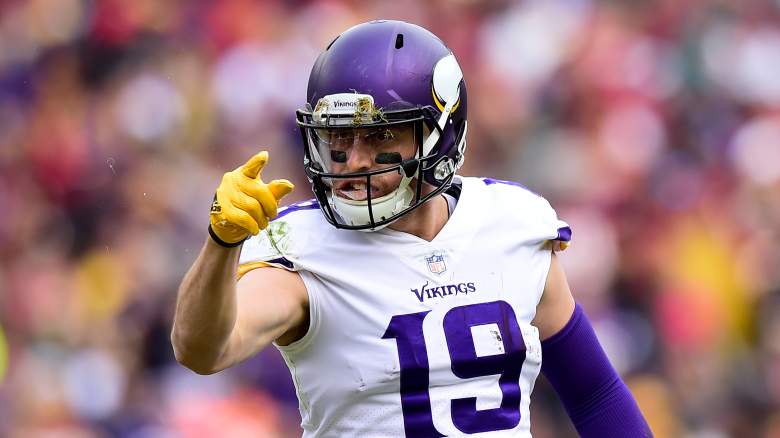 The Detroit Lakes, Minn., native, entering his ninth season with his home state team, caught his 400th career reception with the Vikings last Sunday — becoming the eighth player in franchise history to reach that mark.

Despite inking his name in the Vikings history books, Thielen is far from satisfied with his career.

“There’s bigger things out there,” Thielen said, per Vikings.com. When you’re in your ninth year, you just want to win. You don’t really care what it takes. Right now, I just want to win and I don’t care how that happens.

“There’s more history,” added Thielen, describing the good, not great history the Vikings have carried since their last Super Bowl appearance in 1977.

“I know what it’s like to be a Vikings fan. I know how bad these fans want it. I know how there hasn’t been a lot of success in getting there and finishing the job. That’s what makes me passionate about being a leader, passionate about coming to work every day and trying to help get us to win.”

Thielen Strikes Down ‘Season is Over’ Skeptics

The Vikings’ overtime loss to the Cincinnati Bengals last week cast a dark cloud over the fan base that has looked at the team’s next three games with doubts. The Vikings face the Arizona Cardinals on Sunday, Seattle Seahawks in Week 3 and Cleveland Browns to cap the season’s first four games.

The Bengals game was the only matchup the Vikings were considered preseason favorites. However, Thielen is not down after one game.

“It’s one loss. It means no different than a loss in Week 16, 17 or Week 8,” Thielen said in a Thursday press conference. “It kicks you in the butt and says, ‘better get your butt going. You better focus a little bit more. You better be a little more attentive to detail. Better be a little more prepared for that following week.’ It just shows you it doesn’t matter who you’re playing. You have to play well to win in this league.”

Thielen attested to the momentum that can build over a season. The 2017 NFC Championship entrant Vikings started the season 2-2 before winning 11 of their final 12 regular-season games.

Thielen surpassed Vikings Ring of Honor member Ahmad Rashad in career receptions and touchdowns after an impressive season-opening performance from the 31-year-old receiver.

Securing nine catches for 92 yards and two touchdowns against the Bengals, Thielen is seventh all-time in receptions (406) and sixth in career touchdowns (41).

Thielen is 11 touchdowns shy of tying Anthony Carter for third all-time in receiving touchdowns, which he could this season considering there’s an additional game.

He can surpass Jake Reed (413 career catches) for sixth all-time in receptions with eight catches on Sunday against the Cardinals.

Here’s a table of the Vikings’ top 20 receiving leaders:

Feel Very Fortunate Getting a Medal at the Paralympics: Krishna Nagar

Barcelona, Real Madrid transfer target may be heading to Chelsea

MSK Prasad: Mastermind’ MS Dhoni and Virat Kohli will do wonders for India at the T20 World Cup: | Cricket News – Times of...

Dan Campbell: Lions ‘Will Be Ready’ for All of Bears’ Quarterbacks

We Made it Tough Ourselves, Says Rishabh Pant as Delhi Capitals Beat CSK in a Last-over Thriller

Tiger Shroff, Vicky Kaushal or Sidharth Malhotra, who will play the lead in Rohit Shetty’s next cop drama in his OTT debut? – Times...

How to Please Shani Dev, The God of Justice