Undrafted Lakers Rookie Earning Preseason Praise: ‘A Lot of Dog in Him’ 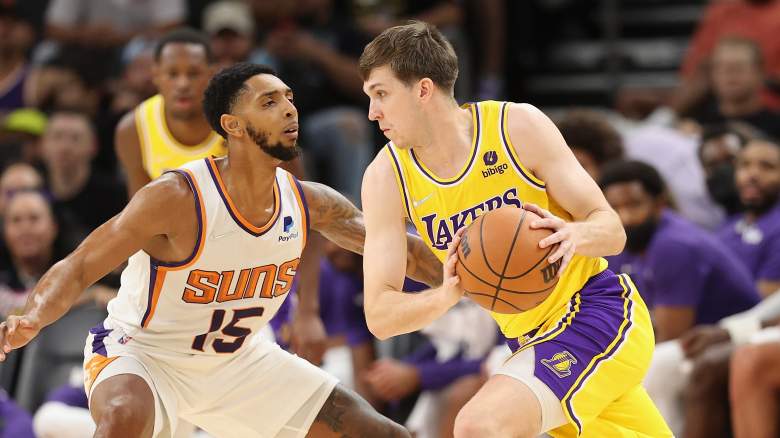 It’s not that Lakers rookie Austin Reaves has not played alongside NBA talent before. When he was at Wichita State for the first two years of his career, he did play with a future NBA’er—reserve guard Landry Shamet, now with the Suns.

It’s a long way up from Shamet to LeBron James, Russell Wesbtrook and Anthony Davis, but that’s where Reaves found himself on Tuesday night during the Lakers’ loss to the Warriors. Reaves played 27 minutes and scored 10 points on 3-for-6 shooting, including 2-for-4 shooting on 3-pointers.

It was the fourth straight solid game Reaves has posted in what has been an ugly preseason for the Lakers. After a shaky debut, he scored 10 points in the second preseason game and nine in Game 3. He added eight in the Lakers’ third game. Reaves is shooting 44.4% from the field in the preseason and 42.9% from the 3-point line.

“He’s an NBA player and he can play at this level, and play at a high level,” Lakers star LeBron James said of Reaves. “I watched a lot of film on him when we drafted him actually, and I knew right away that he could be an NBA player and play at this level. His size, his shot-making ability, his pick-and-roll play, his passing. … He’s a high-IQ kid, and he’s got a lot of dog in him, too.”

The Lakers, though, did not draft Reaves—no one did. That’s not unusual for a 23-year-old fifth-year senior, even after Reaves averaged 18.3 points per game for Oklahoma (he transferred from Wichita State two years ago) last season. One of the knocks on Reaves was his lack of 3-point accuracy, making only 27.7% of his 3s in two seasons with the Sooners.

But he impressed the Lakers with his toughness, and was signed to a two-way contract that would earn him a split spot with the team and its G-League affiliate. After James and the team’s other veterans watched Reaves during the Lakers’ player-organized Las Vegas minicamp, the team converted his two-year deal into a full guaranteed contract.

After Tuesday’s game, Reaves told Spectrum Sportsnet TV of the Lakers’ stars, “They make the game really easy for the guys, they’re known for pass-first basketball with Russ and LeBron. They really just make it easy and be in the right place at the right time and knock down shots because they’re going to get most of the attention on a nightly basis. So really just be ready to knock down open shots in the corner and just compete on the other end.”

Will the Lakers Have a Role for Reaves This Season?

Given the Lakers’ stacked roster, it is doubtful Reaves will play significant minutes this year, but he is laying the groundwork for a role should the team be hit with the injury bug—as well as a role in the future.

“I am asking a lot of questions,” Reaves said. “Like I said the other day, I ask Rondo something probably every five minutes so it is really just me trying to be a sponge and learning. I got beat on two or three back-cuts tonight and it is just situations like that, they’re trying to coach me up and teach me how to guard it.”

Rondo had an example.

“I mean today at shootaround he was asking about a situation where a guy is coming off a pin-down, does he top lock?” Rondo said. “And I was telling him that we don’t do that here, but it was a great question, obviously, coming from (a rookie). He’s got a great background as far as knowing the game.”

At this point, at least, he is getting a chance to show it.

Poignant Netflix film captures the many facets of Michael Schumacher

Stock futures are flat as investors remain cautious about September

Covid Has Created a Virtual Renaissance for Life Drawing