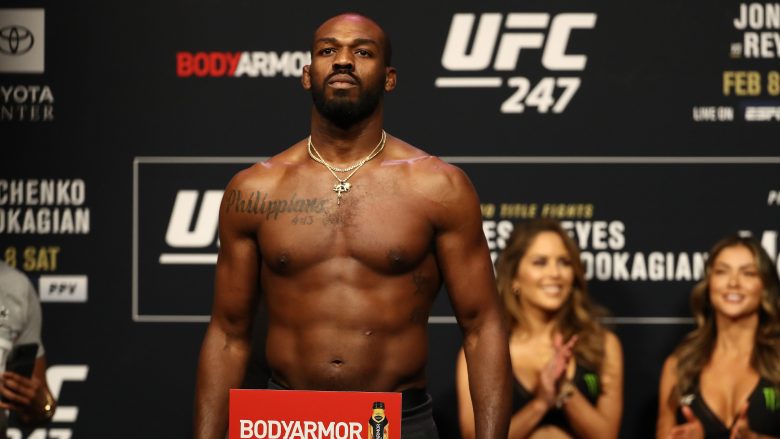 Jon Jones steps on the scale during the UFC 247 ceremonial weigh-in on February 7, 2020.

Former UFC light heavyweight champion Jon Jones has been out of action for well over a year and his fighting rivals are starting to forget about him.

In summer 2020, “Bones” vacated his 205-pound belt and announced his move to heavyweight. However, fans haven’t seen Jones back inside the Octagon since his reveal. And a few months ago, Jones said he was comfortable waiting until 2022 to make his debut north of 205 pounds.

Blachowicz fought Jones’ vacant title later in 2020 and won it by knocking out Dominick Reyes. “The Polish Power” has defended the belt once, defeating current UFC middleweight champion Israel Adesanya by unanimous decision in March 2021.

He is scheduled to make his second title defense, taking on Glover Teixeira at UFC 267 on October 30, 2021.

Blachowicz recently spoke with MMA Fighting and was asked about the former light heavyweight king. Jones and Blachowicz had been linked to a potential scrap a week after Jones’ title defense against Reyes at UFC 247 in February 2020, Bones’ last bout. The Polish Power knocked out Corey Anderson in the next UFC event, making a strong case to become the next title contender.

The fight never came together and Jones left the division.

Blachowicz made it clear that he doesn’t think about Jones and has moved on from the thought of a potential fight with him.

“I think Jon Jones, this conversation is over,” Blachowicz said via the outlet. “It’s not making sense to talk about him anymore. I don’t know. Maybe he don’t fight anymore, anywhere at heavyweight or light heavyweight, I don’t think so.

“I don’t know what he’ll do. I forgot about him. You remind me about Jon Jones right now.”

The latest UFC news straight to your inbox! Subscribe to the Heavy on UFC newsletter here!

READ NEXT: Champion Seeks Big Challenge: ‘Do What You Gotta Do’

RCB vs PBKS Head to Head record in IPL 2021: All You Need to Know

If You Can Deal With These 4 Frustrating Parts of Entrepreneurship, Becoming a Founder Might Be For You

Here’s What Customers Love, and Hate, the Most About Online Shopping