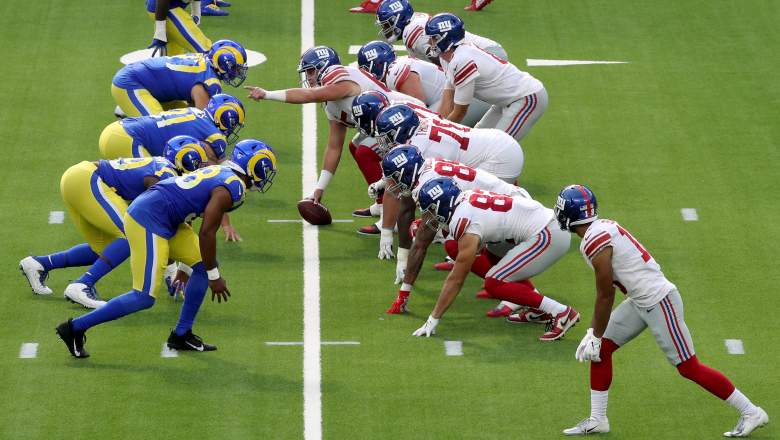 The Rams will face a Giants team on Sunday, October 17, with a 6-foot wide receiver who has breathed new life to their offense.

Just because Kenny Golladay won’t be in the New York Giants’ starting lineup on Sunday doesn’t mean the most explosive wide receiving option won’t see the field against the Los Angeles Rams.

That title belongs to Kadarius Toney of the Giants…and he’s the one dynamic wideout the Rams need to be on the lookout for during Sunday’s game at MetLife Stadium.

Toney was one of the injured Giants from the 44-20 loss to the Dallas Cowboys from Sunday, October 10. However, he is planning to practice on his injured ankle for Wednesday’s session according to CBS Sports.

And considering the Rams’ early woes against containing explosive plays especially against the pass, Toney could be in for a breakout afternoon in East Rutherford, New Jersey unless the Rams draw up a brilliant plan to slow him down.

Here’s how the 22-year-old Toney has fared this season:

Toney isn’t just someone who has added a much-needed speed element to the 1-4 Giants, but has the jets to slip between two defenders as seen here:

Kadarius Toney has rare instincts with the ball on his hands.

So few players know this move is where the space is going to be.

Get this guy the ball. Lots pic.twitter.com/yxLyBEXW6S

Here’s a sky view of that same catch — which resulted in Toney getting New York inside the Cowboys’ 5-yard line.

This play gets better and better every time I watch it — Kadarius Toney fools THREE defenders with his ability to catch and react opposite the flow of his body and defense, turns on the burners, and NEARLY takes it to the crib.

I was certain he was scoring on that #NYG pic.twitter.com/F2c82m03L8

And while the talk of the Cowboys’ defense focused on Trevon Diggs, Toney did get this personal victory on the talented Dallas cornerback: He created separation off this 2-step pivot move during man coverage:

Trevon Diggs trying to play press on Kadarius Toney was funny — Toney embarrasses him, twisting, turning, not a chance at stopping him.

The break of the route where he opens his hips and changes direction is the best separation creator I’ve seen this year from a NYG WR. pic.twitter.com/sAAevPc661

Oh, with that reported 4.39 40-yard dash speed, the Giants can plug him in as a wildcat QB, as seen below:

Would love to see a bit more Wild Cat Kadarius Toney in Week 6, get creative, unleash the playbook!

Love this play, when the ball is in Toney’s hands, good things happen. pic.twitter.com/4EKNwrTZ94

Toney is so shifty, he was once called “the human joystick” during his University of Florida days by his former college head coach Jim McElwain.

The Rams have surrendered six aerial touchdowns through five games. However, they’ve given up five TD passes in the last three games.

That includes the 39 and 23-yarder DK Metcalf had against the Rams on Thursday, October 7. Plus the 41-yarder A.J. Green scored in the Week 4 loss to the Cardinals.

More astonishing is this: Via Stathead, the Rams have allowed 11 completions of 25 yards or more in 2021. One year ago, the league’s best defense only surrendered 23 passing plays of that yardage mark or higher — giving them an average of just 1.4 passes per game in that category. This time, the Rams have allowed an average of 2.2 25+ passing plays.

Per PFF, six different Ram defenders have witnessed a 25 or 42-yard connection go up their side. This includes All-Pro CB Jalen Ramsey (25-yarder), slot CB David Long (was the targeted defender on the Green TD) and safety captain Jordan Fuller (42-yarder).

What can the Rams do to Contain Toney?

So how do the Rams control this “joystick” on the Giants?

I would say bracket him, but the Giants are most likely going to move around Toney to draw mismatches. Head coach Joe Judge will likely try to get Kenny Young on Toney, as the Rams inside linebacker is among the defenders who has struggled against the pass through Week 5. Via this chart from PFF, Toney has gained 105 of his yards in the short center of the field — which is the side Young mans.

Although, it’ll be fun to see Ramsey and Toney match speed on speed. I won’t rule out Raheem Morris placing Ramsey on him to test the rookie WR. Another likely scenario? Rams rookie Robert Rochell gets assigned to Toney, which becomes a battle of guys who ran a 4.3 before.

Regardless, Sunday presents an opportunity for the Rams to improve upon their pass defense lapses. Containing the “joystick” Toney is a great way to improve.

Neymar and Messi face off in epic Copa America final

Pension to Stop if you don’t Submit Life Certificate, How to Submit it Without Visiting Banks