Spanish teen Alcaraz upends No. 3 Tsitsipas in 5 at US Open 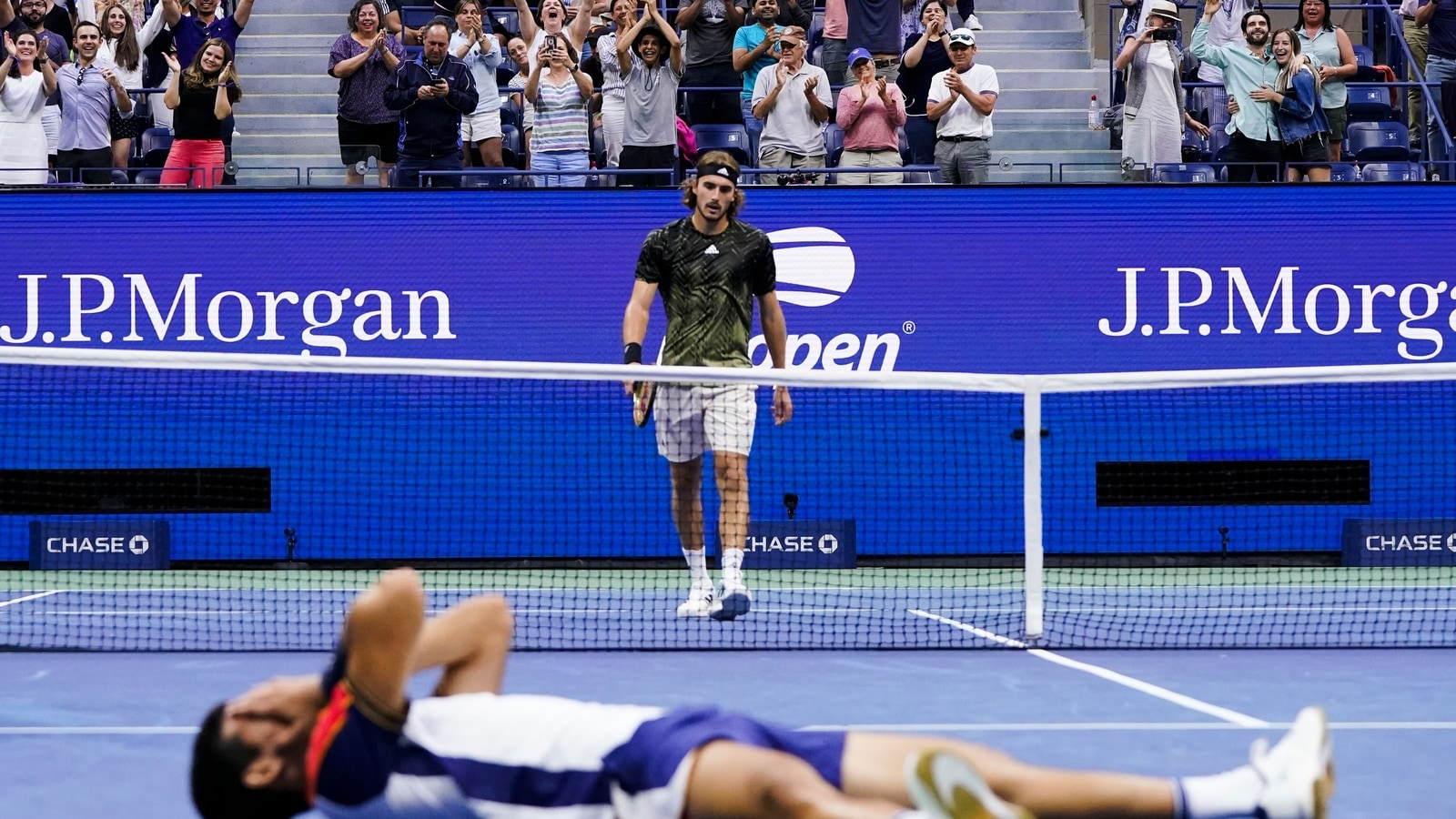 Until now, 18-year-old Carlos Alcaraz has exhibited enough promise and precociousness to make people think he eventually could succeed Rafael Nadal as Spain’s top tennis player. On Friday at the U.S. Open, with a dramatic five-set victory over No. 3 seed Stefanos Tsitsipas, Alcaraz showed why he’s been getting so much attention already.

With a tenacity to match his talent, and boosted by a rowdy Arthur Ashe Stadium crowd a tad tired of Tsitsipas’ penchant for taking lengthy breaks between sets, Alcaraz won 6-3, 4-6, 7-6 (2), 0-6, 7-6 (5) in just over four hours to become the youngest man in the fourth round at Flushing Meadows since a couple of guys named Pete Sampras and Michael Chang in 1989.

“I just don’t know what happened out there in the court,” the 55th-ranked Alcaraz said after what was only his 10th Grand Slam contest. “I can’t believe that I beat Stefanos Tsitsipas in an epic match. For me, it’s a dream come true.”

He made sure during his on-court interview to thank the fans, who are making up for last year’s absence — no spectators were allowed because of the coronavirus pandemic then, but it’s full capacity now — with plenty of noise. They chanted “Let’s go, Carlos!” They rose to their feet for ovations at various points, including right before the concluding tiebreaker, with Alcaraz waving his arms to request, and receive, even more support.

“He can be a contender for Grand Slam titles,” said Tsitsipas, the runner-up at the French Open this year. “He has the game to be there.”

Alcaraz showed off so many skills against Tsitsipas. Big cuts off both wings, so big that this was the assessment offered by Tsitsipas: “I’ve never seen someone hit the ball so hard.” And that was backed up by the stats, none more remarkable than the one showing that Alcaraz finished with 45 winners off forehands and backhands, compared with 14 for Tsitsipas.

There was more. So much more. A serve with some pop, reaching 134 mph. Returns that were too much to handle. And drop shots. So many drop shots, some of which claimed points outright, others of which laid the groundwork for a lob or a just-the-right-angle passing winner. Alcaraz even won one point with the help of a back-to-the-net, through-the-legs tweener.

As impressive as all of that may have been, nothing stood out about the kid as much as the mental strength required to hang in there in the crucible of a Grand Slam fifth set in the biggest arena in tennis against a top player. Especially after getting shut out in the fourth.

“He dealt with it really well,” Tsitsipas said.

And he meant everything: the scene, the setting, the stakes. Alcaraz had some fun along the way, too, interacting with the ticket-holders, pumping his fists, yelling “Vamos!” and, after some of his best shots, nodding confidently in the direction of his coach, 2003 French Open champion Juan Carlos Ferrero.

When it ended with Alcaraz smacking an inside-out forehand winner, he flung away his racket, dropped onto his back and covered his face with both hands.

“I had to be aggressive until the last point,” he said later. “I think I did.”

He stayed down for several moments, his chest heaving. After rising to go to the net, Alcaraz got a pat on the shoulder from Tsitsipas. Alcaraz then again put his palms over his eyes and squeezed his eyes shut.

This is the sort of triumph others have seen coming for him, and the milestones keep arriving.

He already was the youngest man to make two third-round runs at a major since Novak Djokovic in 2005. And the youngest to win at least one match at each Slam in a year since 1989, when that was done by Goran Ivanisevic, the 2001 Wimbledon champion who now is one of Djokovic’s coaches.

Now add this: Alcaraz is the youngest man to beat a top-three player at a Grand Slam tournament since the ATP computerized rankings started in 1973.

“It was supposed to be my match. Today was a match that I shouldn’t have lost,” said Tsitsipas, who had been the subject of criticism from first-round Andy Murray and others for taking what they thought was too long when heading off court for several minutes for an allowed toilet break.

This time, Tsitsipas did leave after the third set, but just for a few minutes (Alcaraz departed, too, and returned 30 seconds sooner). After the fourth, Alcaraz got treated on the sideline by a trainer who massaged his legs and lower back.

At the end of the fifth set, with the outcome in the balance, Alcaraz was better.

“You feel like you’re in control and it doesn’t really go your way at the end,” Tsitsipas said. “It’s kind of bitter, I would say.”

Top England players could boycott Ashes Down Under in view of strict bubble life: Report | Cricket News – Times of India

KS Bharat, Royal Challengers Bangalore Have the Last Laugh as They Beat Delhi Capitals by 7 Wickets

US Open day one: Andy Murray frustrated but Naomi Osaka all smiles

Domestic flights of GoAir, 3 other airlines to operate from Mumbai Airport Terminal 1 from Oct 20