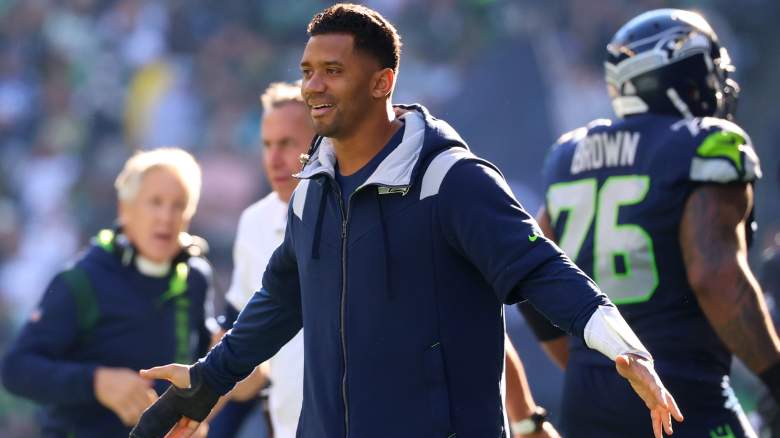 Russell Wilson and Odell Beckham Jr. could be teammates in Seattle.

Russell Wilson wants a new weapon to throw to in Seattle.

According to a report by USA Today’s Mike Jones, the Seattle Seahawks quarterback is urging the franchise to make a move for Odell Beckham Jr. following the Cleveland Browns‘ decision to waive the 29-year-old receiver.

“The Seahawks have shown strong interest in acquiring the wide receiver, the person said. Quarterback Russell Wilson has urged Seahawks brass for a Beckham signing, and in recent days, team officials have done extensive research on the wideout,” said Jones.

“Beckham would prefer to play for a contender, and alongside a veteran quarterback,” Jones continued.

Other notable teams linked to Beckham — the San Francisco 49ers and New Orleans Saints, for example — are 12th and 23rd in the waiver order.

In other words, the Seahawks have an advantage over other playoff-caliber teams due to their slow start to the season.

With Wilson possibly making his return from a finger injury in Week 10, the addition of Beckham could potentially provide a much-needed spark for a Seahawks team currently just a game back of the final wild card spot in the NFC.

The Seahawks already possess one of the best one-two punches at the wide receiver position with both D.K. Metcalf and Tyler Lockett in the fold. Both players are projected for over 1,200 receiving yards this season.

However, Seattle is extremely thin at the wide receiver and tight end positions after Metcalf and Lockett. Slot receiver Freddie Swain has just 16 receptions for 169 yards and two touchdowns while starting tight end Gerald Everett has just 14 catches for 135 yards and a touchdown.

The addition of Beckham would give the Seahawks one of the best receiving cores in the NFL. It’s one that might even parallel the Tampa Bay Buccaneers’ three-headed trio of Mike Evans, Chris Godwin and Antonio Brown.

Wilson Aiming to Return in Week 10 Versus Packers

With Wilson eligible to come off of injured reserve for the Seahawks’ Week 10 matchup versus the Green Bay Packers, the franchise quarterback looks to be on track to return.

Wilson had the pin removed from his surgically-repaired right middle finger recently and shared some clips of him throwing the ball on Wednesday, November 3.

While head coach Pete Carroll did not officially declare that Wilson will be back for Week 10, he did say that his starting quarterback is “really close” to a return on Monday, November 1.

“We’ll hold out hope that he’s going to continue to bring this thing back and break the records of all-time (in) how (fast you can recover) from this,” Carroll said. “If anybody can do it, Russell can do it.”

If Wilson returns against the Packers on Nov. 14, it will be five weeks since he suffered the injury on Oct. 7 against the Los Angeles Rams. His original timetable called for the injury to be a six-to-eight week recovery period.

While the Seahawks have been competitive with Geno Smith at quarterback, the team’s best chance at salvaging this season is with Wilson at quarterback.

If the Seahawks can get Wilson back from injury and acquire Beckham Jr. in the same week, it could lead to a quick turnaround to the season.

Discover more from Heavy on Seahawks↓

Unlock the latest Seattle Seahawks news, rumors and exclusives — direct to your inbox. ↓

Rana Daggubati to Be The Face of WWE Campaign in Tamil, Telugu

Osaka advances while Tsitsipas escapes Murray at US Open

Louis Oosthuizen takes slender lead into final round at The Open

Catching up on 15 years of Google Trends