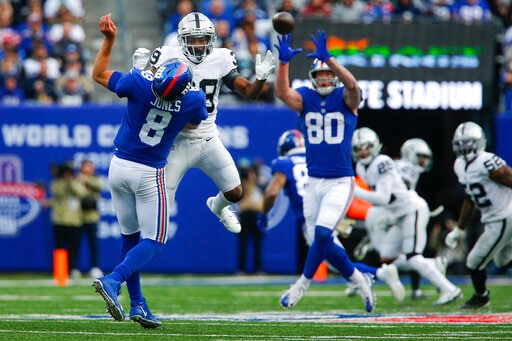 EAST RUTHERFORD, N.J.: The Las Vegas Raiders lost another game coming out of a bye week. This was far removed from a normal bye week, though.

While preparing to face the New York Giants, Las Vegas was confronted with the tragedy of a fatal car crash involving a teammate.

Receiver Henry Ruggs III was arrested for a crash that claimed the life of a woman and her dog Tuesday night. He was released hours later by the team.

It might have been one of the reasons the high-powered Raiders looked a little out of it on Sunday in dropping a 23-16 decision to the Giants.

Gruden resigned after it was revealed that he wrote homophobic and misogynistic emails between 2011 and 2018.

While their emotions might have been in check, the Raiders didn’t look right, especially on offense. They settled for three short field goals and Daniel Carlson missed another from 25 yards.

Derek Carr was intercepted twice by second-year safety Xavier McKinney, with the first one being returned 41 yards for a go-ahead touchdown on the third offensive play of the third quarter. The quarterback, who 31 of 34 in the week before the bye, also missed a wide-open Darren Waller for a TD just before halftime. He lost a fumble after being sacked deep in New York territory in the final minute.

I thought mentally we were ready, Carr said. Myself, I was ready to go. I was excited just to play football. I dont think emotions or anything like that were into it. The second interception had nothing to do with emotion. That was a decision I made. It didnt work out.

Carr also downplayed the bye-week problems that have seen the Raiders lose 16 of their last 19 games after a week off.

I dont know, Carr said. It was our first one with this team. I thought we played well. We just turned the ball over.

Defensive end Yannick Ngakoue, who had two of the Raiders’ three sacks, said each player has dealt with with this week’s tragedy differently.

It was a lot of emotional weight on me, but I felt like I did a good job of coming into this game ready to play,” said Ngakoue, who has multiple sacks in three of his last four games. Different guys may have reacted differently individually, but I feel like with the practice we had this week, I feel like guys were focused on the game and came in with a solid mindset.

The Raiders released Ruggs hours after he slammed his car into another vehicle, creating an inferno that killed a woman and her dog.

Its just a tragedy, it was very sad, receiver Hunter Renfrow said. You know, it was a tough week. But we got to come out and play better than we did. And I think as we go forward is going to make us tighter. A lot of adversity this season, but I think just getting better every day is going to be the key to it.

Juventus turmoil: Raided by police and struggling in Serie A

Why Did Gates McFadden Leave ‘Star Trek: The Next Generation’ Then Come Back?