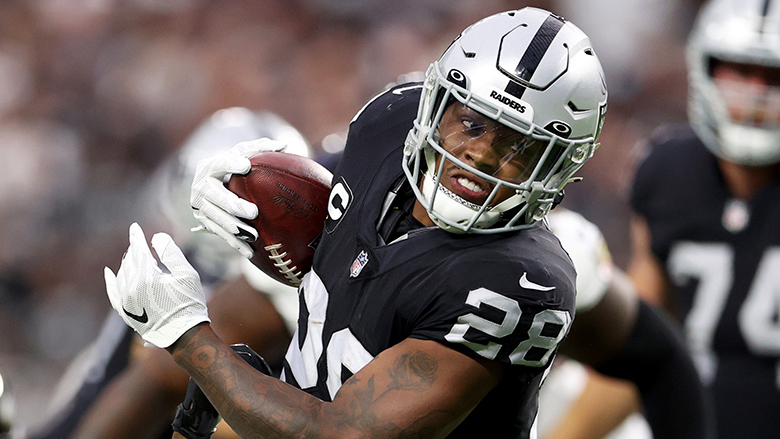 During Week 1’s game against the Baltimore Ravens, it was clear that Josh Jacobs wasn’t 100%. He was commonly seen wincing in pain and limping off the field. Despite that, he toughed it out for the Las Vegas Raiders and even scored a key touchdown.

Injuries have become a common theme regarding Jacobs. He’s missed four games in two seasons and is set to miss Sunday’s game against the Pittsburgh Steelers. That’s not even taken into account all the injuries he’s played through. He’s as tough as they come but his body is clearly having a difficult time dealing with the rigors of the NFL.

Fans can be a brutal bunch and many are writing off Jacobs as an injury-prone player who can’t stay on the field. A day after the news dropped that he wasn’t playing on Sunday, Jacobs posted a cryptic tweet just featuring an emoji of a pencil writing on paper.

Based on this tweet, it seems that the running back is taking notes of what people are saying about him and his injury issues. Hopefully, it’s only a minor setback as he’s worked hard this offseason and is one of the best running backs in the NFL when healthy.

The Raiders have been in this position before, which is why they signed Kenyan Drake this offseason. The veteran running back in 37 games in his career and is more than capable of being the bell cow while Jacobs gets healthy. However, head coach Jon Gruden seems to think that third-stringer Peyton Barber will be playing a big role on Sunday.

“We really like Barber. We think he’s a heck of a back,” Gruden said Friday. “I like the way he runs and catches and picks up blitzes. We’re excited about this opportunity to see what we have.”

Barber was only signed by the Raiders shortly before Week 1 but he’s a tested veteran. He’s started in 30 career games and has rushed for 2,245 yards. Drake will get a lot of usage but don’t be surprised if we see a lot of Barber against the Steelers.

Raiders Starting to Worry About Jacobs?

Jacobs’ injury issues are a reminder of why teams don’t typically use first-round draft picks on running backs anymore. It’s become all too common in the NFL. Jacobs is in his third season and the Raiders can keep him under contract for two more years after this season. The Atheltic’s Vic Tafur believes that his durability issues could be a factor in a possible extension:

No one questions Jacobs’ toughness, but the Raiders will have to consider his durability and apparent inability to be 100 percent when it comes time to extend his contract in the next two years. (He has this season and next remaining on his rookie contract, plus the Raiders have the ability to pick up his fifth-year option.) Jacobs has run for more than 1,000 yards in each of his first two seasons, but his yards per carry dropped from 4.8 as a rookie to 3.9 last season. On Monday, he had 34 yards on 10 carries (3.4 average).

The Raiders obviously love Jacobs when he’s healthy. He’s a very good running back when he’s on the field. However, Las Vegas will have to think long and hard before they give him a big payday in the near future.

Barcelona, Real Madrid transfer target may be heading to Chelsea

3 Questions to Ask Yourself Before Selling Your Business