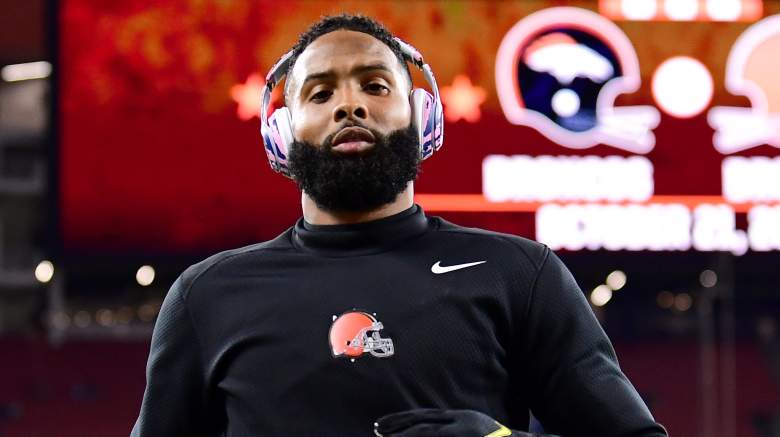 The trade deadline is approaching and a “dream” scenario has been laid out for the Cleveland Browns that sends Odell Beckham Jr. to the Detroit Lions.

The trade, proposed by Conor Orr of Sports Illustrated, sends Beckham to the 0-7 Lions for a pair of third-round picks. With Andrew Berry and the Browns front office having lots of success through the draft, those would be valuable chips for Cleveland to bring back. Here’s what SI had to say about the hypothetical trade:

The Browns love long-term thinking and have some talent on the roster, including Donovan Peoples-Jones who, while not a one-for-one replacement of Beckham’s skill set, is more of a conservative fit for Cleveland’s run-first offense. Meanwhile, Beckham would arrive as an ambassador for the Lions’ next quarterback.

While moving Beckham and getting something back in return at this point seems logical at this point in his career with production waning, there are also key reasons why the Browns would shy away from moving the polarizing pass-catcher. Premier among those is that if Beckham can get his body right, he can be an asset to the Browns as they eye a run at a title. Berry and Co. have also refused to sell low on players — like TE David Njoku — and it’s unknown what kind of value the Browns could be looking for in return. Insiders expect Beckham and the Browns to part ways in 2022.

There’s also the fact that Beckham has $9.7 million left on his deal for 2021 and not many teams would be willing — or able — to take on that salary for a receiver who hasn’t proved to be a difference-maker of late.

It’s been a tough season for the Browns on the injury front but the team will have both Beckham and Jarvis Landry on the field this week against the Steelers. Landry had a new knee injury pop up this week but he’s expected to be a full-go for the AFC North rivlary.

“We are really looking forward to having Jarvis and Odell work together on the field. They bring so much to the offense,” pass game coordinator/wide receivers coach Chad O’Shea told reporters this week. “They are such an important part of what we do offensively. I know they feed off of each other energy-wise in a positive way, which is great. We want both of those guys out there to try to help our team. When they are out there together, we are a better team. Look forward to getting them both out there together.”

Both have missed time this season — Beckham early in the season as he continued recovery from a torn ACL suffered last season and Landry with the knee that forced him to miss four games. The duo has combined for just 27 catches for 343 yards.

The Browns will rely even more on Landry and Beckham with second-year receiver Donovan Peoples-Jones out with a groin injury. There were high expectations for Peoples-Jones after he emerged late last season. He has notched 13 catches for 228 yards and a pair of touchdowns this season, including his first 100-yard game in a loss to the Cardinals.

On top of that, quarterback Baker Mayfield is dealing with a serious shoulder injury, although he’s expected to be a go against the Steelers after missing last week. His toughness has earned him even more credibility in the Browns locker room.

“We all have injuries that we go through and have to play through. When the season starts, no one is actually ever still 100 percent,” Landry told reporters. “He is handling it like a pro, and obviously, he is not putting himself selfishly in front of the team. He is going day by day and seeing the things he can do, coming out here on the practice field and doing the things in the training to be able to see if he can really give it a go. We just go from there.”

The Browns are a four-point home favorite against Pittsburgh.

Discover more from Heavy on Browns↓

Unlock the latest Cleveland Browns news, rumors and exclusives — direct to your inbox. ↓

Cristiano Ronaldo slams Messi over GOAT debate, ‘He doesn’t look like this’

Covid has wiped more than a year off life expectancy of men in England and Wales, report says

Predicting how Norwich vs Liverpool will play out tonight

Transferred Money to Wrong Bank Account by Mistake? Steps to Know to Get it Back