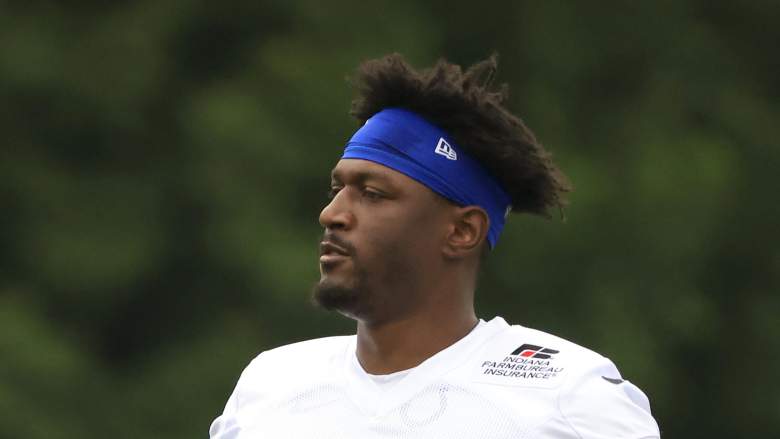 The New England Patriots suddenly have depth issues at running back and Indianapolis Colts’ former 1,000-yard rusher Marlon Mack has asked his team to trade him.

There are multiple teams in need of running back depth. The Patriots have been linked to Mack via speculation from a variety of outlets.

The Mack-to-Patriots talk makes too much sense, which obviously doesn’t ensure anything will happen. If you’ve followed the Patriots for a long time you know there are more of these “sensible” deals that don’t get made than come to fruition.

The Boston Globe’s Ben Volin was one of the first to suggest the Patriots contact the Colts about Mack:

Jerry Trotta of MusketFire.com loves the idea of the Patriots going after Mack. He talked about the Colts seemingly auditioning Mack earlier this season to raise his value. Trotta wrote:

With Jonathan Taylor emerging as a superstar at the position, Mack requested a trade from the Colts last week. We get the idea that Indy would like to do right by Mack, whom they drafted in the fourth round back in 2017, so he could be available at a discount given he’s coming off a devastating Achilles injury. The Colts have played a dangerous game by giving Mack carries over the last two weeks, seemingly trying to show teams that he’s fully recovered from the injury. However, it might end up working out for them, as Mack looked like the punishing runner fans grew accustomed to watching on Sundays before the injury. In Monday night’s overtime loss to Baltimore, Mack took five carries for 42 yards, giving him 85 yards over 20 carries (4.3 YPC) for the season.

Mack isn’t Derrick Henry, but based on what we’re seeing from the Patriots’ running back through the first five games of the season, he could help spark the ground game. He’s also set to be a free agent at the end of the season, so acquiring him wouldn’t require a long-term financial commitment.

Here is a Closer Look at the Patriots’ Running Back Situation

Damien Harris isn’t healthy enough to play in Week 6 vs. the Dallas Cowboys, and he’s had ball-security issues this season with two crucial fumbles inside the 20-yard line. Rookie Rhamondre Stevenson was banished to the bench after a huge Week 1 fumble and poor performance in pass-blocking situations.

J.J. Taylor has also put the ball on the ground, despite being generally undersized at 5’6″. Those issues are complicated by the season-ending injury suffered by veteran James White and the trade of Sony Michel. With that as the scene in the team’s running back room, it’s easy to see why the Patriots are being mentioned in conjunction with some potentially available players at the position.

We’ll see if the Patriots make a call to inquire about Mack or if they elect to give Stevenson another chance to fill the role left by Michel, and if Taylor can adequately fill in for White. Both have some tough shoes to fill.

Cricket Australia Confident Ashes Can Go Ahead as Planned

Ben Affleck’s quote on parenting that stirred a controversy

What Will Become Of Cash-Strapped China Evergrande?