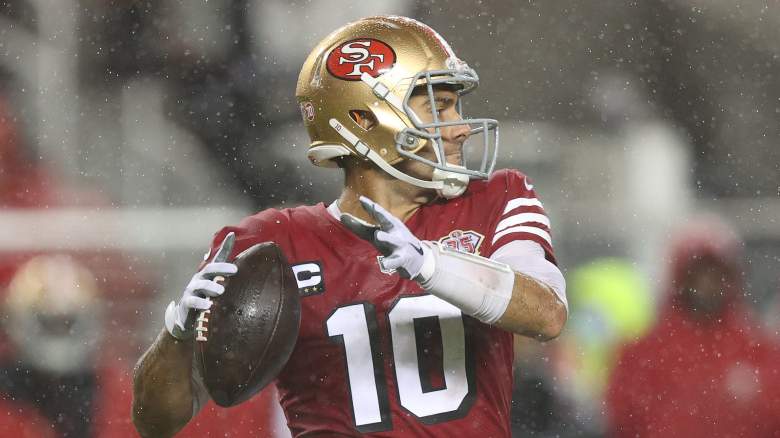 According to a recent report from NFL Draft specialist Matt Miller, who cited author and ESPN analyst Seth Wickersham, the New England Patriots tried to reunite with Jimmy Garoppolo this offseason.

According to Miller’s tweet, the Patriots offered a second-round pick, but the San Francisco 49ers turned it down.

In @SethWickersham’s book, he reports that the Patriots called the 49ers asking about Jimmy Garoppolo’s trade value on Day 1 of the draft. New England reportedly offered a 2nd; San Francisco wanted a 1st

At this point, the Patriots are probably pleased as punch the Niners drove a hard bargain while Kyle Shanahan and Co. are wishing they could have a do-over.

Jimmy Garoppolo Has Been Less Than Stellar

First and foremost, Garoppolo’s play has been subpar this season. He has completed 64.8% of his passes for just 1,106 yards in 5 games. Garoppolo has tossed 6 TD passes and 4 interceptions.

Granted, he was hobbled by an injured calf that saw him miss a game and he’s been without his favorite target tight end George Kittle, but there is no question the Niners were expecting more from the 29-year-old veteran.

We don’t know what kind of season Garoppolo might have had if he had landed back with the Patriots, but if we take his 2021 stats for face value, and compare them to rookie Mac Jones, it’s clear New England has the better player.

The Niners reportedly wanted to draft Jones with the No. 3 overall pick.

ESPN’s Adam Schefter detailed the Niners’ attempt to block the Patriots from drafting Mac Jones in the Top-5. Schefter wrote:

One of the many reasons San Francisco traded up to the third overall spot in this year’s NFL draft was their belief that the New England Patriots could trade up to No. 3 and beat them to Alabama quarterback Mac Jones, league sources told ESPN…This belief contributed to the Niners completing the late-March trade that sent three first-round draft picks to the Miami Dolphins to move up to the No. 3 spot, which gave them the opportunity to draft Jones or any other quarterback they deemed worthy in that slot. San Francisco ultimately decided Trey Lance was its preferred quarterback, and Jones wound up with New England at the 15th pick anyway — without the Patriots having to surrender any additional compensation.

If the Niners had simply taken the reported trade offer they received from Bill Belichick and sent Garoppolo back to New England, we might be seeing a massive swing for both teams. The Niners would have their franchise QB, and that’s no disrespect to Lance who still may be a great player, but Jones has been sharp. San Francisco would also have had an additional second-round pick, which could have been an impact player. They would be set up for success.

Meanwhile, New England would have Garoppolo at quarterback and would have had one less pick in the 2021 NFL Draft. Belichick dodged a bullet.

Brazil GP: Lewis Hamilton Disqualified from Friday’s Qualifying Session, to Start Sprint from Back of Grid

I’ll get a tattoo if we win the Ryder Cup, says Padraig Harrington

Ronald Koeman Under Direct Attack for No ‘Tiki Taka’ at Barcelona

As Forest Whitaker enjoys Wales, these are the places to put on your bucket list

BILLY CONNOLLY: ‘The crazy night in Saint Lucia I could have killed Michael Caine’