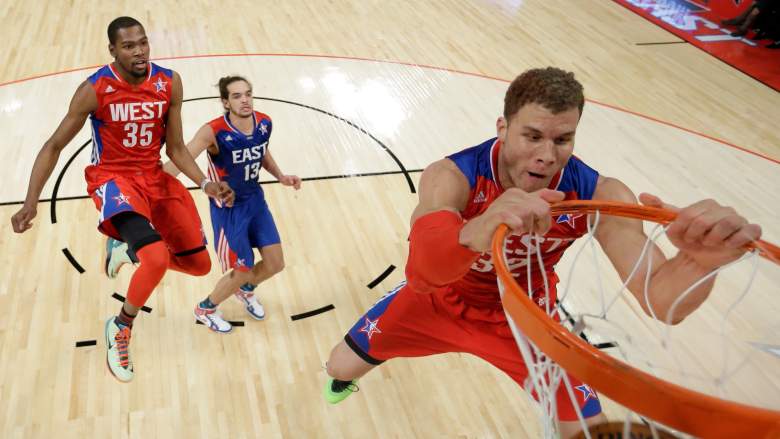 Kevin Durant and Blake Griffin during the 2013 NBA All-Star Game.

Brooklyn Nets superstar James Harden has struggled this season. He was averaging 17.7 points per game on 39% shooting from the field through the first nine games. But Sunday’s matchup against the Toronto Raptors may prove to be a turning point for the Nets guard.

The latest Nets news straight to your inbox! Join the Heavy on Nets newsletter here!

Griffin, Durant Spoke With Harden at Halftime of Raptors Game

Harden had his best game of the season against the Raptors, scoring 28 points, and almost notching a triple-double with 8 assists and 10 rebounds. 16 of his points were scored in the final quarter, where he came up with two clutch three-pointers to seal the 116-103 victory for Brooklyn. Nets big man Blake Griffin says that he and Kevin Durant have been imploring the Nets’ star to stay aggressive.

“We talked about it at halftime. Kevin [Durant] talked to him about it: Just be aggressive. Let his aggressiveness going to the basket be the way he facilitates,” Blake Griffin said per Brian Lewis of the “New York Post.”

“Sometimes he was like trying to facilitate a little too much too early. Which is never a bad thing, and he was getting us good shots. But when he’s aggressive, the defensive focus has to shift. He’s finding a great balance lately.”

Ever since his move to the Nets last year, Harden has taken on a facilitating role, deviating from his shot-creating style of play. Head coach Steve Nash wants Harden to start attacking more.

“I thought in the first half he didn’t give himself enough credit,” Nash said per the “New York Post.” “He had opportunities to attack more, and I tried to implore him to go and to be aggressive. In the second half, he was excellent. This game, the Atlanta game, games where he gets to the paint, he can really cause a lot of problems for the defense.”

Durant Sounds off About His Return to Toronto

Harden was not the only Nets player to have a stellar performance on Sunday. Durant had 31 points of his own, going 61% percent from the field along with 7 assists and 7 rebounds. Through just 10 games, the Slim Reaper has had a career-high performance in almost every category, including the most efficient year of his tenure in the NBA.

The win was also very meaningful for the frontrunner for this year’s MVP award in a different way. In 2019, Durant suffered an Achilles injury during the NBA Finals while still playing for the Golden State Warriors. The injury forced him to sit out for the entirety of the 2019-20 season. In the 2020-21 season, the Raptors played in the Amalie Arena in Tampa Bay, Florida. Making Sunday’s match up the first time KD has played in the Scotia Bank Arena since his injury.

“The last time I was here was one of my lowest moments as a basketball player, but it’s good to come back here, play, see the fans and get a W,” Durant said after the win per SNY.

“The last time I was here was one of my lowest moments as a basketball player, but it’s good to come back here, play, see the fans and get a W” – Kevin Durant pic.twitter.com/He8W6bCJpv

Nash Gets Deep About His Return to Canada

For the Nets, the win against the Raptors was a big one, snapping a 10-game losing streak in Toronto. But for head coach Steve Nash the win in his home country was a humbling experience.

“That means a lot. This is a very special place for me,” Nash said in a postgame interview per SNY.

“Obviously Canada but Toronto, I’ve spent so much of my time here. I have so many close friends and relationships and memories in this city. I have a lot of admiration for the Raptors’ organization and [Toronto coach] Nick Nurse, so to get a win here is special for me. I think this is a really tough team here in Toronto and have great fans. Great place to play. For me, this is definitely a sweet one.”

If the Nets hope to make a deep playoff run they will need Harden to remain aggressive the way he was against the Raptors. All season long.

Cristiano Ronaldo Took a Pay Cut to be Back at Manchester United: Know How Much He Earns

Shreyas Iyer Likely To Part Ways With Delhi Capitals Ahead of IPL 2022: Reports

Beheadings, Betrayals, and a Baby — Hilariously Bawdy Show ‘The Great’ Is Back

Ancient marsupial ‘junk DNA’ might be useful after all, scientists say