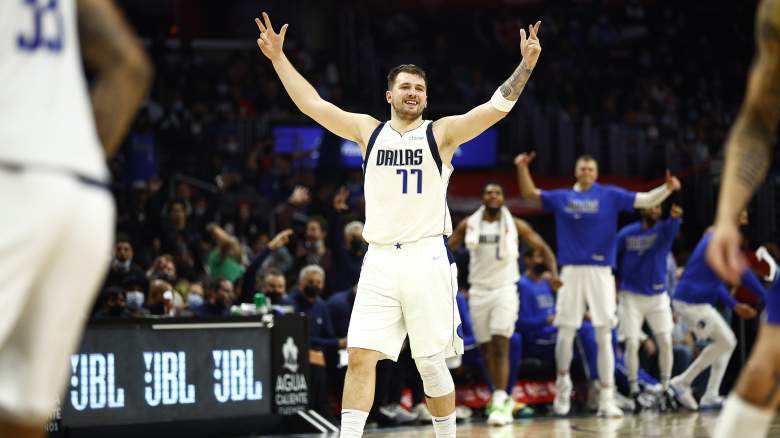 Luka Doncic celebrates during a huge win over the LA Clippers.

In a huge overtime win over the LA Clippers, Luka Doncic made his return for the Dallas Mavericks in what was their first signature win of the season. With their superstar back in the lineup, the team got back on track and could use the win as the first step in getting the season back on track.

Prior to this victory, the Mavs had lost three consecutive contests. After a long four-game road trip to the West Coast, the team will now head back to Dallas for five home games in their next six contests.

Signature wins like this can often be what get NBA teams going throughout the flow of the regular season. With Doncic back in action and a handful of upcoming games at the American Airlines Center, this overtime win could be looked back at as the game that got the Mavericks going.

The 11-point deficit that Dallas overcame was their sixth win of the season in which they came back from down ten or more points to pull out a victory. This one felt even more special than the other five given the circumstances and who they played. The Clippers have knocked the Mavericks out of the playoffs in each of the last two seasons, with tension always running high between the two teams.

This was certainly a huge victory for the Mavericks in terms of Western Conference standings, but could mean much more in the long run as a signature win.

The Mavericks will only go as far as Doncic can take them this season. As one of the best players in the league, Dallas’ ceiling is fully dependent on his health and the ability to take the floor each night.

This became even more clear as the team went 0-3 in his absence over the past week.

In his return to action, the 22-year-old finished with 26 points, nine rebounds and nine assists. This  extended his 20-5-5 streak to a 2021-22 NBA-best seven consecutive games.

Doncic generates a ton of points for the Mavs, whether it’s him directly scoring, generating open looks for teammates, or simply forcing defenses to put extra emphasis on him defensively which opens up looks for those around him.

“Honestly it’s just easy opportunities because of Luka,” said Kristaps Porzingis following the overtime win. “When Luka’s out there, he just makes the game so much easier for everybody else.”

Doncic admitted after the game that he’s still getting back into game shape after being out for a week.

“I was tired. Overtime in your first game back? That was tough. We got a win, so that’s all that matters. I was happy,” said Doncic.

He had a lot of help on Tuesday night, as his sidekick in Porzingis had another great offensive showing. The 7-footer finished with a a team-high 30 points (10-for-ten from the free throw line) to go along with seven boards.

When both of these players are healthy, the Mavs have been really good this season. In fact, they’re 7-2 when both Doncic and Porzingis take the floor.

The Mavericks held the Clippers to just one single point in the overtime period. This marks just the second time in franchise history that the Mavs have held their opponent to one point or fewer in overtime.

Even before the extra five minutes, Dallas played really solid defense. Holding a good team to 104 points in 53 minutes is no easy task.

This win showed the defensive potential of this team, and should give them a ton of confidence moving forward as a building block game. Dorian Finney-Smith was spectacular on that end of the floor, with three steals on the night.

While this one win was extremely important in the moment, it could ultimately end up being much more important long-term. These types of victories are key for momentum and confidence for a team that has been up and down all season.

England vs Hungary may be ‘pivotal’, Gareth Southgate claims

Could coffee boost your cycling? Scientists explain how it super-charges performance