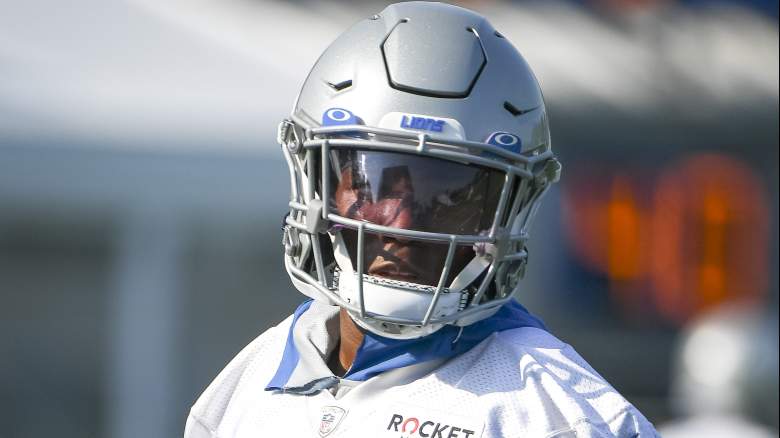 Ifeatu Melifonwu on the field during Lions training camp in July 2021.

The Detroit Lions have been thinking about how to account for the loss of Jeff Okudah for a few days, and one of the best answers might be for the team to turn to a rookie in order to bridge the gap for their backfield.

Rookie cornerback Ifeatu Melifonwu seems ready for the challenge, even if he hasn’t seen much football early in his career. Melifonwu played in Week 1, but only sparingly. Now, the team could call on him under the bright lights of Monday Night Football to play a major role.

The latest Lions news straight to your inbox! Join the Heavy on Lions newsletter here!

Speaking with the media this week on Wednesday, September 15 in an interview posted to DetroitLions.com, Melifonwu was asked about the Packers, and specifically, stud wideout Davante Adams. As he said, he is impressed with what Adams has done in his career, and the pairing of him with Aaron Rodgers is a tough one.

With all of that in mind, should it be considered a tough challenge that Melifonwu is worried about to go against Adams during just his second NFL game?

“It’s not daunting, it’s exciting. It’s just a chance to prove yourself, that’s really what it is,” Melifonwu said. “That’s just rooted in self, it’s rooted in my coaches and my teammates. I feel like we all have the same mentality. We’re all excited not just on Davante, just to go against Green Bay. It’s not that I am just excited to go against him, I’m excited to play.”

Atmosphere isn’t going to matter to Melifonwu, either, considering a national television audience and the bright lights of a night game.

That’s a good place for Melifonwu to be mentally as he looks forward toward a big challenge in Week 2.

Ifeatu Melifonwu Called ‘Next Guy Up’ By Dan Campbell

Speaking with the media on Monday, September 13, Campbell raved about Melifonwu after being asked about him specifically, and admitted the team has confidence in him after a solid camp period as well as lead into the season. As a result, he could have earned a look for the Lions as it relates to how to replace Okudah.

“He’s been working hard, and he quietly has really improved. He’s another guy from spring who’s quietly had a good spring and a good camp. So there’s a good chance he’s probably the next guy up,” Campbell explained. “We’ve got two other guys in Bobby Price and (Jerry) Jacobs. So we’re going to put the best combination out there and see where we go and listen, it’s next man up. We’ve said it from day one. It doesn’t matter who’s in there, all that matters is who’s in there does what they’re asked to do and does it the very best that they can do it.”

Specifically, Campbell admitted that he has plenty of faith in the younger players that he referenced stepping up, no matter who they might be.

“There again, the guys that are still here are the guys we like. The only way they’re going to get better is if they play,” he said.

Melifonwu saw 12 snaps total in the game against the San Francisco 49ers and nearly picked off a pass in the game, so to hear the Lions might now be set to trust him is an interesting development. Already, it seems Melifonwu will be a player that gets early love as it relates to this and it sounds like he will be ready.

If the last name sounds familiar to fans, that’s because Ifeatu’s brother Obi Melifonwu played in the NFL recently as well. The older Melifonwu didn’t have nearly as much success, but that doesn’t mean the younger one can’t be great. Melifonwu has solid size at 6-3 and is the type of player who can be a better cornerback than some of the options that may go higher than him in the NFL Draft. In college, he put up 88 tackles, 3 interceptions, 19 passes defended and 1 sack. Melifowu might end up being one of the better cornerbacks that comes out of this draft process, and the Lions hope they will look smart to have nabbed him given their major needs at cornerback.

Here’s a look at some of Melifonwu’s best highlights:

Melifonwu will need to come packing the big play ability this week in order to win a tough matchup on the field against a solid opponent.

Attendance boost for lower-league clubs at start of new season

Cristiano Ronaldo Took a Pay Cut to be Back at Manchester United: Know How Much He Earns

Fernando Alonso says Max Verstappen is the best, ahead of Lewis Hamilton

Is Pacos Ferreira vs Tottenham on TV tonight? Kick-off time and channel

MARKET REPORT: Investors urged to get back on board BA-owner IAG

So how tasty (and how healthy) is the McPlant, the first vegan burger from McDonald’s