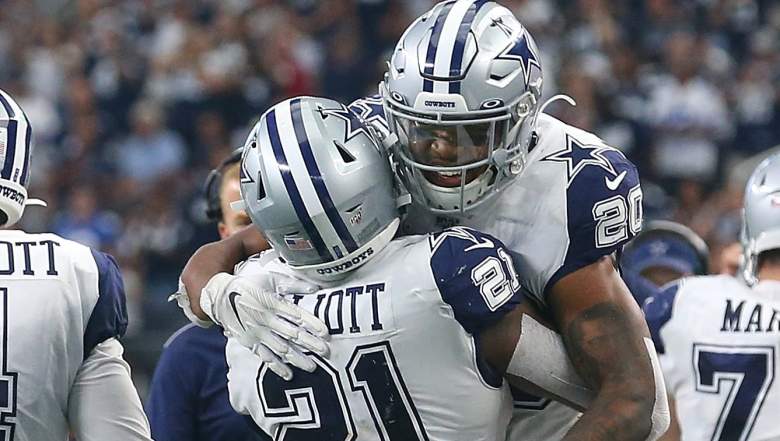 The Cowboys may be forced to choose between Ezekiel Elliott and Tony Pollard.

Dallas Cowboys running back Tony Pollard has been a critical part of the team’s offense, especially as Ezekiel Elliott battles multiple injuries. The buzz around the NFL is that Pollard may eventually be on his way out of Dallas.

Pollard’s name came up as ESPN’s Jeremy Fowler attempted to find out the league’s consensus on the best NFL duos at a number of positions, including running back. Here is Fowler briefly explaining the concept of the story.

“We polled execs, scouts and coaches around the NFL to attempt to find consensus on the league’s best duos at six key positions: wide receiver, running back, offensive tackle, edge rusher, cornerback and safety,” Fowler noted. “While some results were clear-cut, other positions were incredibly difficult. Injuries leaguewide, of course, didn’t help. Key players in some pairings are out for the season and affected the duo dynamic.”

Ultimately, the Browns received the most votes at running back for Nick Chubb and Kareem Hunt. The Cowboys also received votes for Elliott and Pollard. The discussion led to this interesting nugget from an NFL scout predicting Pollard will “do well in free agency.”

ALL the latest Dallas Cowboys news straight to your inbox! Join the Heavy on Cowboys newsletter here!

Pollard Is Under Contract With the Cowboys Through 2022

The good news for Cowboys fans is Pollard is under contract through the 2022 season as part of his four-year, $3.1 million deal. Pollard is one of the bigger bargains on the Cowboys roster with a $850,000 salary this season.

It will be difficult for the Cowboys to keep Pollard given Elliott’s six-year, $90 million contract. The Cowboys will be forced to make a decision at running back after next season. Not only could Pollard command a sizable deal, but the running back will likely be ready to move to a team where he can be the feature back after spending four seasons behind Elliott.

Dallas does have a potential out in Elliott’s deal after the 2022 season, but the Cowboys would take an $11.8 million cap hit if they moved on from the star back, per Spotrac. This likely means Pollard will command more on the open market than the Cowboys are willing to pay, unless the team makes the surprising decision to move on from Elliott.

It has been a great season for Pollard who has already posted career highs in both rushing and receiving yards. Through his first 10 games, Pollard has 90 carries for 495 yards and one touchdown while adding 25 receptions for 224 yards. So far, Cowboys owner Jerry Jones has not been willing to trade Pollard.

“Well, you don’t [consider the contracts] in terms of the ultimate decision, you do what makes the first down, or you do what gets the most yards or ultimately wins the game and that’s where it all comes [down to],” Jones explained during a September 21 interview with Dallas 105.3 the Fan. “The facts are that we really have an outstanding situation here that Pollard gets up on them so fast and can really surprise the defense, he’s stronger than he looks. He just has gotten so sudden, he’s got such a burst.”

Discover more from Heavy on Cowboys↓

Unlock the latest Dallas Cowboys news, rumors and exclusives — direct to your inbox. ↓

What can we expect from Formula One’s title decider in Abu Dhabi?

In a First, Last Two League Games to be Played Simultaneously

‘I Would Rate Mohamed Salah Over Lionel Messi And Cristiano Ronaldo’

This Dividend-Powered Plan Lets You Retire In 7 Years

With 22 Words, the CEO of United Airlines Taught a Bold Lesson in Leadership