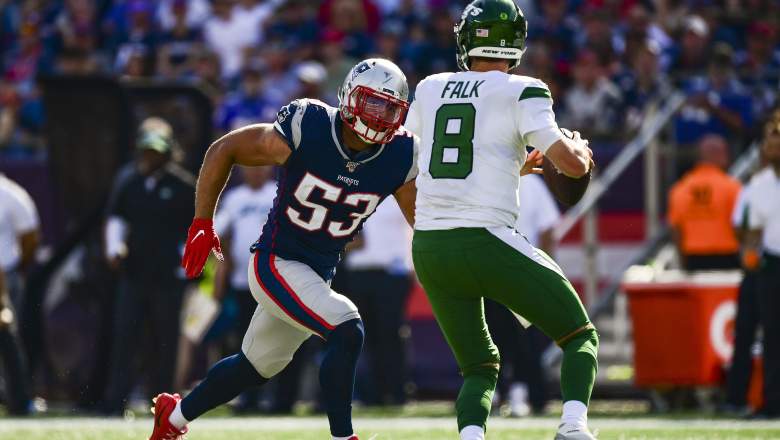 At long last, the New York Jets home opener at MetLife Stadium is less than two days away.

Fans have waited nearly two calendar years for this moment, with the most recent home game having been played on December 22, 2019. Gang Green actually upset the Pittsburgh Steelers in that head-to-head, 16-10. Months later, the world entered uncharted territories as the global pandemic rocked countries big and small.

Like athletes, fans are resilient, especially Jets fans. You better believe that this diehard bunch “can’t wait” to get that crowd roaring on Sunday as the rival New England Patriots come to town with a rookie quarterback at the helm.

Before we all get too caught up fantasizing about Zach Wilson and Robert Saleh’s first regular-season game in front of fans, let’s take a quick look at the Week 2 injury report.

For once, the big injury news heading into a game weekend isn’t Jets-related. New England will be without veteran linebacker Kyle Van Noy, who was officially ruled out on September 17 with a throat injury.

Van Noy just began his eighth season in the NFL and he’s always been a thorn in the Jets’ side, whether with Bill Belichick or Brian Flores in Miami last season. The linebacker’s best attribute is his pass-rushing ability with 24.5 career sacks and one Week 1 sack in 2021.

This is great news for Wilson and this Green & White offensive line that has struggled so far.

Here’s the final injury report of the week for Jets-Pats. Cole (knee), Crowder (groin), Edoga (illness) and Dunn (shoulder) all listed as questionable. Sherwood (ankle) out, as expected. Edoga and Dunn were added to the report today. Van Noy out for NE. pic.twitter.com/r056E7G8jW

Sticking with the Pats for a moment, rookie kicker Quinn Nordin will also miss Week 2 with an abdomen injury, while key players like right tackle Trent Brown, tight end Jonnu Smith and rookie linebacker Ronnie Perkins are all listed as “questionable.”

It appears that wide receiver Nelson Agholor, safety Kyle Dugger and defensive back Jalen Mills will all suit up on Sunday after a string of full practices since Wednesday.

If Brown isn’t able to go, that would make things a lot easier on the Jets’ edge rushers, especially since backup Yodny Cajuste is dealing with a hamstring injury himself. Smith would also be considered a major absence if he’s unable to take the field.

Lastly, Gang Green will see a familiar face kicking field goals, as ex-Jet Nick Folk has been called on to replace Nordin.

Two important offensive weapons will remain on the Jets’ injury report heading into the weekend, wide receivers Keelan Cole and Jamison Crowder. The former missed Week 1 with a knee injury, while the latter was out with a positive COVID test and a groin injury.

Both practiced in a limited fashion this week, but Coach Saleh decided to call Cole and Crowder game-time decisions on Friday. The expectation is that the pair returns in time for the home opener, so perhaps the Jets’ HC is just playing coy to keep Belichick guessing.

The remainder of the injury report for the home side is slim, with one expected absence and two new additions. Rookie linebacker Jamien Sherwood is listed as “doubtful,” but Saleh made it sound like he wouldn’t be available until Week 3 after the Panthers’ defeat. The MIKE-backer has an ankle injury and the Jets signed B.J. Goodson to help fill in at the position this week.

Depth tackle Chuma Edoga and defensive back Isaiah Dunn are the surprises. Edoga has yet to play in game-action all summer due to various setbacks in his recovery. It was a miracle he made the 53-man roster and now it appears a non-COVID illness could sideline him again.

Dunn is questionable with a shoulder injury. The rookie only factored on special teams in Week 1.

READ NEXT: Jets’ Quinnen Williams His Own Worst Critic, ‘in N.Y. You Gotta Win’

India vs Bangladesh SAFF Championship 2021 Live Streaming: When and Where to Watch Live Telecast, Timings in India, Team News

Will Hardik Pandya Bowl in T20 World Cup? Talks on to Include Additional Fast Bowler in Squad by October 15

Stock futures are flat following the S&P 500’s worst day since May, Fed meeting ahead