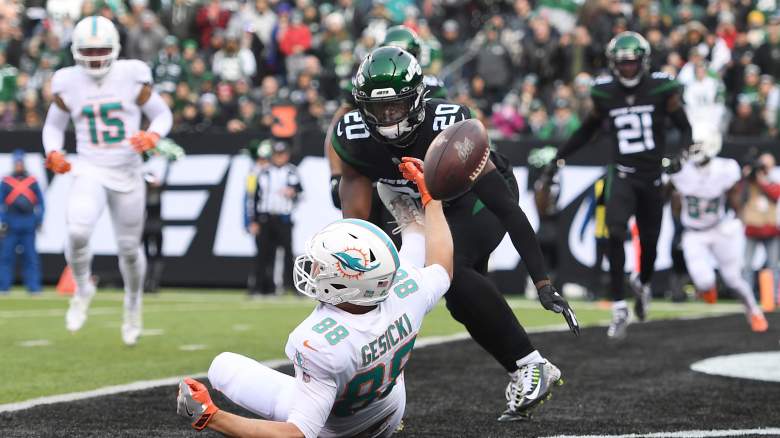 New York Jets safety Marcus Maye defending a pass in the middle of an NFL contest.

The days, hours, minutes, and seconds are counting down as we approach the 2021 NFL trade deadline.

It’ll be the final moment for the New York Jets and every other team in the league to capitalize on players with expiring contracts.

With that in mind, everyone is wondering will the green and white hit the eject button on several players or will they stand pat?

Everything Is Now Set and on the Table

The Jets “are open” to dealing their star-studded safety Marcus Maye according to Rich Cimini of ESPN.

This past offseason they tried working on a long-term contract extension, but it didn’t materialize. So instead, the veteran has been playing on the franchise tag as a short-term band-aid fix to kick the can down the road.

Since then it has been an overwhelming amount of agent tweeting drama, an injury, and questions about his future.

On top of all that, Maye is dealing with pending DUI charges although that isn’t expected to impact his potential trade value since “any league discipline wouldn’t come down until 2022”, per Cimini.

The Jets won’t give Maye away, he is still one of the best players on their team, but they would move him for the right price.

Cimini says the green and white is looking for a “second or third-round pick.”

Back in 2017 the Jets initially invested a second-round draft choice in Maye with the No. 39 pick. So if they could get that back or something similar they would be elated to add another pick to the evergrowing treasure trove of assets heading into 2022.

May Be Time to Get Creative to Make Things Happen

That may be an incredibly high price for a team to pay considering Maye is still owed another $6 million in salary for the rest of 2021 on the franchise tag and he would be a rental.

This is where things get funky.

The best way to reach a destination is with a form of compromise and that may be the best solution for all parties.

If the Jets want to get that day two pick in the upcoming draft that they seek, they may have to eat some of the Maye salary to do it.

That seems like it could be a big hold-up to any potential deadline deal. Although there are a lot of things to consider.

The Jets have been hesitant to commit to the player long-term because of positional value, his age (28), and an off-the-field issue he hid from the team.

This trade deadline provides a perfect excuse for Gang Green to wash their hands of this and get a valuable asset for a player they obviously don’t see a long-term future with.

The Jets have the 12th most cap space in the league, per Over The Cap. So if you have to scratch another team’s back, to get your back scratched, then so be it.

The juice is worth the squeeze here for the green and white. If eating a little bit of salary is the last piece of the puzzle to make this deal happen, then the Jets should acquiesce and get it

Team news and confirmed line-ups ahead of Chelsea vs Southampton

Tymal Mills ruled out of remainder of T20 World Cup

Qatar Grand Prix: Lewis Hamilton on Crest of a Wave Ahead of New Challenge

F1: British Drivers Feel The Force of The Fans at Silverstone

‘It’s great to be home’: Emma Raducanu reunites with parents on return to UK