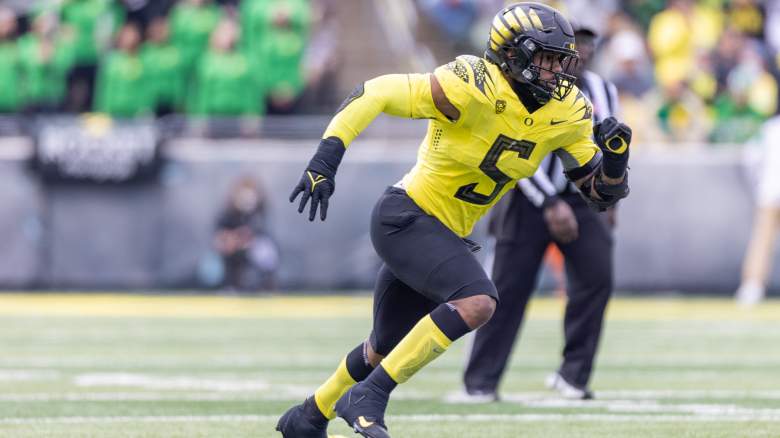 Oregon pass rusher Kayvon Thibodeaux unleashing some havoc in the middle of a college football game.

It’s never too early to start breaking down the NFL draft if you’re a New York Jets fan.

That is especially true in a 2021 season where the team sits at a disappointing 2-6, tied for the third-worst record in all of football.

With an embarrassment of riches upcoming in the 2022 NFL draft, it’s time to take a sneak peek at what could be coming to the team this offseason.

Pro Football Focus has a really cool mock draft simulator that is able to track data from all the people who participate.

Specifically, you can see what positions and what players people are selecting the most for the teams you’re controlling in the simulator.

Trevor Sikkema, a do it all man for PFF, released the data for the top five most mocked NFL teams so far this year, and to no one’s surprise, the Jets were one of those teams.

A Flip in Philosophy Could Be Coming

If the fans are any indication, there will be a clear philosophy change coming to the Jets this offseason.

During the general manager Joe Douglas era which features the 2020 and 2021 NFL drafts respectively, he has yet to select a defensive player in the first two rounds of the draft:

According to the most recent mock draft analytics the two most popular positions fans have selected with the Jets’ highest draft picks have been on the defensive side of the ball.

The fans normally have a pretty good pulse of what their team needs because they follow them closer than anyone else.

The most well-represented position in his latest top-50 draft board is EDGE rusher. Out of his top-15 players, nine of them come on the defensive side of the ball.

After a historically long run of defensive players in the first round for the Jets, from 2010 to 2019 (10 of the 11 players they selected were defenders), it may be time to return to that world.

Aaron Ramsdale aims to grab England opportunity with both hands

IND vs PAK, T20 World Cup: India vs Pakistan’s Past Records at the Marquee Event

How To Increase Yield By Buying Split-Rated Bonds

Durga Puja 2021: How to Make the Lip-smacking Khichdi for the Puja