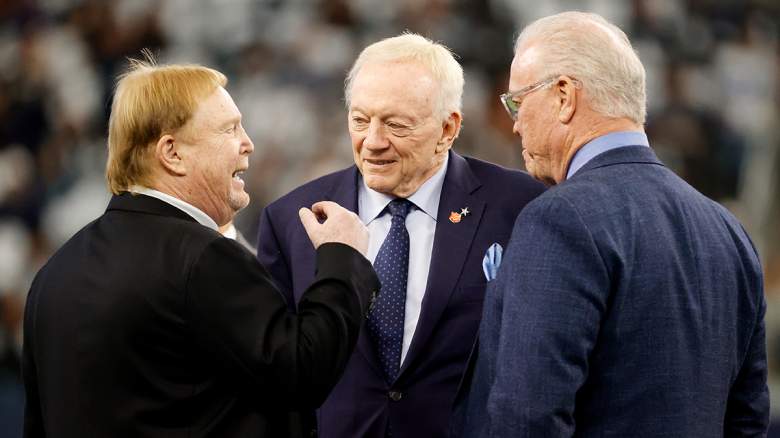 From a penalty standpoint, the matchup between the Las Vegas Raiders and Dallas Cowboys was one of the ugliest games of the year. There were a total of 28 penalties called in the game – 14 by each team. Penalties were a major factor at each stage of the game, including in overtime when Cowboys cornerback Anthony Brown was called for pass interference that put the Raiders in field goal range.

The team ended up hitting the game-winning field goal on that drive. It was certainly a game where the referees inserted themselves as a major factor regarding the final outcome. Despite the fact that each team was penalized 14 times, the Cowboys were quick to blame officiating for the 36-33 loss. Dallas owner Jerry Jones came out immediately after the game and called out the referees.

“This will arguably be the most-watched game other than the Super Bowl,” Jones said, via Jon Machota. “I hate that it got down to just throwing the ball up and getting the penalties to get you big plays. … This is not a criticism of the rules. It is a criticism of the discretion of how you use them and what plays. Everybody knows you can call a penalty on every play, many different ways.

“You have to have a feel for what you’re trying to do in the ball game. This one turned out that way. They did the best way of playing the game with the way the game had to be played with this officiating philosophy. If you knew it was going to be like this all the time, then you would step out there every time and throw 40-yarders, and they’ll let you get your calls.”

Jones Gets Dragged for Comments

There’s no doubt that there were questionable calls made against the Cowboys all game. However, there were plenty of questionable calls against the Raiders, as well, including a false start on center Andre James late in the fourth quarter that should’ve been a neutral zone infraction on the defense. Had that play been called correctly, the Raiders would’ve gotten the first down and perhaps would’ve been able to burn enough clock so the Cowboys didn’t get a shot to tie the game and send it to overtime.

Fans were quick to go after Jones for blaming the referees for his team losing.

I’m sure he was pleased with all of the dubious holding calls on the @Raiders and that ridiculous false start on our center at the 2 min warning though, right? Which one of those DPIs were a bad call? https://t.co/90gWR3BZCu

Had the Raiders lost, they may be signing a similar tune to that of Jones. At the end of the day, both teams were on the receiving end of some really bad calls so it’s difficult to say that one team had the advantage.

Rookie linebacker Micah Parsons has quickly developed into a force for the Cowboys. He had a sack against the Raiders and was constantly giving quarterback Derek Carr trouble in the backfield. One of the most questionable penalties in the game came on a roughing the passer on Parsons. During the play, he somewhat struck Carr in the head with his hand but it certainly wasn’t a strong blow. Parsons wasn’t happy about the call after the game.

“We should be playing football, not tag,” Parsons said, via Dallas News. “You know what I mean? I’m not here to support anybody and play tag like he’s my best friend. I got a job to do. I see he’s outside the pocket, so I’m going to the quarterback.”

It was a rough game all around from an officiating standpoint.

Get more good stuff from Heavy on Raiders

Unlock the latest Raiders news, rumors and exclusives — direct to your inbox.

Messi could return to Barcelona in 2023

Britain’s most haunted hotels: A guide to the inns and castles to book for the ultimate spooky stay