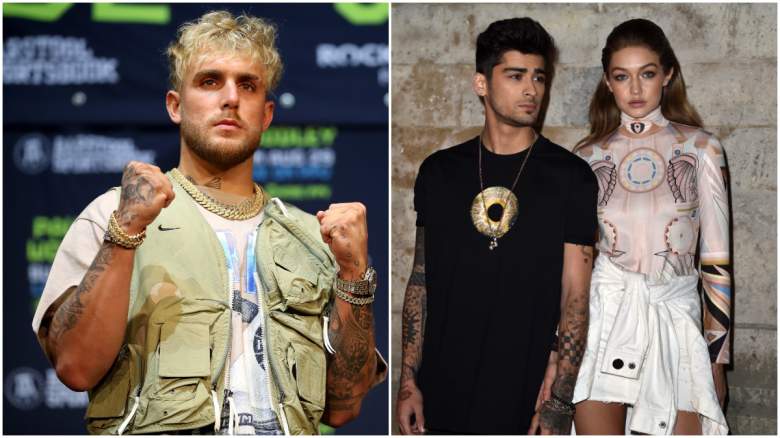 YouTuber Jake Paul has dug up an old tweet from Gigi Hadid praising Zayn Malik in order to taunt the model while she deals with a family scandal.

The YouTuber turned professional boxer has taken to Twitter to roast the model, based on a tweet from more than a year ago.

“Your ‘rEsPeCtFuL KiNg’ punched your mom in the face,” Paul wrote after quote tweeting a comment Hadid posted on February 23, 2020.

“Lol cause he doesn’t care to hang w you and your embarrassing crew of YouTube groupies,” she wrote. “Home alone with his best friends like a respectful king cause he has me, sweetie. Unbothered by your irrelevant ugly ass. Go to bed …”

The tweet she was originally referencing has since been deleted but the The Daily Mail reported a less-than-friendly encounter between Paul and Malik which took place on February 22, 2020, where Paul claims Malik told “him to ‘f*** off for no reason” and “literally started yelling and freaking the f*** out.” The encounter was reported by the outlet as happening after the Tyson Fury vs. Deontay Wilder 2 fight which took place in Las Vegas, NV.

Paul is known for his trash talk and it’s helped him work his way into multimillion-dollar fight nights. But Hadid isn’t someone Paul is trying to fight in the ring, which makes this call-out extra personal.

Yolanda, the mother of Gigi, claims she was “struck” by the One Direction member “last week,” but did not file a police report, according to TMZ.

On Friday, Malik “pleaded no contest to four counts of harassment after allegedly pushing Yolanda into a dresser and calling her a ‘f****** Dutch sl**,” according to The Daily Mail.

Malik was punished with a “nearly year-long probation” and he must take an anger management course and have no contact with Yolanda or her security guard, John McMahon, the outlet reports.

On October 28, Malik tweeted a lengthy statement explaining why he plead no-contest to the charges.

“This was and still should be a private matter,” Malik wrote on Twitter. “But it seems for now there is divisiveness and despite my efforts to restore us to a peaceful family environment that will allow for me to co-parent my daughter in a manner in which she deserves, this has been ‘leaked’ to the press.”

Malik denied the allegations that he struck Yolanda.

“I adamantly deny striking Yolanda Hadid and for the sake of my daughter I decline to give any further details and I hope that Yolanda will reconsider her false allegations and move towards healing these family issues in private,” Malik told TMZ on October 28.

According to People, Malik and Gigi have gone their separate way but will continue to co-parent their daughter, Khai.

“They are not together right now. They are both good parents though,” a Hadid family friend told the outlet. “They co-parent. Yolanda is of course very protective of Gigi. She wants the best for her daughter and grandchild.”

Vulture smashes into nose of plane as it lands in Madrid

What’s the secret to making sure AI doesn’t steal your job? Work with it, not against it