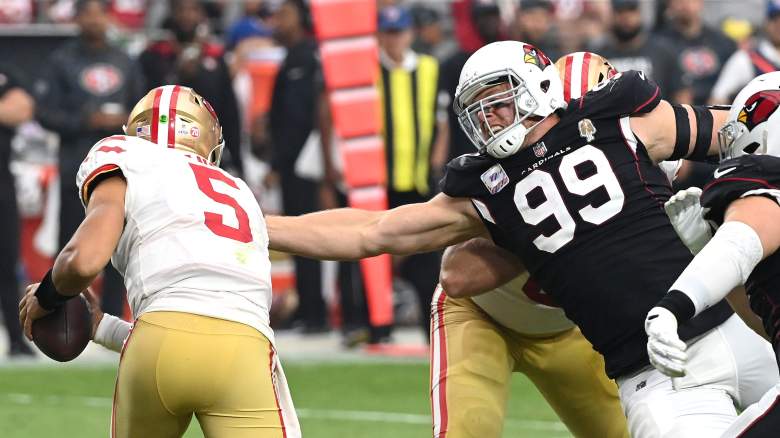 It’s taken the first quarter of the season, but J.J. Watt is starting to look comfortable with the Arizona Cardinals.

Watt had what defensive coordinator Vance Joseph called his best game to date in the Cardinals’ 17-10 victory over the San Francisco 49ers on Sunday, October 10, keeping pressure on rookie quarterback Trey Lance throughout the game and stuffing runs in the backfield.

Watt, the longtime Houston Texans star who joined Arizona in the offseason, had a hand in several big plays against the 49ers, at times resembling the all-around threat that made him the NFL’s Defensive Player of the Year in 2012, ’14 and ’15.

Watt, 32, had three tackles — including two for a loss — and made things difficult for Lance in the quarterback’s first NFL start with team-highs of six pressures and four QB hits. He also batted away a fourth-down pass in the fourth quarter as the Cardinals (5-0) stopped the 49ers (2-3) on fourth down four times on five attempts in the game.

“I think J.J. has played very well,” Joseph said. “He’s getting better and better each week.”

The Cardinals will need that trend to continue Sunday, October 17, when they travel to Cleveland to take on the Browns (3-2) in a matchup of top offenses.

The Browns rank fifth in total offense with 417.6 yards per game, one spot ahead of the Cardinals at 413.2. Cleveland really sets itself apart from the rest of the league in the running game, averaging an NFL-best 187.6 yards per game — nearly 15 yards per game better than the next closest team (Dallas Cowboys, 172.8.)

“It’s a dynamic offense,” Cardinals coach Kliff Kingsbury told reporters. “When you turn on the tape, it’s kind of like, ‘How are we going to stop this?’ You’ve got to pick your poison.”

The Browns boast a potent one-two punch in the running game with Nick Chubb and Kareem Hunt. Chubb is the NFL’s second-leading rusher with 523 yards (104.6 per game), while averaging 5.8 yards per carry. Hunt adds another 295 yards (59 per game) on 5.4 yards per carry.

“They’re a very, very good running team,” Watt said. “They have two backs who are extremely talented, can make the runs, can break the tackles, can see the holes, have great vision. They do a great job.”

Joseph called the Browns “a special group from a talent perspective.” To beat them, the Cardinals will have to “contain the running game,” he said.

“They’ve got two big-time backs. They’re both different,” Joseph said. “With Chubb, he’s a guy who’s steady, breaks tackles. This guy makes every cut, he makes every run read correctly. That’s tough to conquer because if you make a mistake, he’s going to find it. That’s what good backs do.

“Then you add Hunt to the mix. He’s a receiver out of the backfield. He makes the same cuts that Chubb makes. They both can make big plays,” he said.

Both backs have been battling injuries, with Chubb nursing a calf issue and Hunt being hampered by a sore wrist and knee. As of Thursday, October 14, neither had practiced since the Browns’ 47-42 road loss to the San Diego Chargers on October 10, putting their availability against the Cardinals in question.

The Cardinals, meanwhile, have struggled to stop the run, allowing 139 yards per game for fifth-most in the NFL.

Arizona also is banged up on defense, with edge rusher/linebacker Chandler Jones likely to miss the game after testing positive for COVID-19. Jones, who is vaccinated, also had symptoms, Kingsbury said, making it unlikely he can produce two negative tests 24 hours apart in time to play against the Browns.

Linebackers Jordan Hicks (toe) and Tanner Vallejo (hand) also have been sidelined as the Cardinals prepare to play Cleveland. Arizona did get some good news in the secondary, however, as cornerbacks Byron Murphy (ribs) and Marco Wilson (ribs) both practiced Thursday, October 14, after missing the game against the 49ers.

‘I’m Just Doing What I’m Asked to Do’

In Jones’ absence, Joseph said the Cardinals will be turning to linebackers Markus Golden, Devon Kennard and Dennis Gardeck to play larger roles.

They’ll also be counting on Watt to continue his increasingly disruptive ways against the Browns.

Watt, who signed a two-year contract with the Cardinals in March, sat out much of training camp with an injury, which delayed his on-field practice in Joseph’s defense.

After primarily playing defensive end throughout his NFL career, Watt also has been lining up at tackle in certain defensive packages, something he hadn’t done in more than four years.

Despite the lack of sacks, Watt leads the Cardinals with team-highs of 23 pressures, 14 hurries and nine QB hits, according to PFF. He’s also the Cardinals’ highest-graded defensive player through five games at 80.9.

Joseph said Watt has been getting better each week at sticking to his assigned tasks and letting the big plays come to him rather than freelancing to make something happen.

“I think for so long in Houston, J.J. was the main guy so he took some chances,” the defensive coordinator said. “We have plenty of playmakers, so if guys just do their job and stay in their gaps and do it with selflessness, they’re going to make plenty of plays, and that’s what he’s figuring out now. He can make a lot of plays just doing it right.”

Nothing Royal About The Men in Pink’s Fluctuating Season

When is the Community Shield, who is playing and where can I watch?

WWE Crown Jewel 2021: Match Card, Start Times and All You Need to Know about the pay-per-view

I live to win and dare to dedicate my all: Ritu Phogat | More sports News – Times of India

What time is the Perseid meteor shower tonight?