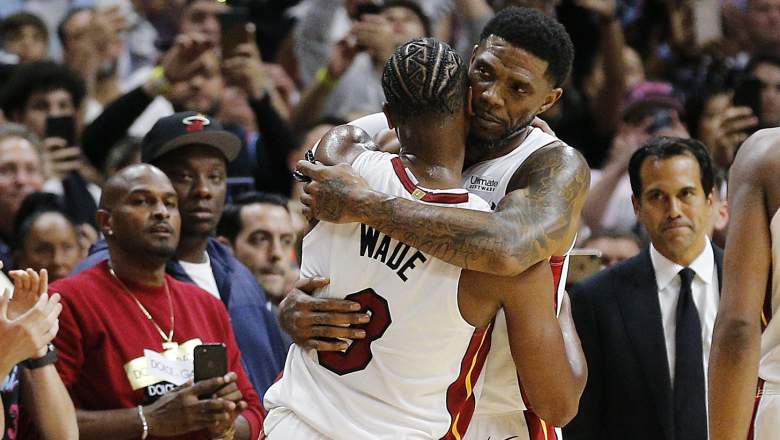 Dwyane Wade #3 of the Miami Heat hugs Udonis Haslem #40 after being taken out of the game during the second half at American Airlines Arena on April 09, 2019 in Miami, Florida.

Udonis Haslem’s name is synonymous with the Miami Heat, as the power forward is in the midst of his 19th season with the franchise. While the veteran hopes to be part owner of the Heat one day, Haslem is still processing the fact that his former teammate, Dwyane Wade, is now part owner of the Utah Jazz.

Before the Heat faced the Jazz on Saturday night, during which Miami won 118-115, Haslem spoke about the three-time NBA champion’s life decisions after retiring from the sport.

The latest Heat news straight to your inbox! Join the Heavy on Heat newsletter here!

While it’s strange for Haslem to see Wade attached to the Jazz, as it is for much of Heat nation, he also respects his ability to grow beyond what’s typically expected of players after they retire.

“The plan was always to not pigeonhole yourself to just be a coach or whatever everybody else says you should do,” Haslem said. “Do what you feel is best for you. Do what you feel you deserve. And do what you feel you’ve earned. So for Dwyane and myself, we’ve always talked about being bigger than just basketball player, than just coaches.”

During Saturday night’s win over the Jazz, Haslem stuck to his role as team captain, keeping his guys focused while remaining on the bench. Wade, however, was in Los Angeles attending Jeeter Day, a carnival-sized celebration for one of the most popular pre-roll brands in California. Like Wade, Jeeter actually started in South Florida before relocating to the West Coast.

While Wade and Haslem are both three-time NBA champions and business partners in numerous South Beach area restaurants, the 13-time All-Star made way more money during his tenure with the Heat. Winderman pointed out that “Haslem has earned in excess of $67 million over his 19 seasons,” while Wade “earned nearly $200 million, and that’s just his salary as an NBA player.”

To be able to buy into the Jazz, a franchise worth over $2 billion, it would cost at least $20 million for Wade’s one-percent stake. Haslem, however, is confident Heat owners Micky Arison and his son, Nick Arison, will make room at the table for him to become an owner one day.

“I love Micky and I love Nick,” Haslem said. “But to be an owner and the face of the ownership, to be partnering with those guys and be in the community, it’d be great for me. And it’d be a great opportunity. And hopefully we can get to that point. But we still got work to do and there’s still many, many things to figure out.”

Haslem Said He Wants to Play 20 Seasons in the NBA

GettyMiami Heat legend Udonis Haslem , a three-time NBA champion, cheers his teammates on from the bench.

Haslem joined the Heat in 2003, but he hasn’t been a permanent part of the rotation since the 2014-15 season. This past summer, Haslem once again signed a one-year veteran’s minimum contract ($2.6 million), the same deal he signed for the 2020-21 NBA season, per Sun Sentinel‘s Ira Winderman.

As the oldest active player in the NBA, Haslem doesn’t just preach Heat culture, he embodies it. He maintains 6% body fat and continues to train hard each and every day as if he’s still in the starting lineup.

“There’s an expectation here and a standard,” Haslem explained. “For me, that’s always been about everybody else. What do I get outta this? 20 years. If I can get 20 years it’ll be an amazing career for a kid that no one thought would play in the league. All my sacrifices, everything I’ve given, the only thing I’ve asked for is to try to get to 20.”

Once Haslem decides to retire, he can start bagging more endorsement deals like Wade. “We’re very competitive,” Haslem said with a laugh. “We’re alpha males and are competitive. We even went head to head about the summer-league game. That was a big deal. And we lost, and I didn’t like that.”

READ NEXT: Jazz Center Sends Strong Message to Miami Heat: ‘We Broke Up’

In a First, Last Two League Games to be Played Simultaneously

iPhone 13 price could rise thanks to difficulties in making chips, rumour suggests

Am I allowed to go on an international cruise from the UK?

Meat and dairy cause twice as many emissions as plant-based foods, study says