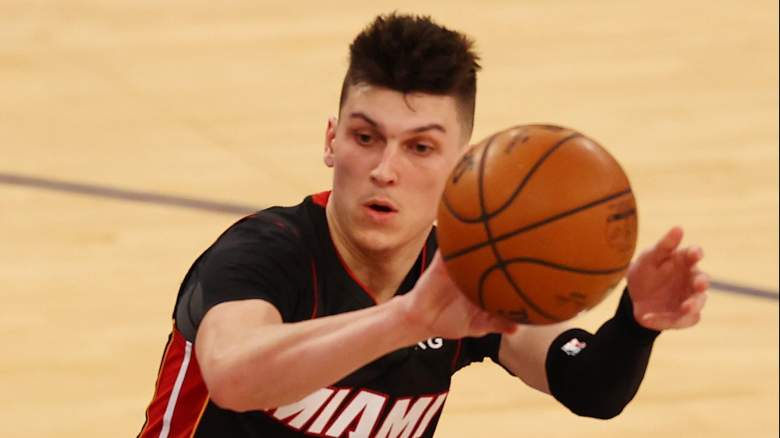 Tyler Herro #14 of the Miami Heat in action against the New York Knicks at Madison Square Garden on March 29, 2021 in New York City.

The Miami Heat are the unofficial winners of the NBA offseason, landing Kyle Lowry, P.J. Tucker, and Markieff Morris in free agency, but the team also made major decisions with high-profile players returning for next season.

The Heat resigned sharpshooter Duncan Robinson to a five-year, $90 million contract, and All-Star Jimmy Butler was signed to a four-year, $184 million extension.

On September 3, the Heat’s future plan with the young “Boy Wonder” that is Tyler Herro was revealed by Sun Sentinel’s Ira Winderman.

The latest Heat news straight to your inbox! Join the Heavy on Heat newsletter here!

“The Heat have exercised their fourth-year rookie-scale option on Tyler Herro,” Winderman tweeted, which will not come as surprise to anyone. Heat president Pat Riley has vouched for the 21-year-old guard, calling him a “core player for us” during his postseason press conference.

By exercising his fourth-year option, they get to keep Herro through next season and on a budget.

After the 2022-23 season, depending on his performance, Herro will be eligible for a massive pay raise. All-Star Bam Adebayo was on a similar rookie contract deal before receiving a five-year, $163 extension from the Heat last year.

Despite having Riley’s vote of confidence, Bleacher Report‘s Grant Hughes dubbed Herro as the Heat’s “most likely player to get traded this summer, which as we know, didn’t happen.

Being mentioned in trade reports is nothing new for the Kentucky alum. His name bounced around in numerous reports prior to the March 25 trade deadline, and again during the offseason, considering he was one of only five Heat players contractually signed to return for the 2021-22 NBA season.

While making an appearance at the Jr. Heat Summer Camp at the FTX Arena on July 21, Herro spoke to Chiang about the ongoing trade reports and rumors.

Herro said, “I’m done listening to all that, honestly,” Chiang tweeted. “I think every time that we’re not playing or even if we are playing, my name is brought up in something. So it is what it is at this point. I’m focused on getting better, getting this team better.”

The reason Herro has emerged as the Heat’s best trade piece is not because of the 6-foot-5 guard’s performance this past season, he finished the year averaging 15 points and five rebounds per game, but because of what the 21-year-old displayed during his rookie year.

“Herro is the one with the 2020 Finals breakout on his resume and name recognition to anchor a high-profile trade,” Hughes wrote. “And if we know anything about the ambitious Heat, it’s that they tend to favor trades of that ilk.  The concerns about Herro’s off-court habits could factor into the Heat’s willingness to deal as well.”

Those “off-court habits” Hughes mentions are a reference to how despite Herro’s sophomore slump, his celebrity status has continued to rise. On April 19, Five Reasons Sports Network’s Ethan Skolnick and South Florida Sun Sentinel’s Ira Winderman reported that his undue star status has become a major concern for the Heat on their Inside the Paint podcast.

Herro’s marketability, however, could be absolutely clutch for a struggling team needing a media boost. Hughes wrote, “Other franchises will talk themselves into Herro’s game and personality. Teams that aren’t winning could use his floor-raising offense and box-office marketability. Moxie sells, and Herro has plenty of that.”

As it stands, Herro will continue showing off his moxie in South Beach for the foreseeable future.

Emma Raducanu qualifies for US Open

PSG’s Neymar back in squad for Marseille trip