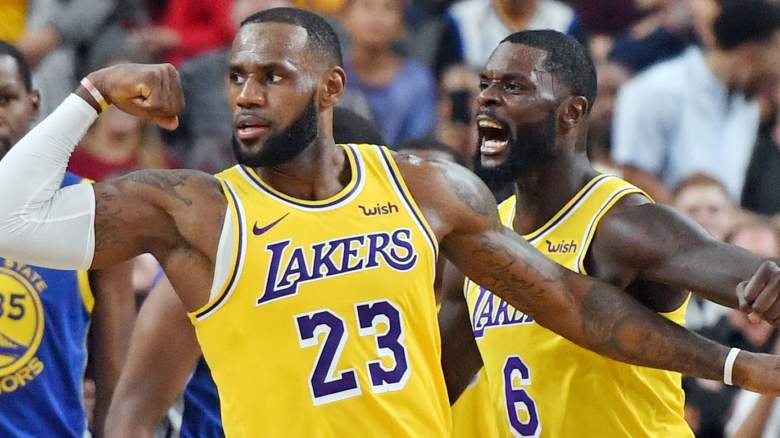 Lance Stephenson and LeBron James were once teammates on the Los Angeles Lakers. However, prior to joining forces the duo were rivals in the Eastern Conference, combining for a viral and simply strange moment.

While facing off in the 2014 Eastern Conference Finals Stephenson blew in the ear of James — a move that has gone down as one of the more GIF-able moments in NBA history.

Stephenson spilled the beans on the moment during a recent Q&A with Hoops Hype.

“I didn’t have it prepared,” Stephenson said. “It was all in the flow of the game. Being out there, competing. Everybody in the league is competitive, and wants that one thing; to win the game. Sometimes you do whatever it takes to win the game. That guy is a tough guy to guard, so you got to bring your all, and that’s what I did.”

Stephenson admitted he never thought he’d team up with James but was thankful it happened.

“I didn’t think that would happen. It was a great experience learning from all the veterans that were on that team,” Stephenson said. “I feel like we had a lot of guys that helped me out and led me to the game that I know now.”

Stephenson last played in the NBA with the Lakers during the 2018-19 season. He suited up for the Liaoning Flying Leopards of the Chinese Basketball Association in 2020 and has curently been playing with the Grand Rapids Gold of the G-League. He’s averaging 19.5 points per game to go with 7.4 rebounds and 2.6 assists.

During his time with the Lakers he averaged 7.2 points in 16.5 minutes off the bench. It was a disappointing year for the Lakers as a team, going 37-45 and missing the playoffs. It was James’ first year in Los Angeles and he ended up missing a good chunk of time with a groin injury. That being said, Stephenson brings experience to the table and was a key piece of the Pacers in 2013 and 2014 when they made it to the Eastern Conference Finals.

Stephenson is a career 44.4% shooter from the floor and 31.5 percent from beyond the arc. He also attempted a comeback in 2020 but did not get any bites for a contract. He also held a private workout for teams this offseason. Stephenson is confident that he could be a veteran bench piece for a contending squad, providing defense and some shooting.

“I definitely want to get back to the league. My body and my mental can help a team out. I can bring that veteran experience, I got a lot to offer,” Stephenson said. “I can help a team out with hitting open shots, knowing where to be at on the defensive end, making smart plays, and just being that guy that can be a leader, and help guys.”

Lakers Already Have Lot of Veterans

If Stephenson lands back in the NBA, it’s unlikely he’ll be wearing purple and gold. The Lakers have a bevy of veterans with similar skill sets to Stephenson and he wouldn’t add much to the roster unless Rob Pelinka and Frank Vogel felt he changed his game that much in the G-League.

There’s a chance Stephenson could end up back in Indiana, where he came up and made a name for himself.

“Just being in the NBA is going to be great for me. It doesn’t matter what team I end my career with,” Stephenson said. “But you know, Indiana is like home for me. It will always be great to go back there.”

Get more good stuff from Heavy on Lakers

Unlock the latest Lakers news, rumors and exclusives — direct to your inbox.

Real Madrid have found their own Neymar Jr.

Is Leicester vs Man City on TV today? Kick-off time, channel and more

What every team still needs to reach Champions League last-16

What Medical Researcher Training Can Learn From the ‘Yellow Berets’

Bulls Players Gearing up for Returns With G League Stints