Tall order but Xavi can fix things at Barcelona 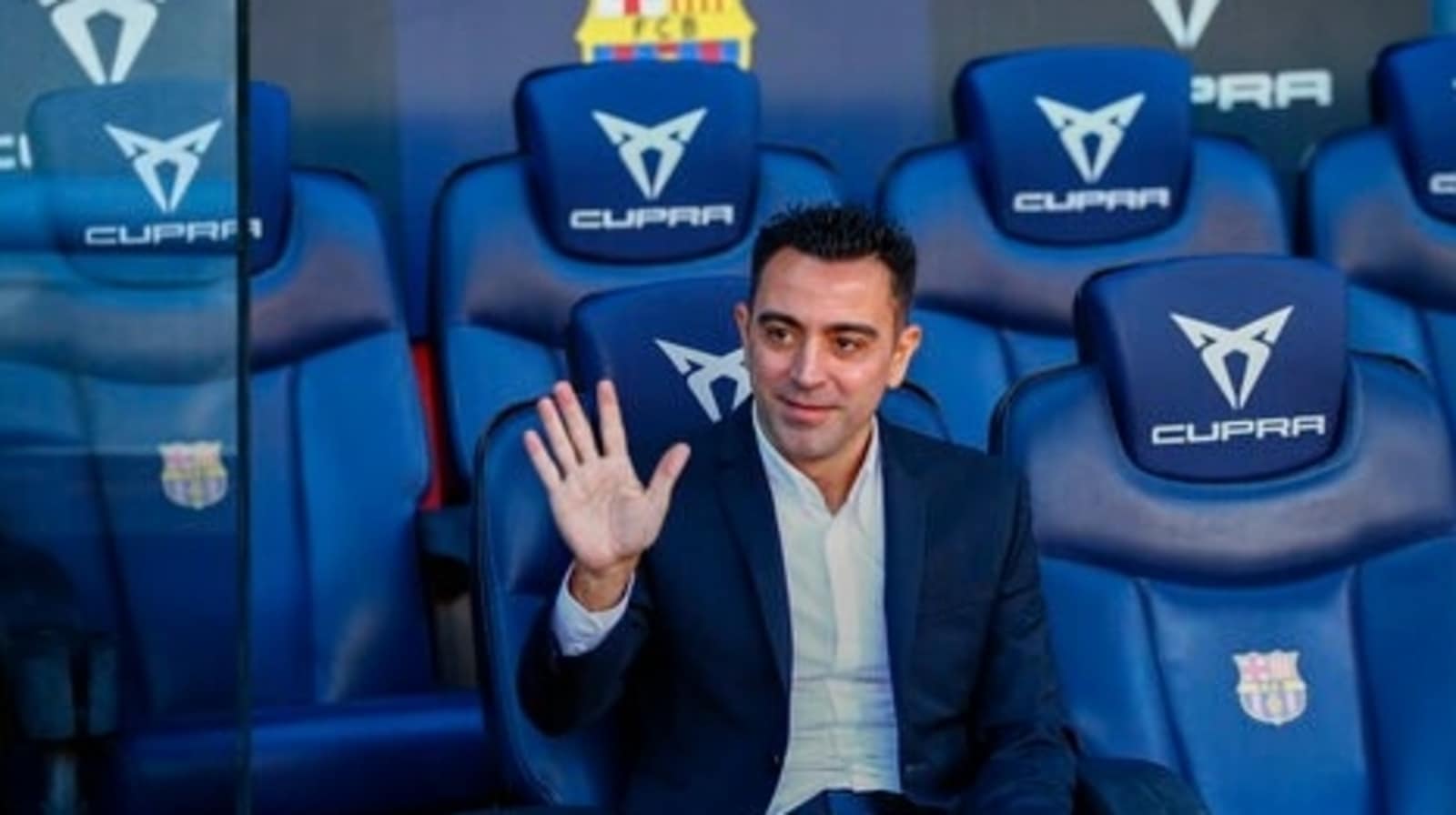 There is a Barcelona story involving Xavi that didn’t end well. It involved him taking on a judo challenge from teammate Boudewijn ‘Bolo’ Zenden. Xavi was “leaning with one hand on a bed,” the Dutch midfielder had said. The bed, Zenden told FourFourTwo, had wheels and Xavi slipped, dislocated a shoulder and was out for a few weeks.

Appointed Barcelona coach till 2024, Xavi’s new assignment has that ‘bed on wheels’ feel to it. Barcelona are ninth in La Liga having lost more than they have won and the Camp Nou is often more empty than full. On the day Xavi’s appointment was announced, they blew a 3-0 first-half lead and were held to a draw by Celta Vigo.

In the Champions League, they have lost 0-3 to Bayern Munich and Benfica. The only team Barcelona have beaten is Dynamo Kiev who are at the bottom of Group E. In a recent studio show, Thierry Henry, who has won the Champions League with Barcelona, replied in the negative when asked if he thought Barcelona would make it out of the group stage, something they have done 17 seasons in a row.

To all this, add Barcelona’s financial problems. They have a debt of 1.3 billion euros. They have also taken a loan of 1.5 billion euros to refurbish Camp Nou. That, along with La Liga’s salary cap, means Xavi, having inherited a squad nowhere close to the abilities of the ones he played in, can forget splurging on players in the near future.

So, on Luuk de Jong, who is on loan from Sevilla, Memphis Depay and Sergio Aguero, who was released by Manchester City, Xavi will have to trust. And on former teammates Jordi Alba, Gerard Pique and Sergio Busquets, who are 32, 34 and 33 respectively. Not too old but Xavi was 34 and listless in the 2014 World Cup which had defending champions Spain exiting without a whimper.

There is also the shift from the Barcelona way of playing that he has to deal with. One that saw them use a low block at home against Bayern in September. Barcelona didn’t have a shot on target in that game; they had one against Benfica and two in a 0-2 away loss to Atletico Madrid last month.

“You have to be realistic,” coach Ronald Koeman had said after the loss to Bayern. It is something Barcelona officials, members and fans, see differently from Koeman whose ticket to club immortality is scoring the winner in the 1992 European Cup final. Koeman wasn’t the first coach at Barcelona to have spoken about the need to recalibrate expectations. Ernesto Valverde and Quique Setien had done that too but neither lasted long; Valverde going after two league titles because the style wasn’t attractive. And when Koeman’s hand was forced by injury, the reaction to Barcelona deviating from its philosophy of possession, passing and panache—often with graduates from the club’s famous academy—was far from pleasing.

“Barcelona’s style is genuine and non-negotiable,” club president Joan Laporta had said. “At Barcelona, we like to have the ball and attack. (Johan) Cruyff showed us, we want football which is spectacular while winning. More is demanded of the Barcelona coach than any other coach: Good play, and results.” As if that wasn’t enough, Laporta had also said: “There are no transitional seasons at Barcelona.”

But Xavi didn’t baulk at the idea of taking the job. “The Camp Nou has always been my home,” said Xavi in a video released by Barcelona for whom he played 767 games in 17 years, winning La Liga eight times and Champions League four times.

Xavi’s appointment comes at a time when, given the performance of Ole Gunnar Solskjaer, Andrea Pirlo, Frank Lampard and Koeman, the idea of getting a club legend to return as coach isn’t working. “But sometimes you need a reference; you need to remember how you won La Liga and the Champions Trophy. You need to refresh memories, tell people this is our style,” said FC Goa coach Juan Ferrando on Monday, explaining why Barcelona got Xavi.

For nearly eight years, Xavi epitomised how a club and his country played. He would often register over 100 passes in a game and there would be nights when Xavi made more passes than the rest of the midfield. A picture of Xavi about to essay a left-footed pass as he is surrounded by five Deportivo la Coruna players tells its own story as does his three assists in the final of the 2012 Euros.

“There are lots of players who win things, but few who lay down concepts, ideas, who change the way we think—Xavi did that,” Julen Lopetegui, the former Real Madrid and Spain manager now in charge of Sevilla, has said.

Like Solskjaer helping Manchester United heal after Jose Mourinho left, Xavi’s arrival should feel like fresh air at Barcelona. Being a club and country legend, he will be given a longer rope. Barcelona have looked within for the head coach—Pep Guardiola, Tito Villanova, Luis Enrique, Carlos Rexach, Cruyff, Lazlo Kubala, the list is long and goes up to Jack Greenwell, who played for the club from 1912 to 1916 and took charge in 1924—so this is hardly new.

Even when he was running Barcelona and Spain from the centre of the pitch, Xavi was known to be a keen thinker on the game. One who would often get into discussions with coaches on formations; one who would debate with Vicente del Bosque why Spain should play 4-3-3 like Barcelona. He got his coaching badges in 2019 and has spent most of his post-Barca life getting ready for this.

“People might say I am not prepared, but I am,” he has said. “I feel ready to coach Barca, I am honest and I know the club and everything around it.” In 97 games as coach at Al Sadd, Xavi delivered seven trophies including the Qatar Stars League last term.

After finishing as a player at Al Sadd, Xavi refused to take up coaching jobs in Europe because in Qatar he would get the experience of managing in the Asian Champions League. “I can’t take a Ferrari or an ocean liner, I have to start with a little boat, with a small car, test myself and gain experience,” he told Marca in 2019. “The idea is to start as a coach in Qatar, that there is not so much pressure, to prove myself and to gain experience; and the goal is to return to Europe and mainly to Barcelona.”

That may have happened earlier had Victor Font and not Laporta had won the presidency race. Xavi, according to reports in the Spanish media, had drawn up a plan for immediate transfers and how to restructure the club’s football set-up. Despite Laporta, some of Font’s candidates such as Jordi Cryuff have returned to Barcelona. Including his brother Oscar Hernandez, Xavi is also likely to get most of his staff over from Al Sadd.

When Xavi and Barcelona were inspiring the world to play their way, many key players were 26-27. “From then to 30, most players are at their best,” said Ferrando, who is from Barcelona and has worked at the club and at Espanyol.

The current Barcelona squad does not have that and Xavi will be under pressure to change their playing style and yet get them to win. With a more balanced squad, Thomas Tuchel did that at Chelsea. But among those who are sure Xavi can fix this is Guardiola. “I don’t have any doubts that he’s ready to do the job,” Guardiola has said. “He has more experience right now than I had when I took over the club at Barcelona.”

The Beginning of the End for Test Cricket, Says Steve Harmison on Cancelled Fifth Test