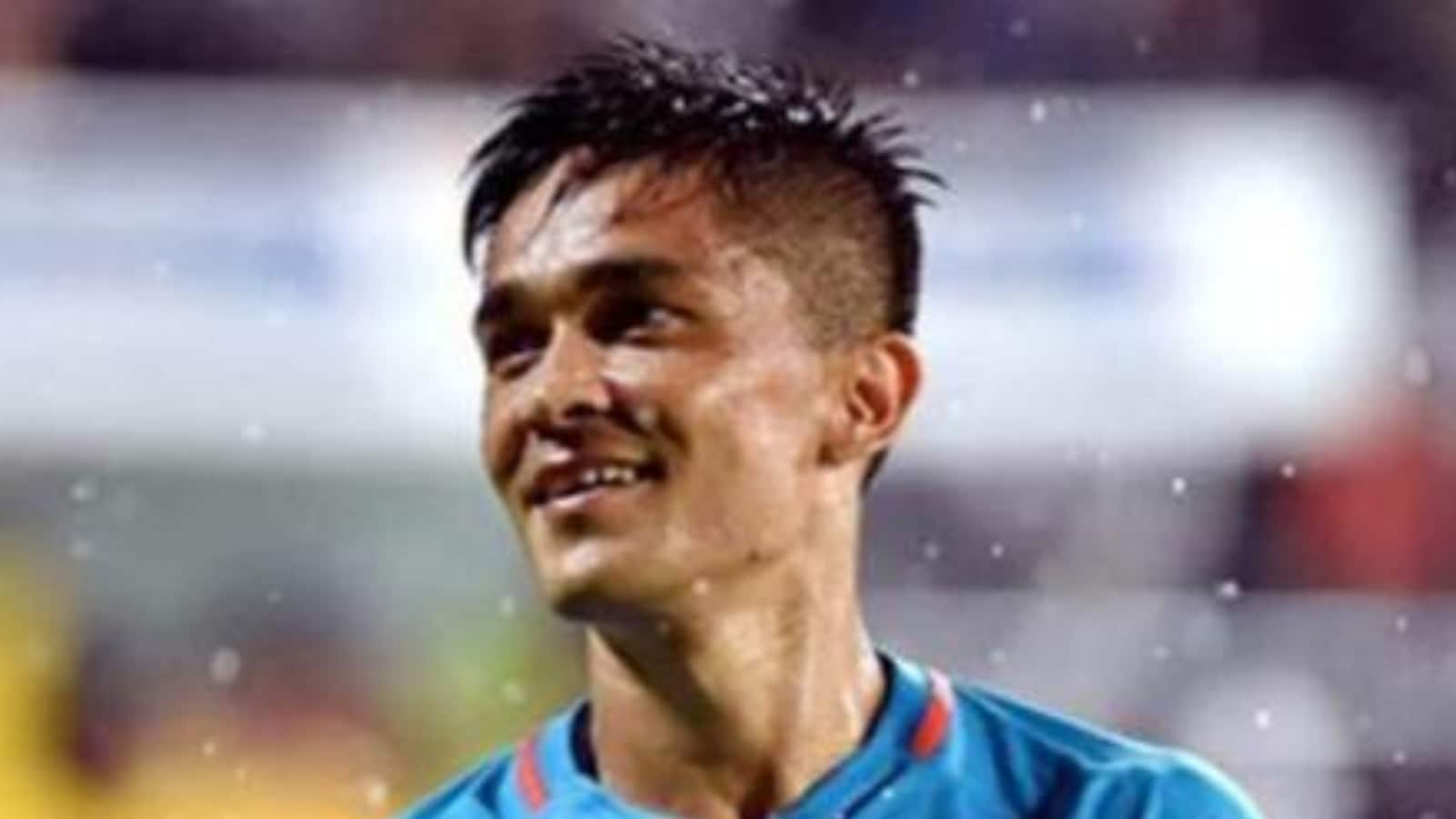 Indian men’s football team talismanic Sunil Chhetri has lead the ‘Blue Tigers’ ever since he first donned the national side’s shirt back in 2004. Over the next 16 years and with a record 124 matches, Chhetri is still leading the line and scoring goals for India.

The 37-year-old overtook the Brazilian legend Pele on the list of most international goals with his 79th strike in the ongoing 2021 SAFF Championships match against Maldives on Wednesday.

During a press conference on Thursday before India’s clash against Nepal in the final, Chhetri shrugged aside the idea of comparisons.

“Everybody who knows football knows that there is no comparison whatsoever (with Pele). I am happy to keep playing and scoring for my country. That is all I want,” he said.

“Very few footages of the great man (Pele) but from whatever I can see, he was a dynamic and powerful footballer. Football was different in those times, the game was brutal at times then. Despite that he scored so many goals and that speaks of his extremely great achievement,” he said.

Chhetri is now tied in sixth place with Zambia’s Godfrey Chitalu on 79 goals. Only the likes of Argentina’s Lionel Messi (with 80 goals), Ferenc Puskas (with 84 goals), Mokhtar Dahati (with 89 goals), Ali Daei (with 109 goals) and Portugal’s Cristiano Ronaldo (with 115 goals).

When asked about being the third behind Cristiano Ronaldo and Lionel Messi in the list for most goals among active players, Chhetri asserted that he is just intent on focusing on his own game and enjoy his time left as a professional footballer.

“There is no comparison between us. If we are all happy that I am able to score for my country that is sufficient. As far as comparison is concerned, there is no comparison. We all are happy that our player scores for the country and has been doing his best. That’s all it is about and there is nothing much to it. So, as I have said this before, appreciate them for a few minutes and ignore these numbers,” said Chhetri.

Chhetri, when asked about what his state of mind is or his motivation when he steps out onto the field for India, he said: “Gaali khata hun, ya log tarif karte hey… (People abuse or they also praise). Everything I try to forget, I go there and try to do my best. Missing, I will miss goals, scoring I will score goals but all this we will talk once I am done.

“Because I don’t want to regret that I could have done this and that. I want to do everything now,” Chhetri added.

When the question veered towards how long he intends to keep playing and how he still manages to motivate himself, Chhetri remained pragmatic.

“I tell myself, everything is going to end very soon, which is why I keep myself away from all the noise, be it criticism or praise, I forget it,” he said.

“I go there and try to put in a shift. Because I know, it’s gonna end soon. And I don’t want to leave any stone unturned or have any regrets. I want to give everything now.”

“Stop crying, stop rejoicing stop over-celebrating, stop putting yourself down because all these will end very soon. Right now I will pick up myself, go there and try to give my best because I know it’s a fact that it’s going to end soon,” Chheri added.

Chhetri though went onto add that, “SC11 is not going anywhere for next few years. So just relax.”

When asked when he does indeed retire, who his successor will be or the question of ‘who is the next Sunil Chhetri’? he said that India doesn’t need another him but someone who can be better than him.

“Manvir is one, I’m really hoping he continues scoring goals. Rahim Ali is one, you haven’t seen much as a No. 9 because he plays on the wing (for his club side Chennaiyin FC). The lad is really strong and talented. If you are talking about goals, then I would put my money on Anirudh Thapa. He is a brilliant player to have and someone who has everything, with a knack for scoring. Liston gives me a lot of hope. He has a knack for scoring and I can tell you this from what I’ve seen in training. He hasn’t delivered yet in games but he’s young and the goals will come. Rahul KP from Kerala (Blasters) has a huge potential and is someone who is hungry for goals and is always there. They will come,” he said.

Chhetri then went onto to praise the seniors in the side like Subhashish Bose, Rahul Bheke and Gurpreet Singh Sandhu for stepping up and helping guide the youngsters. He also praised the youngsters in the current side for their performance at the SAFF Championships.

“Surely the performance of some of the youngsters. We talked about Apuia (Ralte) and Suresh (Wangjam). (Mohammad) Yasir did really well, he has really surprised me. I think Liston (Colaco), starting the game and then coming (on as a change), is a proper talent. Everyone is chipping in. The coach has given a lot of players chances and everyone who came in has done really well.”

“Also, these youngsters are on social media and they read everything that is talked about though I’ve told them a million times not do it. And you could see the morale going a little down. But thankfully we could control it and what you saw was the youngsters coming and performing. When you see what Suresh, Yasir and Apuiah are capable of, you know and then you start feeling comfortable,” Chhetri said about the continuous improvement in the team’s performance.

Even though he admitted that India have not played up to expectations in the first two matches which they drew against Bangladesh and Sri Lanka, Chhetri sounded positive for the final against Nepal.

“It was a topsy-turvy beginning for us in the tournament. Not scoring against Sri Lanka was unacceptable. We missed a lot of chances against Nepal also. We were not playing against the Qatars and Japans and UAEs of the world,” he said.

“Beating a tough team like Maldives in Maldives and that also in a hostile environment (home fan support) was the way we needed to play. We are the dominant side in this region and I think we are peaking at the right time and we can go all the way in the final,” Chhetri said. Chhetri confessed the mood in the Indian camp was upbeat after their uptick in performance, the final will be not easy.

“We are the dominant side in this region – and I’m not putting any pressure on ourselves – but now that we are in the final, we should go all the way and we’ll try our best to do so.”

“They are a very good team and even though they have never won the SAFF title, it will be a tough match and we will have to play good football against them,” Chhetri added.

Leading Roma in Derby Against Lazio is a Privilege – Jose Mourinho

Why football should heed warnings about heading and brain damage

On College Football: What Is The Value Of A Rivalry Game?

Roger Federer out for ‘several months’ after confirming knee surgery