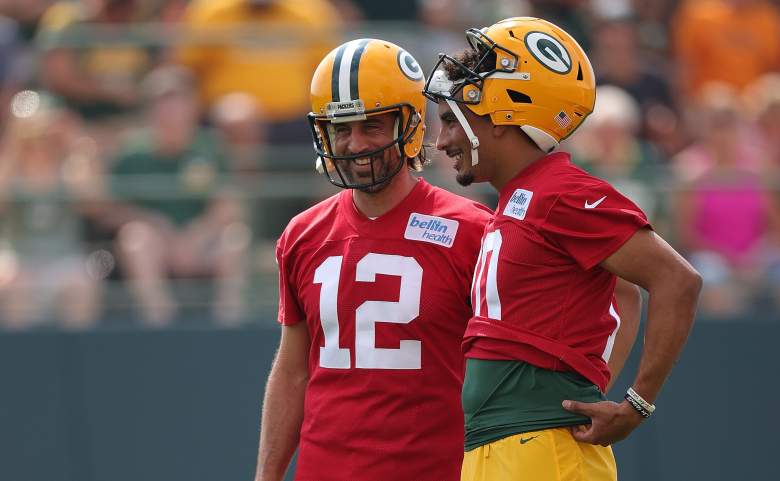 Jordan Love and Aaron Rodgers of the Green Bay Packers work out during training camp.

ESPN analyst Dan Orlovsky was active for 12 seasons in the NFL, spending the bulk of his playing career with the Detroit Lions. The former quarterback joined ESPN as an analyst shortly after his retirement in 2017, and he often pays extra attention to the position he used to play when forming his commentary and analysis.

ALL the latest Packers news straight to your inbox! Join the Heavy on Packers newsletter here!

Love played in two of Green Bay’s three preseason games, completing 24 of 35 passes for 271 yards, a touchdown, an interception and a rating of 89.7. While Love looked solid and steady in his debut in the Pack’s first preseason game against the Houston Texans, he looked shaky and off-kilter at times in the final preseason contest against the Bills.

Love threw one red zone interception to Buffalo defensive back Micah Hyde on one questionable throw, killing an impressive drive in the process:

Love was off balance and shaky on both throws, and Twitter, as it always does, noticed. Orlovsky in particular saw those plays and tweeted the following warning to the young Packers signal-caller: Stop watching Aaron Rodgers and imitating what he does.

“Jordan Love better stop watching Rodgers and his off platform/fade away/jump throws and thinking he can already simulate them,” Orlovsky wrote on August 28.

Getting him into trouble and in bad habits…

“I think for the most part he’s done a nice job,” Packers coach Matt LaFleur said about Love on August 28, via Rob Demovsky of ESPN.

LaFleur acknowledged the same plays Orlovsky referred to, and said the young QB was going to learn from them. “Certainly these are teachable moments, and I think you have to experience those and go through those in a game setting to really learn from them, so I’m pretty certain that he will learn from those mistakes and hopefully he doesn’t repeat them,” the Packers coach said.

“I just told him that you can’t ever just risk it quite like that unless it’s fourth down and the game’s on the line, then certainly you can throw one up,” LaFleur added, per Demovsky. “But we never want to take points off the board and those, the interception and then the one at the end of the half, certainly could’ve taken points off the board.”

While it’s great Love has a future Hall of Famer to learn from in Rodgers, Orlovsky does have a point: Rodgers is a one-of-a-kind generational talent, and few if any can emulate the off-balance throws he has made over his career. If Love is watching Rodgers and trying to imitate what he does on the field, it very likely won’t end well.

That said, Kyle Malzhan of WFRV Local 5 Sports also pointed out that it’s the norm for young quarterbacks to make plays like this during the preseason, as they’re just learning and testing the waters, seeing what they can and can’t get away with.

Here’s a side-by-side comparison of two young backup QBs in the NFL, playing in a #Packers preseason game, & making a questionable throw that resulted in an interception.

Jordan Love is on the left. Aaron Rodgers is on the right.

A big part of the preseason is LEARNING MOMENTS. pic.twitter.com/rerExAhXVj

While Orlovsky has a point, LaFleur is right — these are teachable moments for Love, who has a history of showing he can learn from his previous errors, and that’s likely what he’ll do here.

READ NEXT: Packers Add Another New Specialist to Challenge Starter

El Clasico: Ansu Fati and Vinicius, which one will shine?

F1: Max Verstappen Will Not Admit to Feeling the Pressure, Says Hamilton

Football Legend Pele Says he is Doing Well After Surgery