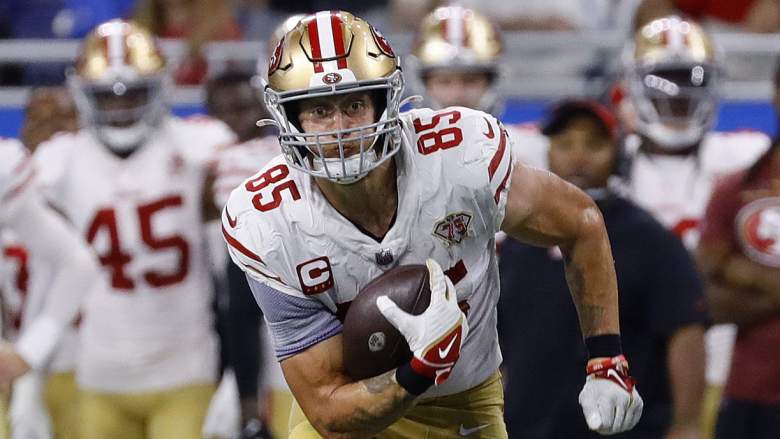 The first thing that jumps out on tape about George Kittle is his ability to run after the catch. That’s when the All-Pro tight end for the San Francisco 49ers goes into cyborg mode, obliterating anyone in his path. Kittle should probably register his arm as a lethal weapon.

Kittle has been known to shove his forearm and hand into the helmet of unsuspecting defensive backs to pick up tough yards. There’s plenty of film of him terrorizing opposing players and Eagles cornerback Darius Slay has watched all of it. Slay thinks the Madden NFL video-game franchise needs to update their ratings on Kittle’s “mean stiff-arm.”

“As a collective, we just have to attack him and not let him attack us,” Slay told reporters. “Probably the best tight end at run-after-the-catch in the league right now. Mean stiff-arm, his stiff-arm should be on 99. He’s a very talented guy, works hard, willing to block and do everything a tight end needs to do.”

The 6-foot-4, 250-pounder was unstoppable the last time the Eagles and 49ers met on Oct. 4, 2020. Kittle secured all 15 of his targets for 183 yards and a touchdown, a performance that expedited Nathan Gerry’s Philly exit. He has 17 receptions for 205 yards in two career games versus Philadelphia. (Editor’s note: Kittle’s stiff-arm is only rated 85 in Madden NFL 22).

Now he’ll be facing a much different Eagles’ defense under new defensive coordinator Jonathan Gannon. He knows 49ers head coach Kyle Shanahan is a master of disguise and misdirection, so it’s all about keeping it simple. Gannon compared it to being in a “phone booth.”

“I think a lot of it’s just shrinking it down for our guys, ‘This is where you put your eyes, this is how you play.’ From there it’s football,” Gannon said. “There’s no call that we’re going to call that’s, like, the perfect magic call versus Kyle Shanahan. It’s our guys executing at a high level, destroying blocks, tackling, covering. That’s what the game comes down to.”

The latest Eagles news straight to your inbox! Join the Heavy on Eagles newsletter here!

Jimmy Garoppolo remains the starting quarterback for the 49ers, but the team inserted rookie Trey Lance on a few gadget plays in Week 1. Lance saw four total snaps and attempted one pass, which went for a five-yard touchdown. He also ran three times for two yards.

Javon Hargrave says #Eagles preparing mainly for Jimmy Garoppolo, not Trey Lance. He only had a handful of snaps. Jimmy G played in a Super Bowl. #FlyEaglesFly

The Eagles are preparing for Garoppolo to take the bulk of the reps again, although Gannon isn’t numb to what Lance can do. San Francisco’s quarterback tandem reminds him of what the New Orleans Saints were doing a few years back with Drew Brees and Taysom Hill.

Eagles head coach Nick Sirianni was asked if he adheres to any gameday superstitions on Friday. The 40-year-old said he paid too much attention to them early in his career, things like sitting in the same seat or wearing certain clothes. Not anymore.

“I guess my superstition, or my routine is to not be superstitious,” Sirianni said. “That’s really the fact. I think a lot of coaches are, and they’ll be like, ‘Whoa, we sat here last week.’ I’ll purposely sit somewhere else. That’s just me.”

Who is Cameron Norrie? The new British No 1 starring at Indian Wells

Google and Facebook say on-campus workers must be vaccinated